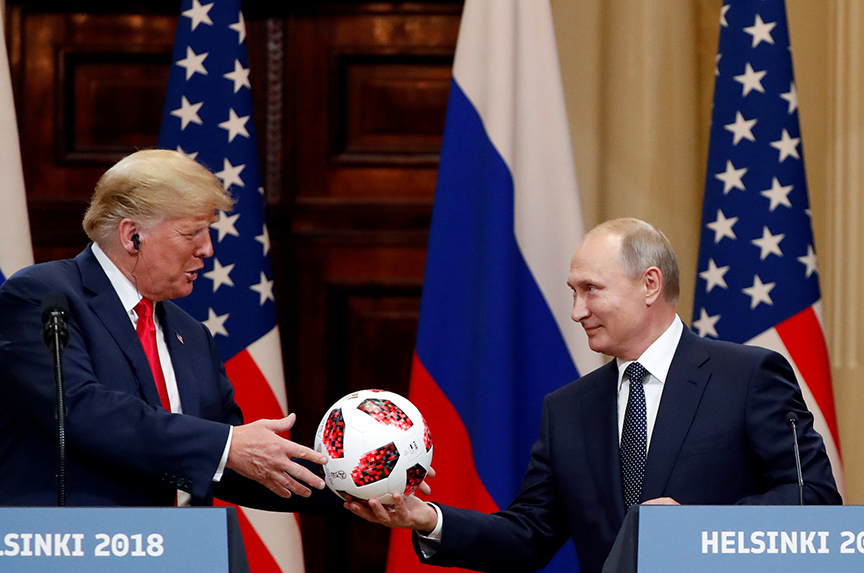 US President Donald J. Trump is expected to meet his Russian counterpart, Vladimir Putin, at the Group of Twenty (G20) summit in Buenos Aires later this week. Is that a good idea in light of Russia’s latest aggression toward Ukraine and the somewhat stymied success of past meetings between the two leaders? In an interview with The Washington Post, Trump left open the possibility that he might, after all, cancel the meeting over the incident in the Kerch Strait. “Maybe I won’t even have the meeting,” he said.

Daniel Fried, a distinguished fellow in the Atlantic Council’s Future Europe Initiative and the Eurasia Center, said: “A meeting would make sense if, but only if, Trump is willing to send the right message to Putin, and the president’s track record doesn’t lead to confidence.”

[UPDATE: Hours after the Kremlin confirmed that Putin would meet Trump in Argentina on November 30, the US president cancelled the meeting over the crisis in Ukraine. “Based on the fact that the ships and sailors have not been returned to Ukraine from Russia, I have decided it would be best for all parties concerned to cancel my previously scheduled meeting…in Argentina with President Vladimir Putin. I look forward to a meaningful Summit again as soon as this situation is resolved!” Trump tweeted.]

Trump and Putin have met three times—twice at the G20 summit in Hamburg in July of 2017 and then in Helsinki a year later. Åslund said the meetings have produced “no results whatsoever that could be of any benefit to the United States.” Furthermore, he pointed out, the meetings were private with only interpreters present.

The G20 summit will be convened in Buenos Aires on November 30 and December 1.

“If a meeting takes place [in Buenos Aires], as will probably be the case, the least one should call for is that several US officials, outside a very tight Trump circle, are present,” said Åslund.

Fried agreed that previous Trump-Putin meetings have not produced much by way of substance. In fact, he argued, these meetings may have been to the detriment of the United States.

“The July 16 Helsinki meeting was framed by Trump’s pre-meeting statement that problems in US-Russia relations are principally the fault of the United States and his press conference fawning over Putin,” Fried said. “This was perhaps the worst showing by a US president in any meeting with a Russian counterpart though, fortunately, the strategic consequences were scant.”

Fried said Trump could undo some of the damage from the Helsinki meeting by sending Putin “a clear message and making clear that he had done so.”

“That would not prove difficult for past US presidents, though President Trump has yet to convey such a message,” he added.

While in general meetings between US and Russian leaders are a good idea, not all such meetings work well for the United States, Fried contended.

“Dangers include overconfidence that the Russians can be charmed (Franklin D. Roosevelt with Joseph Stalin at Yalta in 1945) and lack of preparation leading to a defensive crouch projecting weakness (John F. Kennedy with Nikita Khrushchev in Vienna in 1961),” Fried said. “Good meetings take place when the president’s approach reflects a coherent strategy grounded in US interests and consistent with US values (such as Ronald Reagan’s and George H.W. Bush’s meetings with Mikhail Gorbachev and many of Bill Clinton’s meetings with Boris Yeltsin).”

“In dealing with President Putin,” Fried said, “the US president needs to be prepared to push past Putin’s predictable bluster, monologue of grievance, and distortions and outright lies.”

“In theory, a meeting between Presidents Trump and Putin could advance US interests if [Trump] were prepared to send a two-part message backed by policy commitment: that the United States is prepared to improve relations with Russia and develop a cooperative agenda in areas where our interests overlap and encourage its allies in this direction. But this is possible only if Russia is prepared to turn from its current belligerence, including its military aggression and threats against its neighbors, especially Ukraine, and against the United States and Europe using disinformation and other means of election interference,” he said.

“If not,” Fried added, “the United States and its NATO allies will counter Russia’s military moves and intensify economic pressure, including additional sanctions.”

“Putin needs to hear both resolve and the offer of better relations,” said Fried. “We seek as much cooperation with Russia as possible, not regime change, but Russia is the aggressive, not injured, party and needs to help make this possible.”

Fried added, however: “Again, Trump’s track record with Russia policy and with Putin does not leave much basis for optimism, but even a lesser message to Putin that he needs to back off his current pressure against Ukraine could be of use.”

A new crisis with Ukraine

On November 25, a Russian coast guard ship rammed a Ukrainian navy tugboat that was trying to enter the Sea of Azov—waters that are shared by Ukraine and Russia as agreed to in a 2003 treaty.

Russian forces also fired on Ukrainian naval vessels injuring six crewmembers and then captured the three vessels and two dozen crewmembers. The incident happened when two Ukrainian navy artillery boats and the tugboat were traveling from Odesa on the Black Sea to Mariupol in the Sea of Azov via the Kerch Strait, a narrow passage between the Crimean Peninsula and Russia.

This incident has put Trump on the spot.

Trump, who has accused his predecessor, Barack Obama, of allowing Russia’s annexation of Crimea in 2014, has had a lukewarm response to Russia’s latest aggression against Ukraine. In his first comments on the matter, he said: “We don’t like what’s happening.”

US Secretary of State Mike Pompeo, however, had a stronger statement in which he expressed “deep concern” over the incident and said “the United States condemns this aggressive Russian action.”

Both Fried and Åslund said Trump needs to take a stronger stand.

“Given Russia’s escalation in the Kerch Strait, any meeting that did not include a US warning that Russia should back off could signal acquiescence and trigger worse Russian behavior,” said Fried.

Åslund suggested the United States respond to this incident with more sanctions on Russia.

“President Putin should realize that the West will react to each violation of international law with more sanctions,” Åslund said. There are two targets of sanctions that are particularly relevant in this case, he said—Russian state financial institutions and Putin’s cronies.

Brian O’Toole, a nonresident senior fellow with the Atlantic Council’s Global Business and Economics Program, writing in a New Atlanticist blog post says sanctions should not be used indiscriminately. “Whatever route the United States and the EU choose… they should bear in mind the need to keep sanctions leverage focused on achieving more strategic and verifiable goals than are presented by this Russian attack on Ukrainian naval vessels in the Kerch Strait,” he wrote.

“Sanctions are a valuable resource when dealing with Russian aggression, but not every incident is a nail ripe for the sanctions hammer. Policymakers would be wise to consider other options to deal with this specific crisis and save the sanctions tool for broader objectives,” he added.

US National Security Advisor John Bolton told reporters earlier this week that the Trump-Putin meeting would cover security issues, arms control, and developments in the Middle East and Ukraine.

Åslund said the key point on the agenda should be that “President Putin has to understand that no improvement in the relationship between Russia and the Western world can occur until Russia starts acting in accordance with international law. This concerns Donbas, Syria, North Korea, cyber and election interference both in the United States and in other countries.”

Fried said: “The larger message of possible improvement in relations should start with the point better relations starts with Ukraine, where Russia seems to be instigating violence, not supporting a diplomatic settlement, the terms of which are already on the table.”

As a candidate, Trump promised a better relationship between the United States and Russia. Since coming to office, however, that goal has been hamstrung by Russian meddling in US elections and a special prosecutor’s ongoing investigation of alleged collusion between the Trump campaign and Russia.

Åslund said the US-Russia relationship has actually deteriorated on Trump’s watch. “An obvious reason is that President Trump carries no credibility with President Putin,” he said.

“While the US policy has been reasonably tough [on Russia]—we have a broad range of sanctions on Russia and arms deliveries to Ukraine—the credibility is missing given that President Trump has not supported the policies of his administration,” he said.

Putin is struggling with significant challenges, including a stagnant economy, on the domestic front. A meeting with the US president shifts the focus.

It plays well with Russians who continue to view their country as a superpower on the world stage, said Åslund.  And so, since “Putin’s meetings with Trump give him the opportunity to show how important Russia is in international affairs, it is more important for him to meet Trump than to actually accomplish anything in these meetings,” he added.