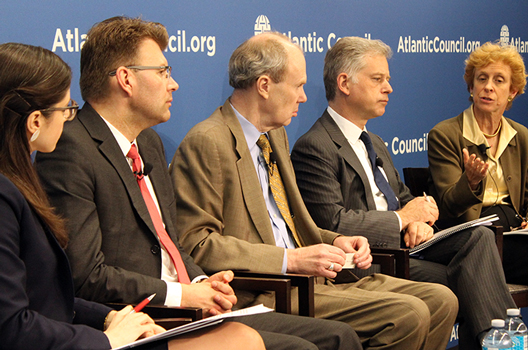 The United Kingdom’s decision to leave the European Union (EU) has strengthened solidarity among the bloc’s other twenty-seven member states, David O’Sullivan, the EU’s ambassador to the United States, said at the Atlantic Council on March 29.

“The debate around Brexit has strengthened support for the European Union elsewhere around Europe,” according to O’Sullivan. “If anything, it has joined the rest of us more closely together.”

On March 29, British Prime Minister Theresa May officially triggered Article 50 of the Lisbon Treaty beginning the process of taking the United Kingdom (UK) out of the EU.

O’Sullivan said that the prospects of Brexit, the UK’s departure from the EU, triggering a domino effect among other European nations is “most unlikely.” While populist forces in other countries with upcoming elections—such as France and Germany—seek to capitalize on the challenges facing the Union and introduce division, O’Sullivan asserted, “I remain remarkably optimistic about the future of Europe, the future of the European Union.”

“We should not be insensitive or complacent about the challenges we face, but we should also have the optimism and the confidence to believe that what has brought us to this point can take us forward into the future,” he said.

O’Sullivan delivered a keynote address at the Atlantic Council’s launch of its newest publication: Europe 2022: Alternative Futures, which examines a number of potential scenarios for the future of Europe. Following his remarks, Mathew Burrows, director of the Foresight, Strategy, and Risks Initiative at the Atlantic Council, joined Frances Burwell, a distinguished fellow with the Council’s Future Europe Initiative; Daniel Caspary, a member of the European Parliament; and Philippe Le Corre, a visiting fellow for foreign policy with the Center on United States and Europe at the Brookings Institution, to discuss converging social, political, and economic factors and consider potential scenarios for the future of Europe. Alina Polyakova, director of research for Europe and Eurasia at the Atlantic Council, moderated the conversation.

While there are a number of negative trends in Europe, exemplified not only by Brexit, but also migration issues, Russian antagonism, and economic uncertainty, these challenges are “testing the robustness of the European Union,” Damon Wilson, Atlantic Council executive vice president for programs and strategy, said in his introductory remarks.

Wilson said that despite the “unprecedented uncertainty on both sides of the Atlantic… the EU still appeals to many.”

According to O’Sullivan, Brexit has not triggered a fragmentation of Europe, but a great sense of urgency among countries seeking to solidify their position in the Union. “We are driven by a strong desire… to make Europe a force for good in the world,” he said.

However, the EU faces many challenges that cannot be ignored by its leaders. Europe 2022 outlines these threats to European unity. While the publication presents one optimistic view in which the EU achieves higher growth over the next five years, other scenarios include low growth, growing nationalism, increased Russian aggression, and a withdrawal of the United States from European affairs.

Europe is at a crossroads, said Burrows, one of the authors of the report. “Now, there are other visions,” he added. Burwell, also a co-author on Europe 2022, said that these different elements will all affect the future of Europe in their own way, but the greatest question is whether they lead to cohesion or fragmentation among the remaining twenty-seven member countries.

She noted that, as a general trend, external pressures lead to greater cohesion among the member states, while internal disputes lead to fragmentation. This can be seen when considering Brexit, which “is a constant in all of the scenarios,” she said. According to Burwell, other European countries are uniting in the wake of the UK backing away from the Union. On the Continent, “you’re seeing [the other EU countries] coming together.”

Caspary also noted a potentially positive side effect of the UK’s decision to leave the Union. “I prefer Britain to stay in the European Union,” he said, “but we are now losing the member state which blocked us very often, which kept us from integration… and which didn’t want to be on board in a lot of areas.” As a result, the British government hindered, blocked, and stopped many EU projects.

While Brexit is “a disaster,” said Caspary, he said it is also “a great chance for the European Union to develop quicker.”

“We can disintegrate the European Union… but most of the concerns people have can also be solved by a deep integration,” said Caspary. “Perhaps more integration could deliver better answers to some of those problems.” He said he sees a US role in facilitating this process.

Burwell noted the general support among remaining member states for the European project, but it has manifested itself in new ways. “Different countries will be more keen on preserving elements of the Union,” she said. Burwell described how, even in the most pessimistic scenario for Europe presented in the report, she did not see the breakup of the Eurozone, but rather a smaller group of member states which will continue the Union. “All in all, it’s a very good success story,” said Caspary.

He described how “the younger Europeans are, the more they are in favor of Europe.”

Outlying populist political figures, such as Marine Le Pen of France’s National Front, could threaten the balance. “The vast majority of French people do want to stay in the EU,” said Le Corre. “Having said that,” he added, “they do have second thoughts.”

If Le Pen is elected, said Le Corre, “she will start the process of leaving the Euro.” However, according to Caspary, should this happen, the EU will survive.

Burwell said it is unlikely that Le Pen will win the election. “The greatest challenge for Europe is what happens here,” in the United States, she said, describing the uncertainty surrounding Washington’s role in Europe.

Though US President Donald J. Trump has met with European leaders and plans to attend the NATO summit on May 25, the new administration has also expressed a preference for bilateral relations with member countries, and taken an aggressive stance by insisting NATO members meet their commitment to spend 2 percent of gross domestic product (GDP) on defense. US Defense Secretary James Mattis has suggested that the United States will moderate its commitment to allies who cannot meet this benchmark.

According to Burwell, “the question for Europe is: can it step up to the plate?”

Image: (from left) Alina Polyakova, director of research for Europe and Eurasia at the Atlantic Council, moderated a conversation with Daniel Caspary, a member of the European Parliament; Mathew Burrows, director of the Foresight, Strategy, and Risks Initiative at the Atlantic Council; Philippe Le Corre, a visiting fellow for foreign policy with the Center on United States and Europe at the Brookings Institution; Frances Burwell, a distinguished fellow with the Council’s Future Europe Initiative. (Atlantic Council)