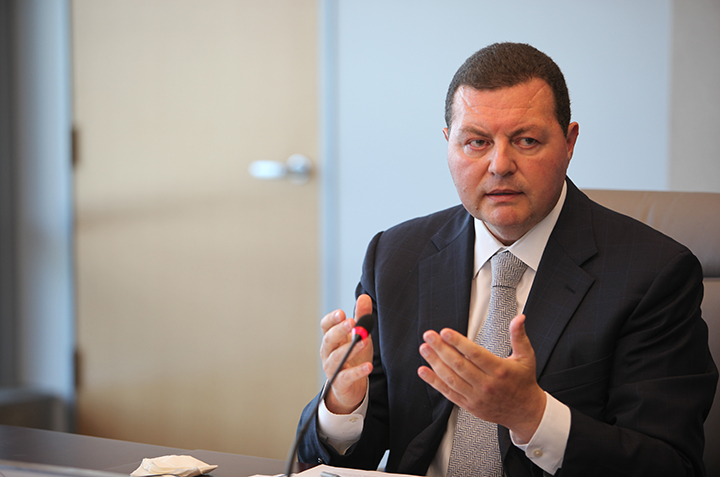 Initial estimates that the Islamic State of Iraq and al-Sham (ISIS) had around 6,000 fighters in the Libyan city of Sirte now appear to be vastly exaggerated, said Karim Mezran, a senior fellow in the Atlantic Council’s Rafik Hariri Center for the Middle East. (Atlantic Council/Victoria Langton)

The battle to drive the Islamic State of Iraq and al-Sham out of the Libyan city of Sirte may have the unintended consequence of putting in proximity forces loyal to the UN-backed unity government in the west and a rival general in the east. A clash between these factions would certainly destabilize Libya, but it could also split the North African nation in half, said the Atlantic Council’s Karim Mezran.

Troops loyal to the Government of National Accord (GNA)—mostly militias from the western city of Misrata—this week succeeded in shrinking ISIS’ control over its stronghold in Sirte. Forces loyal to Khalifa Haftar, a controversial general who does not recognize the authority of the Tripoli-based unity government, did not join the battle against ISIS.

“The fact that the Misrati and other militias are attacking Sirte might lead, once Sirte is liberated, to a clash and confrontation with the troops of Haftar thus undermining the stability that the GNA is trying to find,” Mezran, a senior fellow in the Atlantic Council’s Rafik Hariri Center for the Middle East, said in a discussion with reporters.

The rival forces have until now sought to avoid a confrontation, but in the absence of a buffer may clash, which could lead to the “de facto separation of the country, which is a thing that everybody, at least in theory, formally wants to avoid,” he added.

Mezran said initial estimates that ISIS had around 6,000 fighters in Sirte now appear to be vastly exaggerated. Regardless of the size of the ISIS presence, the unity government will be boosted by the military gains, the challenge that lies ahead, however, is to guarantee control over Sirte to prevent it from once again becoming a terrorist sanctuary, said Mezran. The scale of any international military intervention in Libya would greatly depend on the success of this effort.

“Some of the militias [fighting ISIS] have Islamist leanings and may be pro-al Qaeda,” said Mezran. “So it could be said, ‘You are kicking out ISIS, but you are giving Sirte to another kind of jihadi organization.’”

In May, the United States and twenty other nations decided at a meeting in Vienna, Austria, to assist the unity government’s fight against ISIS by providing weapons and training to a presidential guard.

Libya is under a UN arms embargo, which has repeatedly been violated as Libya’s neighbors have picked sides since the country’s longtime leader, Moammar Gadhafi, was ousted and killed in an uprising in 2011.

Libya spiraled into chaos following Gadhafi’s death. The country has been ruled by two rival governments, heavily armed militias jockey for control, and a human trafficking network that funnels migrants to Europe has flourished.

Earlier this year, a unity government, led by Prime Minister Fayez Serraj, was installed following protracted negotiations between rival power centers in Tripoli and Tobruk. Serraj was forced to sail into Tripoli in March defying warnings from the opposition, which had shut down the airport to prevent him from arriving. Three months later, Serraj’s government has yet to win a vote of approval in the Tobruk-based House of Representatives.

Given this fluid political and security situation questions have been raised about the wisdom of partially lifting the arms embargo for a country that is already awash with weapons.

“It is a big risk…people say you will end up arming your own enemy,” said Mezran, “but it is a risk that has to be run otherwise you will end up running in circles.” He contends that arms should be provided to units that could become the core of a new Libyan army.

Egypt is a vital player in Libya. US Secretary of State John Kerry, in a meeting with Egyptian President Abdel Fattah al-Sisi in Cairo in May, sought to ensure that Egypt links its support for Haftar to his acceptance of the unity government’s authority.

There is a real danger of an arms race in Libya as a result of the international community’s support for the Misratis on one side and support from Egypt and the United Arab Emirates for Haftar on the other. Such a scenario must be avoided at all costs because it would lead to the breakup of Libya, said Mezran.

“The future of Libya is as much in the hands of Libyans as it is in the international community’s capacity to reign in actors like Egypt and the Emirates,” said Mezran. So, he added, an agreement between the rival factions is crucial.

Frederic C. Hof, director of the Atlantic Council’s Rafik Hariri Center for the Middle East, moderated the discussion with Mezran. Hof, who formerly served in the Obama administration as the special adviser for transition in Syria, recalled that at the time of the uprising against Gadhafi in 2011 there was “a lot of handwringing by senior White House officials about the role of the Qataris” in Libya.

“Over time, there have been a lot of chefs in the kitchen—the Qataris, the Emiratis, the Egyptians, and God knows who else,” said Hof.

“Over time, there have been a lot of chefs in the kitchen [in Libya]—the Qataris, the Emiratis, the Egyptians, and God knows who else,” said Frederic C. Hof, director of the Atlantic Council’s Rafik Hariri Center for the Middle East. (Atlantic Council/Victoria Langton)

While Qatar has been “reigned in,” Western governments could be reluctant to strain their ties with their Arab allies over Libya, said Mezran. “Are the Americans going to scream and yell at the Egyptians because of their support for Haftar? I don’t think so,” he added.

Mezran suggested that the international community could work with Aguila Saleh, the president of the House of Representatives, to win the legislature’s support for the unity government. But, he also predicted that Saleh would be reluctant to recognize a unity government that is dependent on militias opposed to Haftar’s forces.

Another way the international community can assist the fledgling Libyan government is by helping it manage its budget because the oil-dependent nation hasn’t been able to export oil due to the prevailing chaos, said Mezran.

On the question of oil, Mezran said that Donald Trump, the Republican Party’s presumptive presidential nominee, was peddling “another fantasy” by claiming that ISIS is making a fortune by selling Libyan oil. “Libya is not Iraq. It is geographically much more difficult to smuggle the oil,” Mezran said.