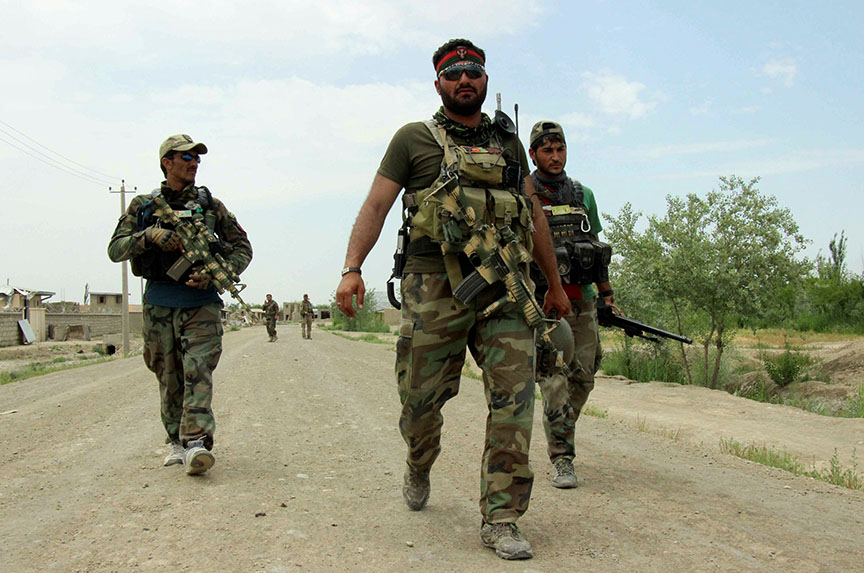 Amid ongoing, deadly attacks in the Afghan capital and elsewhere, the Taliban has reached out to the United States to begin peace talks aimed at ending more than seventeen years of conflict between US-led forces and the once-ruling extremist group.

At least, that’s what the group’s open letter in February reads. In it, the Taliban states it is imploring the American people and members of Congress to convince the Trump administration of the necessity for the talks.

Afghan President Ashraf Ghani on February 28 extended his own olive branch by offering to recognize the Taliban as a legitimate political group as part of a proposed peace process. He said he was making the offer “without preconditions.”

The Taliban’s offer comes at a seemingly odd time for the group considering that it has retaken much of the territory it lost following the 2001 US-led invasion that forced it from power.

Currently, the Taliban has a strong hold over large parts of southern Afghanistan, including its birthplace, Kandahar Province. The extremist fighters have also regained significant territory in neighboring Helmand Province where US Marines have waged a deadly battle against the Taliban for several years.

Today, the Taliban controls much of rural Afghanistan, both in terms of territory and the hearts and minds of many who have grown weary of constant fighting and never took to a Kabul-centric government closely allied with Washington that they feel has done little or nothing to improve their lives.

For some, the Taliban, though hardline and merciless, did provide much-wanted stability following the exodus of Soviet forces in 1989.

The withdrawal of Russian troops followed years of civil war between factions of mujahideen fighters, some allied to the United States, which largely turned its attention away from Afghanistan once the last Soviet tank rolled out of the country.

Out of that melee emerged the Taliban, a group of Islamic fundamentalist students (talib means student in Arabic), many of whom were educated in hardline religious schools (madrassas) in Pakistan and were provided weapons and training from that country’s Inter-Services Intelligence (ISI) agency.

Among the most prominent of the Taliban’s founders was its infamous leader Mullah Omar. Born in southern Afghanistan, he made his reputation fighting the Soviets, losing his right eye along the way.

When the mujahideen factions began their infighting, Omar and a group of his loyal commanders formed the Taliban. They consolidated power by defeating the other groups and eventually taking the Afghan capital, Kabul, in 1996.

The Taliban ruled Afghanistan with impunity for five years with Omar as the supreme leader. Under his rule, the harshest interpretation of Shariah law was strictly enforced. Music was banned and men were forced to grow out their beards, while women were stripped of nearly all their rights. Those that defied the Taliban doctrine were often executed publicly in stadiums once used for sport events.

The Taliban also gave shelter to al Qaeda leader Osama bin Laden after he was forced to leave Sudan in 1996. In the years leading up to the September 11, 2001, terror attacks on the United States, al Qaeda used Afghanistan as a safe haven for recruiting and training fighters.

After the initial US-led invasion in 2001, the Taliban was largely defeated and went to ground in its traditional strongholds in eastern Afghanistan like Nangarhar, Kunar, and Nuristan provinces. In southern Afghanistan, they have rallied their forces and resources in Kandahar, Helmand, and other provinces where their support among civilians remained strong.

As the Taliban is fond of saying: “The Americans have the watches, but we have the time.” The extremist fighters managed to wait out the US-led coalition so when George W. Bush administration decided to invade Iraq, taking much of its focus off of Afghanistan, the Taliban made its move.

By 2008, the Taliban had regained more than half of the territory it lost following the 2001 invasion, prompting newly-elected US President Barack Obama to order a troop surge in 2009 that added tens of thousands of additional US forces to the battlefield.

For five years US troop levels hovered around 100,000 strong in Afghanistan before the Obama administration ordered a significant drawdown to some 10,000 troops. The White House was widely criticized for telegraphing the drawdown, thus giving the Taliban incentive to wait out their departure before ramping up their offensive against Afghan security forces and attacks on civilian and diplomatic targets in Kabul and other major cities.

The Taliban began retaking large swathes of the country, village by village, until it managed to coalesce its gains into a majority of the country’s territory. It set up shadow governments that oftentimes usurped all authority at local levels from those leaders that had the backing of Kabul.

The Taliban continues to operate in much of rural Afghanistan under the same system. With US forces drawn down to about 14,000 troops, most of them concentrated on larger bases, the Taliban fight is mostly between it and Afghan forces and occasionally those that splintered from the Taliban into an Islamic State faction in eastern Afghanistan. The Islamic State in Afghanistan has made Nangarhar Province its base of operations, an area once occupied by the Taliban and al Qaeda forces loyal to Bin Laden.

Mullah Mohammad Rasoul leads the Renouncers. Rasoul left the main Taliban faction in anger over the way the death of Omar, who passed in 2013, was concealed until 2015 by Omar’s replacement Mullah Akhtar Muhammad Mansour.

Mansour was killed in a US airstrike in 2016. Following his death, the Taliban dealt with some infighting and confusion regarding its leadership, as well as challenges from the Islamic State in Afghanistan for fighters and resources.

Not all of the Taliban’s factions do battle in Afghanistan. The Pakistani Taliban, also known as the Tehrik-i-Taliban (TTP) Pakistan, has ties to its Afghan counterparts, though it has focused much of its efforts on the Pakistani side of the border with the occasional incursion into Afghanistan.

The Afghan Taliban, meanwhile, does take advantage of that largely porous and unprotected border and its relationship with the ISI.

Pakistan’s ISI is seemingly intent on keeping Afghanistan in a perpetual state of war and uncertainty in an effort to counter arch rival India’s efforts to play a larger role in Afghanistan. For decades, the ISI has provided weapons and other support to the Afghan Taliban and other extremist groups in Afghanistan such as the Haqqani Network led by Sirajuddin Haqqani after the death of his father, Jalaluddin, in 2014. Haqqani was appointed deputy leader of the Taliban in 2015 in a move that cemented ties between the Taliban and the Haqqani Network. Hibatullah Akhundzada leads this main faction of the Taliban.

Against this continued fighting, myriad alliances and rivalries, plus the uncertainty it produces, the Taliban offer for peace talks is even more confusing.

Previous attempts at peace talks have come up short. In 2010, the Afghan government reportedly held secret talks with Mullah Abdul Ghani Baradar, a senior Taliban leader. After Baradar was arrested by Pakistani authorities in the city of Karachi the Afghan government denied that it had been talking with him.

Negotiations set in Doha in 2016 between Taliban leaders and the Afghan government fizzled soon thereafter. Among the points of contention were the flying of the Taliban flag and display of other emblems at the extremist group’s Doha office. The Afghan government said this undermined its diplomatic authority on the world stage.

More recently, the Chinese government has thrown its hat into the Afghan peace talks ring joining peace talks that took place in February that also drew to the table delegations from Afghanistan, Pakistan, and the United States.

Given the scant success of past efforts to end the war in Afghanistan, it is anyone’s guess where these latest offers of peace will lead.

Carmen Gentile is a freelance journalist and author of the book “Blindsided by the Taliban.” Follow him on Twitter @CarmenGentile.

Image: Afghan commandos are seen in Qala-i-Zal, a district in Afghanistan's northern Kunduz Province, on May 16, 2017. (Reuters/Nasir Wakif)