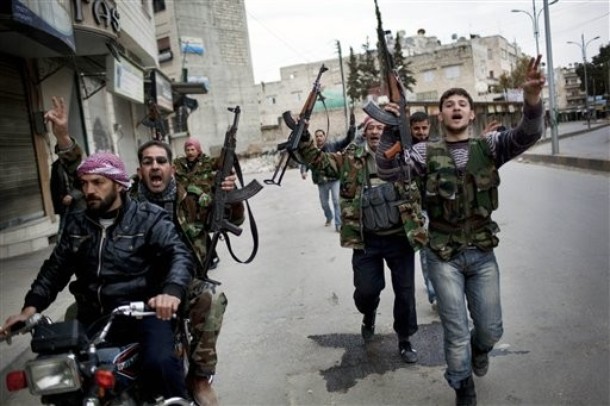 Some knowledgeable military observers who have served or are serving in the Middle East say that the Arab Spring, which translated into chaos and intertribal warfare from Yemen to Libya to Syria, is a prelude to a much wider conflict involving Israel and Iran.

Saudi Arabia is assisting the Syrian rebels who now call themselves revolutionaries. Some “Gulfies,” the colloquial label for Arab oil states in the Persian Gulf, assisted the anti-Gadhafi NATO forces in Libya last year, and Libya today is the chaotic domain of dozens of rival tribes once suppressed by the late eccentric and bloody dictator.

In Tripoli, the Libyan capital, Aldelkadir Elhaj, a former al-Qaida chief, once tortured by the Thais under the U.S. rendition program, holds sway with a big stick.

Privately, Persian Gulf leaders say Iran has concluded the United States’ days as a superpower are numbered. Iran’s aging theocrats tell their visiting gulf interlocutors that America has lost two wars in 10 years — Iraq and Afghanistan — and is pulling out of Europe and “pivoting” to Asia where China is already dominant.

Also on a wider front, Islamist fundamentalists hijacked the Arab Revolution in Egypt and would like to loosen the constraints imposed by the Camp David accords and the peace treaty with Israel.

The fundamentalist drama is still being played out in Egypt, Syria and Libya.

Denials notwithstanding, Persian Gulf rulers are secretly rooting for Israel against Iran. Privately, some have told trusted foreign friends that if the United States and Israel cannot rein in Iran’s Revolutionary Guards, they will have no alternative but to accommodate Tehran.

The Spanish civil war (1936-39) killed 500,000 as Nazi Germany and the Soviet Union backed opposite sides — and Franco’s fascists emerged victorious and remained in power until 1975.

In the Middle East, Syria’s civil war — which some observers are calling Spain II, or a prelude to World War III — has been under way since Feb. 17, 2011. Saudi Arabia is helping arm Syrian rebels who now call themselves revolutionaries. Russia and China are backing the Syrian dictatorship, which is allied with Iran.

Russia, China and Iran are on the side of Syria’s “Alouite dictatorship” headed by Bashar Assad. He inherited the country’s dictatorship from his father Hafez who died in 2000 after almost 30 years in power.

Between the end of the French mandate in 1945 and the military takeover of air force chief Gen. Hafez Assad in 1970, Syria experienced 21 coups. So no one is taking any bets on Assad’s political longevity.

Unless Iran’s current view of a rapidly declining U.S. superpower can be reversed, a number of Arab Gulf rulers will be tempted into longer lasting accommodation with Tehran.

Iran’s revolutionary guards control the entire eastern side of the Persian Gulf from the Iraqi border to the Hormuz Strait, the Gulf of Oman and the Arabian Sea. All the Arab gulf states and their oil installations are in the sights of Iran’s missile sites.

Some Iran-watchers consider Tehran’s current narrative highly dangerous. Iran’s leaders see themselves as still standing and in fighting trim after all manner of Western sanctions. They have apparently concluded among themselves and tell their Arab visitors that after the United States exits the gulf, they will still be there, the major force to be reckoned with, astride one-fifth of the world’s oil supplies.

Tehran’s view of its all-dominant strategic posturing is reinforced by what it sees as two anti-American powers on its right flank — Afghanistan and Pakistan. It was Pakistan’s Dr. A.Q. Khan, the world’s leading nuclear black marketer, who sold Iran the wherewithal to start its journey toward becoming a nuclear power.

Today, Pakistan, in a paroxysm of anti-Americanism, brought about by last November’s accidental killing of 24 Pakistani soldiers by a U.S. gunship over the Afghan border, have stalled thousands of supply trucks for NATO forces in Afghanistan. The successful SEAL raid that killed Osama bin Laden also rankled national sensitivities.

And Tehran’s Revolutionary Guard generals also see Afghanistan moving away from its close alliance with the United States — and vice versa. The idiotic mistake of U.S. personnel torching unwanted Korans was manna from heaven for Iran’s mullahs.

In his meeting Monday with Israeli Prime Minister Binyamin Netanyahu, U.S. President Barack Obama, weighing the pros and cons of his chances for another four years in the White House, knows that major differences with the Jewish state on its existential crisis would probably cost him the election.

A congressional thunder clap from pro-Israel lobby group the American Israel Public Affairs Committee is the last thing Obama needs eight months before the election. Israel’s prime minister reminded him that the plan to assassinate the Saudi ambassador to the United States in Cafe Milano, Washington’s celebrity-studded “in” restaurant, was the real thing, the FBI said.

On the other hand, the current correlation of forces in the Middle East doesn’t favor the United States and its Western allies. The United States clearly has the assets — bombers, drones, deep penetration ordnance and SEALs — to deprive Iran of nuclear weapons for several years. But Iran also commands sufficient terrorist assets to unleash massive, asymmetrical retaliatory blows, including thousands of mines in the Strait of Hormuz — i.e., 20 percent of the world’s oil.

Netanyahu says “None of us can afford to wait much longer” and “I will never let my people live in the shadow of annihilation.” If diplomacy fails and Obama decides to keep the United States out of what would be its third armed conflict in 10 years, he could easily be toast in November. And if he goes in, the result may be much the same.