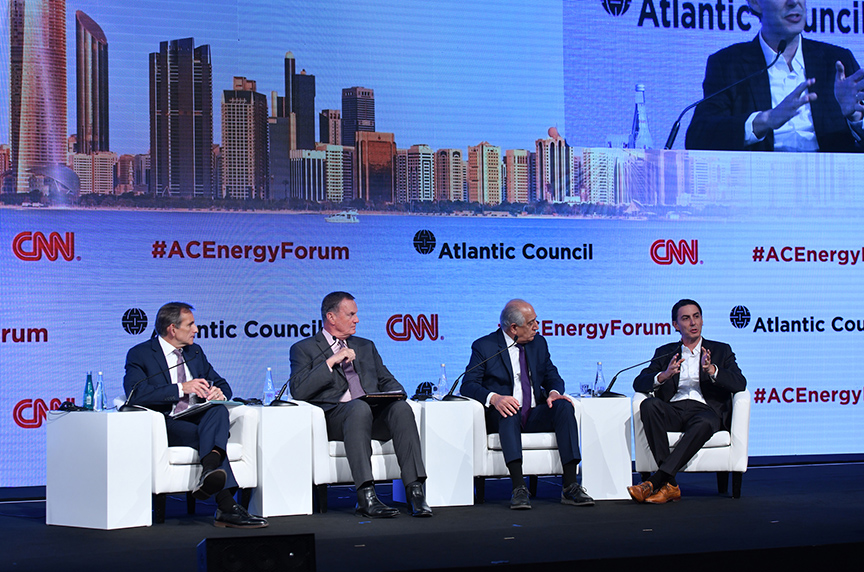 The uncertainty caused by US President Donald J. Trump’s criticism of the Iran nuclear deal has contributed to a stagnation of Iran’s economy—the underlying cause of the ongoing anti-government protests in the Islamic Republic, according to a former Obama administration official.

On January 12, Trump agreed to one last time waive sanctions on Iran, but gave the US Congress and European allies 120 days to fix the nuclear deal or else the United States would unilaterally pull out.

“We do have to keep the pressure up,” said Amos Hochstein, senior vice president for marketing at Tellurian Inc. “I think we can keep the deal and not threaten to leave it unilaterally, work with allies to improve whatever we can, while upgrading pressure on Iran,” he said.

However, he added, the political climate, looming risk of snapback sanctions, and state of the global energy markets “are affecting the ability of the Iranian public to rejuvenate their economy.”

The lagging economy, the effects of which are felt most by the poorer sections of Iranian society, is the catalyst behind the protests, which erupted late in December of 2017.

The current state of the world energy markets, dogged by low oil prices, have led companies to seek capital investment in other sectors, such as renewable energy. However, according to Hochstein, who served as the special envoy and coordinator for international energy affairs and led the Bureau of Energy Resources (ENR) at the US Department of State in the Obama administration, should they pursue an investment in oil or gas, “companies are not going to invest in a country that poses a risk because of the uncertainty the United States has created.”

Hochstein joined Zalmay Khalilzad, president of Khalilzad Associates and former US ambassador to Iraq; Carlos Pascual, senior vice president of IHS Global Energy at IHS Markit; and retired Gen. James L. Jones, Jr., interim chairman at the Atlantic Council, at the Atlantic Council’s Global Energy Forum in Abu Dhabi on January 12. The panel, moderated by Meghan O’Sullivan, director of the Geopolitics of Energy Project at Harvard University, focused on the impact of domestic developments in Iran on energy markets.

According to Pascual, who preceded Hochstein as US special envoy and coordinator for international energy affairs, the protests in Iran have more to do with the actions of the regime than the global markets. “Not very much of this can be blamed on low energy prices,” he said.

In 2017, Iran increased its profits by seven to ten billion dollars as a result of increased exports and slowly climbing oil prices. Instead, Pascual said, the lack of transparency in Tehran has contributed to dissatisfaction. According to Pascual, the domestic strife has been exacerbated by the threat of snapback sanctions from Washington and the uncertainty over the future of the nuclear deal. “It’s those questions which are fundamentally affecting the desire of companies to go forward,” he said.

As a result, Iranians have not seen the changes—caused by a promised increase in foreign investment—they expected in the wake of the nuclear deal.  “On the whole, the population has been disappointed,” said Khalilzad.

However, while the Trump administration’s approach has created uncertainty around the future of the deal with ramifications for the Iranian people, Khalilzad said there is some merit to this approach. “This administration is signaling that this agreement is more in the interest of Iran than us and giving us some room to push back,” he said.

According to Hochstein, negotiation of the deal is necessary, but the agreement cannot be thrown out entirely. “The consequences of ending the deal by ending waivers and doing it unilaterally are catastrophic,” he cautioned, emphasizing the importance of European support for the deal. “The flipside,” said Hochstein, “doesn’t mean that we have to keep it as is.”

Jones advocated a stronger stance. “The international community really has to come to grips with this, the policy of appeasement, vocal appeasement [of Iran]…is worrisome,” he said. Due to Iran’s regional aggression, backing of non-state actors, and dubious human rights record, Jones said: “I refuse to recognize that Iran is a contributing member of the family of nations. I don’t think they’re deserving of that kind of status.” Instead, he referred to the Islamic Republic as an “existential threat.”

While he said the nuclear deal has helped to keep Iran’s nuclear program at bay, “the overall behavior of Iran should not be judged by whether or not they are keeping up with the nuclear agreement,” said Jones.

He said the Trump administration has been right to double down on its ties with other partners in the region, such as Saudi Arabia. Further, Jones called for the countries of the Gulf Cooperation Council (GCC) to form a NATO-like security organization among themselves in order to hedge against Iran.

While external pressure may push Iranian hardliners and reformers together in order to achieve reform, said Khalilzad, it could also fracture the establishment. He described how such an outcome could lead to further instability and social upheaval.

“Historically, during big changes in Iran, the oil sector has played an important role, particularly the workers,” said Khalilzad. If the oil workers, the demographic largely involved in the protests, are unhappy, it could further affect energy production and Iran’s role as an energy player in the region, according to Khalilzad. “Even the instability itself has affected the price,” he said.