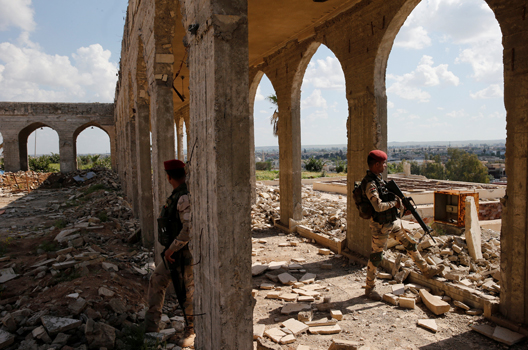 As 2017 closes, so does the physical “caliphate” of a pseudo-religious criminal enterprise known by the names ISIS, ISIL, Daesh, and Islamic State. But killing the caliphate is only step one. Keeping it dead will be a generational struggle.

Rooted in al-Qaeda in Iraq (AQI) and supplemented by pro-Saddam Hussein Iraqi Baathists, ISIS seized the Syrian city of Raqqa from Syrian rebels in 2013 and, from there, invaded Iraq in 2014. For over three years an American-led military coalition has sought to degrade and destroy a ruthless collection of murderers, rapists, thieves, and terrorists; a band of criminals drawn from the dregs of the Sunni Arab world seeking to mask crude depredations by purporting to act in the name of Islam.

The Islamic State of Iraq and al-Sham (ISIS) and other brands of murderous extremism are the results of political illegitimacy. Legitimacy exists when there is societal consensus that a political system is right and just: consensus reflecting the consent of the governed. Legitimate systems can survive incompetent presidents, prime ministers, and kings. Illegitimacy reflects consensus that the system is rotten and merits destruction. Unless sustained by violent coercion, an illegitimate political system can open a governance vacuum. ISIS is a vacuum-filler.

When Bashar al-Assad’s regime in Syria responded to peaceful protests with lethal force, it created multiple political vacuums and opened Syria to penetration by al-Qaeda. In Syria, the most spectacularly evil of the vacuum-fillers—ISIS—entered from Iraq and imposed itself. In Iraq, the sectarian-tinged illegitimacy of Prime Minister Nouri al-Maliki enabled ISIS to form alliances with disaffected Iraqi Arab Sunnis.

It is one thing to kill ISIS militarily. Keeping it dead, however, requires legitimate governance. For both Syria and Iraq, the near-term prospects for neutralizing extremism through systemic political legitimacy range from nonexistent in the former, to difficult in the latter.

For the United States and its allies, this is not a matter of abstract political science. From a safe haven in Raqqa the ersatz caliphate planned and executed multiple deadly atrocities in Western Europe and Turkey. If vacuums of political illegitimacy are not sealed properly, Syria and Iraq will continue to host parasites capable of doing great damage internationally.

In Syria, the challenge is striking: a murderously corrupt and incompetent ruling family and its entourage have combined mass civilian homicide with Iranian and Russian military intervention to prevail over a disjointed armed opposition. Leaders in Moscow and Tehran know the cause-and-effect of the Assad regime’s illegitimacy and the rise of the ISIS caliphate. But they have, for distinct but compatible reasons, prioritized saving that regime.

For Russian President Vladimir Putin, telling his constituents that Russia has saved Assad from an US-led regime-change plot and that Russia is, therefore, back as a great power is a talking point of incalculable value in a nationalistic country otherwise suffering from economic mismanagement and bottomless corruption.

For Iranian Supreme Leader Ali Khamenei, Assad alone is willing and able to place his country at the disposal of Iran’s most valuable regional player: Hezbollah. With its expeditionary military forces, money laundering, drug running, and strategic assassinations, Hezbollah is the point of the spear Iran aims at the Arab Levant and Israel.

Putin and Khamenei have, until very recently, treated ISIS in Syria as an afterthought, focusing their firepower on anti-Assad rebels and supporting a live-and-let-live relationship between their client and the caliphate. Now that the regime’s opposition is largely neutralized, they seek to extend their client’s rule to all of Syria, including areas liberated by the United States and its Kurdish-led allies from ISIS. They may succeed. Yet the Assad regime will remain the antithesis of political legitimacy, and will find it difficult to restore internal terror as a stabilizing mechanism. Islamist extremists will welcome Assad’s extended tenure.

In Iraq, the United States has had a recognized government and an official army with which to work in trying to defeat ISIS. Still, Iraqi Prime Minister Haider al-Abadi and those who will succeed him in the coming years will find it difficult to secure broad societal consent to a political system binding all Iraqis to a common purpose. To gain traction in the quest for legitimacy, a system must be seen by its constituents as the best possible political tool for stability, economic advancement, and dignity. Sectarianism, corruption, Kurdish separatism, and an Iranian presence seeking to keep Iraq weak and divided are among the many obstacles to Iraqi legitimacy.

As 2018 opens, it is not clear that the United States has arrived at a strategy that, in Syria, would promote political transition away from an illegitimate, extremist-abetting regime and, in Iraq, implement long-term US commitments to help with security, reform, and economic progress consistent with the US-Iraq Security Framework Agreement signed in November 2008. The trans-border ISIS caliphate is dying. Keeping it and its imitators dead requires legitimacy. For both Syria and Iraq, attaining political legitimacy will require generational efforts and sustained external assistance.

Image: Memebers of the Iraqi security forces stand guard as Ameen Miqdad, a violinist from Mosul who lived under ISIS's rule for two and a half years where they destroyed his musical instruments, performs at Nabi Yunus shrine in eastern Mosul, Iraq, April 19, 2017. (REUTERS/ Muhammad Hamed)