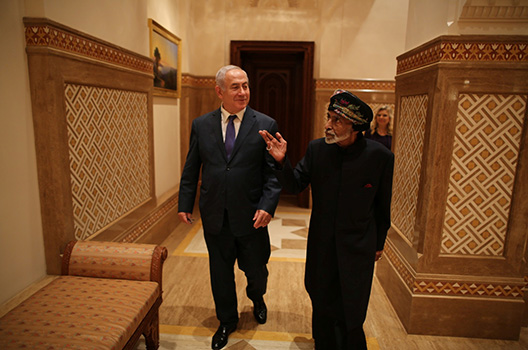 On October 25, Omani Sultan Qaboos bin Said al Said hosted a delegation of Israeli officials that included Prime Minister Benjamin Netanyahu and Mossad chief Yossi Cohen for an unannounced meeting in Muscat. The meeting turned heads as Gulf leaders rarely meet Israeli officials. It was a sign of not only improving Israeli-Omani relations, but also Israel’s quest to develop diplomatic relations across the Persian Gulf.

Oman has long had a reputation for being a critical interlocutor in the Gulf. Muscat’s close relations with Iran helped the United States establish back channels to negotiate the Joint Comprehensive Plan of Action (JCPOA), the Iran nuclear deal, with Tehran in 2013.

Oman also has a reputation of being a regional wildcard. It was one of only two Gulf Cooperation Council (GCC) country (Kuwait the other) not to cut off trade ties with Qatar last year following the imposition of the Saudi-led blockade and diplomatic isolation of Qatar. Earlier this year, Oman reportedly hosted a series of secret Saudi-Houthi talks in an effort to end the conflict in neighboring Yemen.

With Omani Foreign Minister Yusuf bin Alawi bin Abdullah’s declaration that “Israel is a state present in the region, and we all understand this,” the sultanate is once again taking unique steps for a Gulf nation.

Analysts portrayed the October 25 meeting as an Israeli attempt to create either a back channel to Iran or to lure a potential ally away from Tehran at a time when the United States has reimposed sanctions on Iran.

Netanyahu said the meeting was intended to lay the groundwork for future Israeli-Palestinian peace talks. The Omanis responded that they support US peace efforts and cannot serve as official mediators.

Israel also has its eyes on the wider region. The murder of Saudi journalist Jamal Khashoggi in the Saudi Consulate in Istanbul on October 2 has threatened to weaken US-Saudi relations. This would be a challenge to Israel which enjoys security and defense back channels to Riyadh despite no official Saudi recognition of Israel. But the potential clipping of Riyadh’s wings could also allow Israel to exploit a regional leadership vacuum.

What does Israel stand to gain?

The meeting between Qaboos and Netanyahu sends a message to Iran. It was a signal, strategically timed with an Israeli delegation’s visit to Abu Dhabi, that Israel is now publicly entering the Gulf theater (though covertly it has long been at play in the region), with one of its best soft power assets: public diplomacy.

Oman is the closest actor to Iran that Israel can diplomatically access. Kuwait, the only other GCC country with close relations to Iran, has a continued boycott of Israel. Despite Oman’s fifty-year-long history with Iran and its hosting of US-Iranian talks on a nuclear deal that Israeli officials claimed ended up unfavorable to Israel, Oman’s international brand as the “Switzerland of the Gulf” makes it an attractive conduit between Israel and Iran.

On a strategic level, mere kilometers separate Oman from Iran, thanks to Oman’s Musandam Peninsula exclave, and Oman is the only other country besides Iran to border the narrow Strait of Hormuz. Owing to the Musandam Governorate’s proximity to Bandar Abbas, the location of Iran’s main naval base, Oman can play a significant role in a variety of scenarios deterring Iran’s naval capabilities should it threaten regional stability, in effect serving as the neutral gatekeeper of the Persian Gulf. Should Oman choose to, the sultanate can warn Israel of increased Iranian buildup, alert the international community to an Iranian naval blockade, and ensure the maintenance of Gulf shipping channels.

All in all, Israel has plenty to gain from improved Gulf relations. The image of Israel and Oman bridging their differences might send a message that Israel has not given up on the prospects for peace in the Middle East. Israel’s actions toward Oman will not change the attitudes of Israel’s rivals but may force them to recalculate should Israeli-Omani relations warm up.

Why would Sultan Qaboos meet with Netanyahu?

Less obvious, perhaps due to Oman’s relatively isolationist behavior, is why Oman would not only publicly announce the formal visit of Netanyahu and other Israeli officials, but also declare the legitimacy of Israel as a “state” in the Middle East. Oman must effectively maintain cozy relations with its neighbors to maintain its go-between status. Conducting diplomacy with a declared enemy of both Iran and the Houthis threatens Oman’s potential mediation in Yemen.

Some have cited Qaboos’ cancer diagnosis and the need to avoid a reemergence of insurgency upon succession after the sultan’s half-century rule as plausible reasons for his decision to host Netanyahu. More likely, Oman is attempting to assert its independence from its neighbors.

Like the United Arab Emirates and the other members of the GCC, Oman is caught between the aftermath of the Khashoggi murder and a freshly sanctioned Iran. Both Saudi Arabia and Iran (as well as its proxies) have used Oman as host of a number of secret talks. There is a strong likelihood that both the Saudis and Iranians will want Oman to restart the Saudi-Houthi talks and that the GCC will want Oman to be the intermediary when the Saudi-Qatari rift subsides.

According to a recent Stratfor report, Saudi Arabia can leverage Oman in a few ways: Riyadh has established an investment fund for Oman, invested $210 million in Oman’s Duqm port project, and has the capability to influence the sultanate’s succession process. But the Iranians also have influence over Muscat: the two have conducted joint military exercises in the Strait of Hormuz and have signed multiple bilateral trade and energy agreements.

Qaboos may want to show Tehran and Riyadh that he is not beholden to them. By taking a unique position on Israel, which only two other Arab and no Gulf nations have taken, Oman is declaring itself an independent sovereign state not to be overlooked.

With uncertainty among key regional powers, it is the ideal time to bring forward new strategic formulations like the construction of Israeli-Omani relations to create new paths toward regional stability. Regional actors are sure to react—Iran and Hamas have already deemed the Israeli-Omani talks unacceptable, while the Palestinian Authority called for the acceptance of the Arab Peace Initiative before Arab-Israeli talks take place.

The Omanis have not been deterred. Speaking on Al Jazeera, the Omani foreign minister responded to those criticizing Qaboos’ meeting with the Israeli delegation by asking “Are we not allowed to do so?”

Muscat’s resolve will be critical to the development of warmer Israeli-Gulf relations and for shaping any resolutions to some of the region’s protracted conflicts.

Daniel Kamlarz is an intern at the Middle East Security Initiative at the Atlantic Council. Follow him on Twitter @DanielKamlarz.