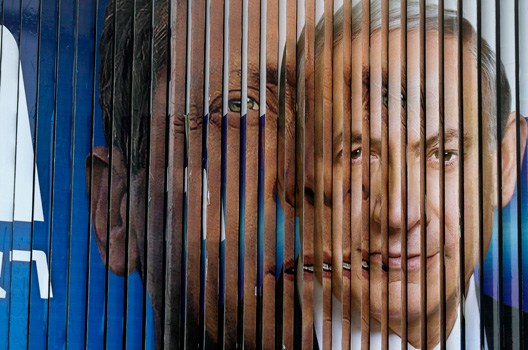 Israeli Prime Minister Benjamin Netanyahu’s political future hangs in the balance as millions of Israelis vote March 17 in an election that most polls suggest is too close to call.

In a clear attempt to rally his right-wing base, Netanyahu announced on the eve of the election that he will not allow a Palestinian state should he win. This reverses the Prime Minister’s previously declared position on the issue.

“He is panicking. He is desperate. He is afraid that he might lose the election and the only way to persuade people to vote for him is to play this card,” Eyal Zisser, Dean of the Faculty of Humanities at Tel Aviv University, said in an interview with the New Atlanticist.

Netanyahu faces stiff resistance from the center-left opposition. The Zionist Union, led by Isaac Herzog—the son of a former President and grandson of a prominent rabbi—had a slight edge over Netanyahu’s Likud Party in the last opinion polls published March 13. Yet the race is too close to call.

With no single party expected to win an outright majority, the election will produce another coalition government. Netanyahu has an advantage here, as right and far-right parties—where he draws his support—are better represented than left-leaning parties in Israel’s parliament or Knesset, all of whose 120 members are also up for election.

Michael Oren, Israel’s former Ambassador to the United States and a former Ambassador in Residence at the Atlantic Council, is running for a Knesset seat as a member of Kulanu, whose leader, Moshe Kahlon, could become a power broker even if the party wins fewer than ten seats. That’s because Kulanu—Hebrew for “all of us”— could throw its support to either Netanyahu or Herzog. So far, Kahlon hasn’t said whom he’d back as Prime Minister, though Oren has openly criticized the foreign policies of Netanyahu, the man who once appointed him Israel’s envoy in Washington.

On Netanyahu’s watch, the US-Israel relationship has become strained. The Prime Minister’s acceptance of an invitation from House Speaker John Boehner (R-OH) to address Congress on the dangers of a nuclear deal with Iran further exacerbated bilateral tensions.

“If Netanyahu is re-elected, I think things [with the United States] will continue to deteriorate. Of course everybody will be pragmatic and understand that they need to work with Netanyahu, but the tension will build and the deterioration will gradually continue,” said Zisser. “With Herzog it is a new beginning.”

Zisser, who is also the Yona and Dina Ettinger Chair of Contemporary Middle Eastern History at Tel Aviv University, spoke in a phone interview with the New Atlanticist’s Ashish Kumar Sen. Excerpts below:

Q: Is Prime Minister Netanyahu’s reversal of his earlier stand on a two-state solution—declaring that there wouldn’t be a Palestinian state should he be re-elected—a sign of the tough race he finds himself in, and will it deepen the rift with the United States if he were to be re-elected?

Zisser: Nobody takes him too seriously. He is panicking. He is desperate. He is afraid that he might lose the election and the only way to persuade people to vote for him is to play this card. He has said before that he is ready to accept a Palestinian state. Now he says he will never accept it. Who knows what he will say if he is re-elected? He is now focused on winning the election. But, of course, deep in his heart he doesn’t want a Palestinian state near Israel.

I don’t think anyone in the world trusts him, but at least people were ready to play the game. Now they can’t play any game because if there is no room for a Palestinian state what are they going to talk about with the Palestinians? It means no peace negotiations. This will be very difficult for the international community, for the United States, to accept such a position. This means more tension and American pressure on Israel.

Q: What are Netanyahu’s prospects in these elections?

Zisser: Several days ago it seemed that he was not doing well. Now because he is panicking and has sent a clear message, ‘I am going to lose,’ some of his traditional supporters have shown empathy for him and you can hear people saying that they didn’t intend to vote for him but now it is such a desperate situation.

The issue is not Netanyahu and his party, but the right wing in general. Generally speaking the right wing enjoys a slight majority in the Israeli public, but you never know. We need to be patient.

When we look at the result, first see what is the difference between him and Herzog. People tend to believe that what used to be the Labor Party will get more votes. If it is a significant gap it’s important. Then you have to see about the other parties. There are parties that have said very clearly that they are going with Netanyahu. And there are parties that have no problem going with Netanyahu and are close with Netanyahu, but didn’t say anything about their decision on the day after the election. They might go with Herzog.

If Herzog and other moderates, or even soft right parties, get a majority, then [Netanyahu] is finished. Even parties that have announced that they will go with him have shown no enthusiasm about Netanyahu. It is quite clear that people don’t vote for him, but despite him. This is true for even those who vote for the right wing. People are simply tired of Netanyahu. That’s the mood.

Q: Did Netanyahu’s controversial recent visit to Washington and address to the US Congress help or hurt him in the polls in Israel, and how big a factor have the nuclear negotiations with Iran been in these elections?

Zisser: I don’t think it influenced the polls. At the time, yes, it did make some impact the week [the address] was delivered, but all in all it didn’t change anyone’s mind. Foreign policy and security issues are not on the agenda right now. Iran, and even the Palestinian question, for most Israelis are not [election] issues. People are focused on economic issues.

Q: Netanyahu’s main rival, Isaac Herzog, is a man you served alongside in the army. His Zionist Union coalition has maintained a slim lead in the polls. Is Herzog the right man to lead Israel and what are his prospects in these elections?

Zisser: Many people vote for Herzog because of Netanyahu. Sometimes your weakness becomes an advantage. People say [Herzog] has no charisma, he is not a retired general, and it’s a question whether you can trust him leading the country and the army into a new war. But at the same time he is a human being. He is a mensch, somebody who looks you in the eye, not somebody who gives you the impression that he is arrogant. He is a man who, despite his weaknesses, knows how to approach his political partners and [build] coalitions. He doesn’t create any antagonism.

The problem with Netanyahu’s style of leadership is that it creates antagonism within the Israeli public. If [Herzog] is elected he will not make any terrible mistakes, he is a good guy generally speaking and somebody you can count on. He is not somebody who, when you look at, you say ‘Wow, what charisma! He gave a wonderful speech. He was an excellent commander.’ That is not the case. But people say he is a good guy and in this case, that is an advantage..

Q: What effect would a Herzog victory have on the US-Israeli relationship, prospects for Israeli-Palestinian peace, and a nuclear agreement with Iran?

Zisser: If Netanyahu is re-elected I think things [with the United States] will continue to deteriorate. Of course everybody will be pragmatic and understand that they need to work with Netanyahu, but the tension will build and the deterioration will gradually continue.

With Herzog it is a new beginning. Clearly the [Obama] administration will be very happy about it. Peace negotiations could be resumed. I don’t know if both sides are ready for an agreement, but clearly a dialogue can be resumed.

And on Iran, that’s up to the United States. Israel can do very little. If the United States comes to the conclusion that it is in American interests to reach a deal with Iran, a deal will be concluded regardless of whether Netanyahu or Herzog is elected.