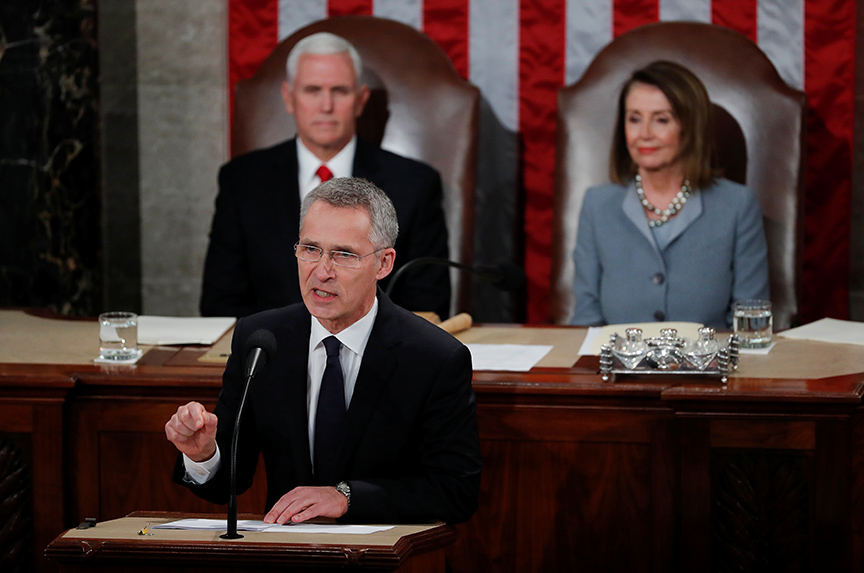 NATO Secretary General Jens Stoltenberg used his address to a joint meeting of the US Congress in Washington on April 3 to play down differences with US President Donald J. Trump and play up the virtues of the military alliance that turns seventy this year.

NATO “has not lasted for seventy years out of a sense of nostalgia or of sentiment,” but rather “because it is in the national interest of each and every one of our nations,” Stoltenberg told lawmakers.

The combined strength of twenty-nine member states means that “when we stand together, we are stronger than any potential challenger, economically, politically, and militarily,” Stoltenberg argued.

Stoltenberg was invited to address Congress by House Speaker Nancy Pelosi (D-CA) and Senate Majority Leader Mitch McConnell (R-KY) one day before the Alliance celebrates its seventieth anniversary with a meeting of foreign ministers in Washington. Stoltenberg was the first NATO secretary general to address the US Congress.

The meeting in Washington comes after a contentious NATO summit in Brussels in July 2018, when US President Donald J. Trump pushed allies to spend more on their own defense. Stoltenberg praised the efforts of Trump saying his “message is having a real impact.”

At a joint appearance in the Oval Office with Trump on April 2, Stoltenberg thanked the US president for his “strong commitment to NATO, to our Alliance, to our transatlantic bond, and especially for your very strong leadership on burden sharing.”

Trump commented that he is “very proud of what has happened over the last couple of years with respect of the relationship and NATO,” adding that he thinks Stoltenberg “has been a terrific leader.” Stoltenberg’s term as secretary general was renewed by NATO leaders on March 28 until 2022. When asked why he supported Stoltenberg, Trump said “I had no doubt in my mind who I wanted” to continue to lead the Alliance.

The NATO secretary general reported to the US Congress that “all allies have stopped their cuts” in defense spending. “Before they were cutting billions, now they are adding billions,” he said. Non-US NATO members have increased their spending by $41 billion since 2016 and Stoltenberg said “that figure will rise to $100 billion” by the end of next year.

Stoltenberg was quick to note, however, that burden-sharing goes beyond just the amount of money spent by allies. “The ultimate expression of burden-sharing is that we stand together, fight together, and sometimes die together,” he maintained.

The secretary general conceded that “questions are being asked on both sides of the Atlantic about the strengths of our partnership,” as high-profile disagreements on trade, climate change, the Iran nuclear deal, and energy create tensions between Washington and its European allies. But Stoltenberg argued that these differences are natural. “This is democracy,” he said. “Open discussions and different views are not a sign of weakness; it is a sign of strength.” He argued that NATO has seen much more serious disagreements in the past over issues such as the Suez Canal Crisis in 1956 or the Iraq War in 2003, but “despite our differences we have always been able to unite around our core task: to defend each other, protect each other, and to keep our people safe.”

Stoltenberg said that allies “must overcome our differences now, because we will need our Alliance even more in the future” as NATO confronts growing assertiveness by China and Russia, continued terrorist threats, and changing technology. “We cannot foresee the future. We have to be prepared for the unforeseen,” he explained. This means, he continued, that “we need a strategy to deal with uncertainty. We have one: that strategy is NATO.”

“A strong and agile NATO,” he argued, “reduces risks and enables us to deal with surprises when they happen.” NATO’s track record over the last seventy years proves that it “is the most successful alliance in history because we have always been able to change as the world changes.”

“Come what may,” he said, “we are stronger and safer when we stand together.”

Increasing aggression by Russia in Ukraine, Georgia, Syria, and in cyberspace has forced NATO to increase its readiness to respond to any threat from Moscow, Stoltenberg explained. NATO has already “responded with the biggest reinforcement of our collective defense in decades,” he said, reporting that “for the first time we had combat ready troops deployed in the east of our Alliance. We have increased the readiness of our forces, tripled the size of the NATO response force, modernized our command structure, bolstered our cyber defense and, stepped up our support for our close partners Ukraine and Georgia.”

Stoltenberg also expressed support for the Trump administration’s decision to begin withdrawing from the Cold War-era Intermediate-Range Nuclear Forces (INF) treaty. “NATO’s position is united and clear: Russia is in violation of the INF Treaty,” Stoltenberg said, adding that “there are no new American missiles in Europe, but there are new Russian missiles.” While he said that he continues to hope the Kremlin will return to compliance with the accord, “we must not be naïve. An agreement that is only respected by one side will not keep us safe.”

Stoltenberg praised the efforts of the United States and NATO allies to stop the spread of terrorism and their continued commitment to helping provide security in Afghanistan and Iraq.

He noted that “hundreds of thousands of troops from Europe and Canada have served in Afghanistan. Over a thousand have paid the ultimate price and many more have been seriously wounded.” NATO’s response in Afghanistan came after allies came to the aid of the United States by invoking the Article V mutual defense clause for the first and only time in the Alliance’s history. NATO allies continue to participate in Operation Resolute Support in Afghanistan to train Afghan security and police services.  Stoltenberg maintained that NATO forces “went in together [and] we will decide our future presence together and—when the time comes—we will leave together.”

Stoltenberg also marked the contributions of NATO countries in the global coalition against ISIS, which “thanks to American leadership and our collective effort” helped defeat the terrorist organization and “stopped this brutality.” NATO forces will remain in Iraq, he said, to help “the training of Iraqi forces so they can better defend their country and make sure ISIS can never return.” He added that the lesson of ISIS’ rise shows that “prevention is better than intervention.”

He recalled his time as prime minister of Norway, when more than sixty people were killed in a 2011 terrorist attack.  “Terrorism comes in many forms,” Stoltenberg said. “But they are all the same. They believe in hatred, violence, and killing innocent men, women, and children. They are nothing more than cowards.”

Stoltenberg remained confident that the community of global democracies would be able to defeat the threat of terrorism. “Terrorists attack our freedom, our values, and our way of life,” he said. “Our answer must be more openness and more democracy. Our values will prevail. Freedom will prevail over oppression, tolerance over intolerance. And love will always prevail over hate.”