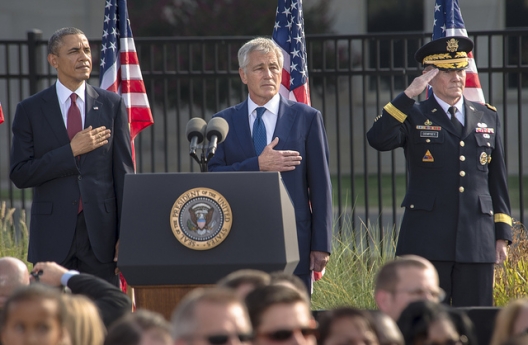 America’s generals and admirals, junior officers, and enlisted people overwhelmingly oppose military intervention in Syria. We should not know that.

Two weeks ago, Robert Scales, a retired Army two-star and former commandant of the Army War College, took to the op-ed pages of the Washington Post, writing that “after personal exchanges with dozens of active and retired soldiers in recent days,” he could confidently assert that ” the overwhelming opinion of serving professionals” was vehemently against strikes. And that, “They are embarrassed to be associated with the amateurism of the Obama administration’s attempts to craft a plan that makes strategic sense. None of the White House staff has any experience in war or understands it.” Further, “They are repelled by the hypocrisy of a media blitz that warns against the return of Hitlerism but privately acknowledges that the motive for risking American lives is our ‘responsibility to protect’ the world’s innocents.” Not only that: “They are outraged by the fact that what may happen is an act of war and a willingness to risk American lives to make up for a slip of the tongue about ‘red lines.'”

A recent and completely unscientific Military Times survey found 75 percent of troops opposed to air strikes and 80 percent believing intervention in the war at all is not in America’s national-security interests. Along with some choice words from a few senior non-commissioned officers, the report quotes a Navy lieutenant commander declaring, “With our financial problems at home, we need to save money and try to fix ourselves before we start fixing everybody else” and an Army captain philosophizing, “To say that we can take military action and there will be no reaction … is the same faulty thinking that thought we could do ‘shock and awe’ [in Iraq] and be done in a year.”

Many reports in recent weeks have expressed frustration from serving officers, most of whom “agreed to speak only on the condition of anonymity because military personnel are reluctant to criticize policymakers while military campaigns are being planned.”

In fact, they ought be more than reluctant. They simply should not do it.

For the record, I tend to share much of the skepticism about the now-on-hold operation and frustration with the public diplomacy that got us here. For that matter, I sympathize with members of the armed services, many of whom have been deployed multiple times to fight in the wars in Iraq and Afghanistan, in being hostile to the idea of yet another engagement — even one that would ostensibly be limited to a few airstrikes. But while service members are human beings and will naturally have private views on proposed military action, they have a professional duty to refrain from public commentary on decisions that are the purview of Congress and their commander-in-chief.

It’s a fundamental tenet of our system that civilian leaders make policy and that soldiers, sailors, airmen, and Marines carry it out faithfully and vigorously. For members of the uniformed military, and in particular its commissioned officers, to publicly question the president on such matters is a violation of professional military ethics and is dangerous to civilian-military relations.

In that spirit, General Martin Dempsey, the chairman of the Joint Chiefs of Staff, pointedly refused to give his personal views on the wisdom of kinetic action in Syria when Senator John McCain and others asked for it in mid July, declaring it “a decision for our elected officials, not for the senior military leader of the nation.” The next day, in response to a written demand from the leadership of the Senate Foreign Relations Committee, Dempsey provided a very detailed analysis of his “best military advice on how military force could be used” so that policymakers could “decide whether it should be used.”

So, for example, it was entirely proper for Marine Lieutenant Colonel Gordon Miller to write a commentary, in his capacity as a visiting fellow at a D.C. think tank, outlining “Consequence Considerations of a Syrian Strike.” First, the analysis was strictly on matters of military and strategic efficacy. Second, it was delivered before his commander-in-chief had declared striking Syria to be American policy.

As with members of any other professional, military officers should speak out on matters within their scope of expertise. It is not only permissible but encouraged for them to question military doctrine, challenge the way in which ongoing wars are being managed, and even lampoon the competence of their senior military leadership in the pages of their professional journals. But what they may never do is give the impression that their institutions are anything but fully committed to executing their oath of office or have any opinion whatsoever about which person or party should govern the nation.