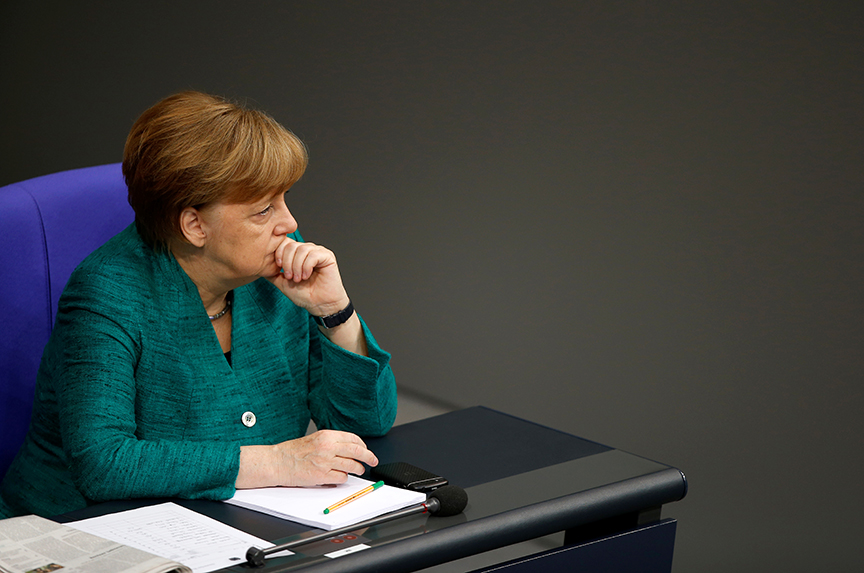 There seemed to be a plan behind French President Emmanuel Macron and German Chancellor Angela Merkel’s visits to Washington this week: a carefully choreographed tag team effort to tame US President Donald J. Trump’s unilateralist impulses on tariffs and the Iran nuclear deal that cause serious friction in transatlantic relations.

To some analysts, the plan was that amid all of the pomp and circumstance of his state visit—and plenty of opportunities to play to their personal relationship—Macron would leverage his “bromance” with Trump and France’s participation in recent US-led strikes in Syria to secure a permanent exemption from US steel and aluminum tariffs for the European Union (EU) and a commitment not to pull out of the nuclear deal with Iran.

At the very least, Macron would lay the groundwork for Merkel’s meeting with Trump at the White House on April 27.

But when the German chancellor arrives in Washington, she has little to work with on the two issues that will likely dominate her meeting with Trump.

First, there are a number of US trade measures that target China, but could cause collateral damage in Europe. Most urgent for the European Union (EU) is a permanent exemption from US steel and aluminum tariffs by a May 1 deadline. Without such an exemption, the EU would be forced to retaliate in what could become a full-blown trade war between the transatlantic partners. This would disproportionately hurt Germany.

Second, together with France, the United Kingdom, and the EU, Germany has urged Trump not to pull out of the 2015 Iran nuclear deal, also known as the Joint Comprehensive Plan of Action (JCPOA). Trump faces a May 12 deadline to re-certify Iran’s compliance with the terms of the nuclear deal. A failure to do so would mark the United States’ exit from the deal.

The agreement to freeze Iran’s nuclear program is viewed as a major achievement of the EU’s multilateral diplomacy. EU-Iranian trade has grown rapidly since the JCPOA resulted in the lifting of some sanctions on Iran. European companies stand to lose multi-million-dollar contracts in the event of new US sanctions. And there are concerns about a potential nuclear arms race in the Middle East should the deal come apart and Iran resume its nuclear efforts.

On both counts, the high expectations that a Macron-Merkel tag team strategy would get Trump under control and produce immediate results always seemed unrealistic. Trump has shown little inclination to change his mind on major campaign promises, especially on national security and trade.

Unmoved by three days of backslapping, hugging, and handholding with Macron, he made no commitments and stuck to his positions. After the French president suggested a new deal on Iran was in the cards, one that would preserve the existing elements and address US criticisms, Trump refused to commit and again derided the JCPOA as an “insane deal.” And on trade, Trump said he would prefer to negotiate with France directly rather than with the EU, returning to his criticism of the bloc and multilateralism.

But what Macron could not do, Merkel is even less likely achieve during her visit. For one, much has been made of the very different personal chemistry between Trump and each of the two European leaders.

There is the undoubtedly strong personal relationship with Macron, dating back to Trump’s visit to the 2017 Bastille Day celebrations in Paris complete with a military parade and maintained by the French president’s more pragmatic approach to his American counterpart.

Contrast that with Merkel who seemed to have botched her relationship with the US president from the start with a conditional, if not moralistic, congratulatory statement after Trump’s election—an uncharacteristic move by the German chancellor usually known for pragmatism herself. Her first in-person meeting with the new US President did nothing to improve the atmospherics as Trump focused on the US trade deficit with Germany and the country’s lackluster defense spending, both broader issues at the heart of his campaign.

The fact that Merkel, as a woman, seemed the unrivaled leader of Europe and was soon crowned the “defender of the liberal order” by the media probably did not help her relationship with Trump.

Not surprisingly, much commentary has focused on the stark contrast between the two visits: Three days, an official state visit, a helicopter sightseeing tour and dinner at George Washington’s home, a state dinner, and an address to a joint meeting of Congress for Macron, and a mere one-day visit with a working meeting at the White House for Merkel.

But more important than the personal relationships or the format of the visits is that Merkel brings with her to Washington few, if any, real bargaining chips.

When Trump approaches international issues through a lens of hard, military power, Macron could point to France’s participation in the recent US-led strikes against Bashar al-Assad’s regime in Syria as well as its military contributions in Africa, which are widely recognized among US defense leadership.

Germany did not participate in the Syria strikes and assumed a rather awkward position afterwards, not least because of a lack of any real military capabilities. This touches directly on Trump’s major criticism of Berlin’s continued failure to meet NATO’s two percent of GDP target for defense spending. This question will undoubtedly come up at Merkel’s meeting on April 27. She will have little to show for.

Merkel’s junior coalition partner, the center-left Social Democrats, is strongly opposed to any significant defense spending increases and public opinion remains similarly critical. And not a month seems to go by without new reports about the inoperability, ageing, or delay of a major weapons platform of the German armed forces. Berlin’s ability to point to its significant financial contribution for reconstruction in Syria, Iraq, and the wider neighborhood is unlikely to really impress Trump.

On trade, Germany’s export-dependent economy and its integration into global value chains make it especially vulnerable to major disruptions in international commercial flows and the global trading system. Even if German steel and machinery exports to the United States were to be exempted from US metal tariffs aimed at China, the country’s companies risk getting caught in the crossfire of broader US measures.

Chinese retaliation to the US imposition of $60 billion in annual tariffs on Chinese imports could hurt China-bound luxury cars from the US plants of BMW and Daimler—the largest US vehicle exporters by value. Analysts estimate German carmakers alone could lose $1.7 billion from such retaliation.

Merkel’s effort to divert Trump’s fixation with a $64 billion US trade deficit with Germany and highlight the benefits of German investment in the United States for American growth, jobs, and skills seems to have left little impression on Trump when the two met in Washington last year.  The idea that an offer of a tariff-only EU-US trade agreement could sway Trump on the steel and aluminum tariffs seems unlikely too in the current climate. Any such deal would still prove politically difficult on either side of the Atlantic.

Last but not least, Merkel comes to Washington from a weaker position at home and in Europe. Eleven months after her first visit to the Trump White House, the lengthy and troubled process of government formation in Berlin and another grand coalition with the Social Democrats have cut into her popularity and grounded her international initiatives.

Meanwhile, Macron, with his fresh-faced politics, his commitment to the EU and his proactive approach to eurozone reform, appears to have “dethroned the ‘Queen of Europe’” as the continent’s leader, as the German publication Der Spiegel put it recently.

But a relatively weaker Merkel could offer an unlikely glimpse of hope that the April 27 meeting with Trump will go better than last year. A chancellor-formerly-known-as-the-Queen-of-Europe would appear much less threatening to Trump than the Merkel he seemed to half ignore, half embarrass at their first personal encounter. Many have learned the hard way not to underestimate the German leader who rarely makes the same mistake twice. So, considering the list of contentious deals, deadlines, and personality differences, perhaps the best outcome on April 27 is an uneventful meeting—just the way Angela Merkel likes it.