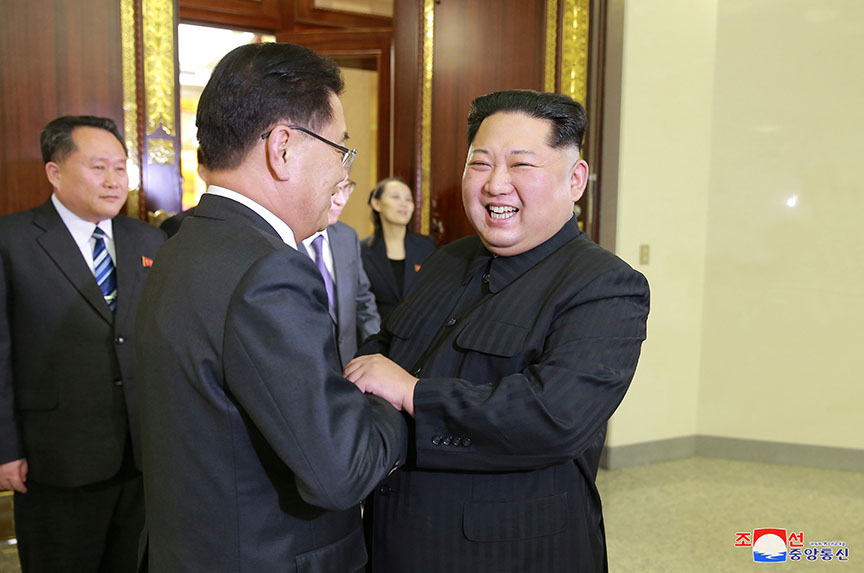 North Korean leader Kim Jong-un has, in a surprise move, reportedly agreed to suspend nuclear and missile tests and start talks with the United States on dismantling his nuclear weapons. Both were prerequisites set by US President Donald J. Trump’s administration before it would agree to an initial, exploratory meeting.

US President Donald J. Trump promptly tweeted that the rare opportunity to defuse the nuclear crisis on the Korean Peninsula, while a sign of “possible progress,” could also be “false hope.”

“There’s only one way to know if it is false hope and that is to test it by sitting down for talks with the North Koreans,” said Robert A. Manning, a senior fellow in the Atlantic Council’s Scowcroft Center for Strategy and Security.

“The North Koreans have said everything he has wanted them to say,” Manning said. “The ball is now in Trump’s court.”

Kim reportedly made the offer of talks in a rare meeting with South Korean envoys in Pyongyang on March 6. According to South Korean officials, Kim also offered to suspend all nuclear and missile tests during the course of these negotiations.

“A moratorium on testing is enough of a good-faith gesture to begin diplomacy,” said Manning.

Why is this significant?

The North Korean regime spent much of 2017 carrying out provocative missile launches, and even a nuclear test.

Kim agreed to a South Korean offer to de-escalate the crisis ahead of the recently concluded Winter Olympics. As a result, North Korean athletes participated in the Olympics in Pyeongchang, South Korea. Senior North Korean officials, including Kim’s sister, traveled to South Korea for important meetings.

This thaw follows the imposition of unprecedented international sanctions that seek to choke off the energy and financial supply that has kept North Korea’s nuclear ambitions alive.

Manning credits the sanctions for Kim’s more conciliatory tone. “I think the sanctions have started to bite, disrupt their economy, and are making Kim very uncomfortable,” he said.

Building off the Olympic detente, Kim had a rare meeting with two South Korean envoys in Pyongyang this week. Besides the offer to the United States, that meeting yielded an agreement to host a summit between Kim and South Korean President Moon Jae-in in April.

Kim’s father, Kim Jong-il, last participated in such summits with his South Korean counterparts—Kim Dae-jung and Roh Moo-hyun—in 2000 and 2007, respectively.

Manning said the 1991 North-South reconciliation and nonaggression agreement should serve as the basis for the proposed April summit noting that Kim has always had a willing partner for peace talks in Moon. But it is unclear if South Korean envoys to Pyongyang insisted on such conditions.

In 2005, North Korea agreed to end its nuclear weapons program in exchange for security, economic, and energy benefits. The agreement was the result of six-party talks that included the United States, North Korea, South Korea, China, Japan, and Russia.

In April 2009, North Korea pulled out of the six-party talks. The decision was triggered by a sharp United Nations Security Council presidential statement and sanctions in response to a North Korean rocket launch. The core reason, however, was transparency—Pyongyang’s refusal to allow the International Atomic Energy Agency (IAEA) adequate access to inspect its nuclear program.

“There is no point negotiating more agreements with North Korea. We have a million agreements, but no progress,” Manning said, suggesting that the 2005 agreement should be the starting point of diplomacy. The last two UN Security Council resolutions on North Korea similarly urged all sides to return to the six-party talks and implement the 2005 agreement.

“That whole deal moves on an action-for-action basis to build trust, as there is none now, and it offers North Korea everything it could possibly ever want—economic aid, energy assistance, security guarantees, US-North Korea normalization of relations, and a peace treaty, but it is all sequenced based on progress on denuclearization,” said Manning.

Manning said Moon’s suggestion of a nuclear freeze as an interim step is “dangerous” because North Korea will seek to extract an acceptance of it as a nuclear weapons state and the lifting of all sanctions, which would be unacceptable.

The ball is in Trump’s court

On Twitter, Trump welcomed what he described as “possible progress” on North Korea. “For the first time in many years, a serious effort is being made by all parties concerned,” he wrote. “The World is watching and waiting! May be false hope, but the U.S. is ready to go hard in either direction!”

The Trump administration should take up North Korea’s offer for talks, said Manning, but he feared that Trump may not have a game plan.

“We will be missing an opportunity and also lose the moral and political high ground if we don’t immediately respond,” he said.

Manning suggested a high-level meeting to drive home the advantage. However, US diplomacy on the Koreas is hamstrung by two facts—the United States does not as yet have an ambassador to South Korea and Joseph Yun, the State Department’s point man on North Korea, resigned in February.

Given these prominent absences, Manning suggested Trump appoint a special envoy who would have the US president’s ear. He recommended US Sen. Bob Corker [R-TN] as a good candidate for the job. Corker, who has had a tense relationship with Trump in the past, appears to have mended ties with the president.

Corker, who is chairman of the Senate Foreign Relations Committee, has experience on the issue, is well respected in Congress, and, perhaps most significantly, has Trump’s support. “You want someone as an envoy who can tell the North Koreans that he represents Donald Trump,” said Manning.

But Manning is cautiously optimistic about the prospects for progress. “Kim Jong-un’s behavior over the last couple of months has been very unusual,” he said. “We are in unchartered territory.”

Ashish Kumar Sen is deputy director of communication, editorial, at the Atlantic Council. Follow him on Twitter @AshishSen.