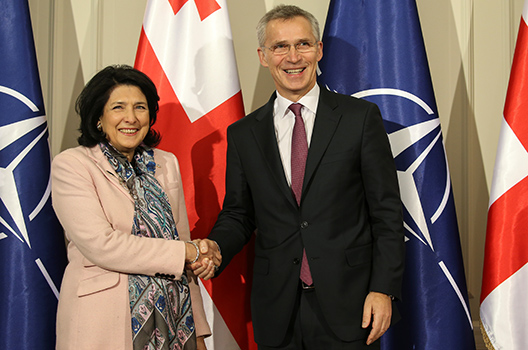 On a visit to Tbilisi in March, NATO Secretary-General Jens Stoltenberg reiterated a decade-old promise: Georgia will eventually join the Western military alliance. However, despite Stoltenberg’s comments, there is little discernible evidence to suggest membership for Georgia is in the cards.

At NATO’s Bucharest Summit in 2008, the Alliance welcomed the transatlantic aspirations of Georgia and Ukraine and agreed that both countries will eventually become members of NATO. Since then, Georgia has taken meaningful political, economic, and military steps westward.

NATO member states and Georgia itself have in many ways striven to substantiate the lofty claims made in Bucharest. Along with defense assistance packages and domestic reforms, over 11,000 Georgian troops have contributed to the NATO mission in Afghanistan. And yet, almost eleven years on, the same sobering reality hangs over discussions of Georgia’s NATO accession today as it did in 2008: there is no Membership Action Plan (MAP) for Georgia.

The principal reason for this is a reluctance among NATO member states. Georgia’s territorial integrity has, by some measures, been compromised since the early 1990s. And Russia, beyond maintaining peacekeeping contingents in the breakaway regions of Abkhazia and South Ossetia and recognizing the regions’ statehood, has maintained its categorical opposition to Georgia’s NATO membership since the Bucharest Summit.

Russia, according to Alexander Vershbow, a distinguished fellow at the Atlantic Council’s Scowcroft Center for Strategy and Security, “thinks it can block NATO accession by occupying Georgian (and Ukrainian) territory. Georgia is stuck in limbo as long as Russia is ruled by leaders ready to use force to block its path to NATO.”

The prospect of Georgia’s membership raises concerns about NATO’s responsibilities in the event of a possible escalation of hostilities by Russian-backed separatists in Abkhazia and South Ossetia.

There are legitimate concerns about NATO’s collective defense clause — Article V of the Washington Treaty — and how Georgia’s membership, in the event of a Russian escalation in Abkhazia and South Ossetia or against Tbilisi, would force NATO to confront Vladimir Putin’s aggression in the South Caucasus. But Article V’s language allows for deliberation among the Alliance in the event of a military strike against any of its members so that an appropriate response can be debated and tailored.

The Alliance could, according to Alexander Vershbow, who served as deputy secretary general of NATO from 2012 to 2016, “agree that the Article V security guarantee would extend only to those parts of Georgia under Georgian government control.” Such a move would reaffirm NATO’s flexibility and its willingness to counter Russia’s provocations, features of the Alliance in doubt since the annexation of Crimea in 2014 and the Russian invasion of eastern Ukraine.

NATO’s seventy-year history, much of it dominated by the Cold War, has shown that membership in the Alliance is an effective deterrent to Russian aggression. While the calculus may be different in 2019, showing a commitment to its open-door policy and inviting Georgia into the fold may still be the best way to push back against Putin’s subversion.

Moreover, by many measures Georgia is as poised as ever to become a member of the Western alliance. Salome Zourabichvili’s young presidency is unabashedly pro-Western, Prime Minister Mamuka Bakhtadze leads a government insistent upon proving its willingness for reform and Euro-Atlantic integration, and, perhaps most significantly, a January poll from the National Democratic Institute found that 78 percent of Georgians, the highest number since 2013, support NATO membership for their country.

If the specter of a confrontation with Russia continues to prevent NATO from acting true to its “open-door” policy and keeps Georgians from realizing their demonstrated desire to pivot to the West, NATO will only see its influence in the South Caucasus diminished and another thriving democracy stifled by Russian interference.

But, as Lukas Trakimavičius with the Economic Security Policy Division of the Lithuanian Ministry of Foreign Affairs recently noted in the New Atlanticist, NATO’s longevity, and the enduring security of its member states, is thanks in part to its alacrity in a complex and often imperiled world.

April 4 marked the seventieth anniversary of the signing of the Washington Treaty establishing NATO. At a time when international norms and transatlantic cooperation seem to be more vulnerable than ever before, the Alliance should double down on its mission to safeguard the security and prosperity of European states. Finally granting Georgia the opportunity to contribute to and benefit from NATO membership will illustrate that age has not diminished the Alliance’s resilience and adaptability.

NATO should seize the moment and fulfill its decade-old promise. Hesitation to follow through risks discrediting NATO’s declarations and alienating Georgians who, despite Russia’s best attempts, have maintained their determination to pursue a course of Euro-Atlantic integration. Leaving Georgia with a promise as protection in an increasingly dangerous neighborhood may only encourage Russia to exploit the West’s hesitation and retard the tenuous progress made in Tbilisi thus far. With all talk and no meaningful action toward a MAP, Stoltenberg’s comments may begin to sound to Georgians like a platitudinous refrain.

Colby Galliher is an intern with the Atlantic Council’s Eurasia Center. You can keep up with the Center’s work @ACEurasia.