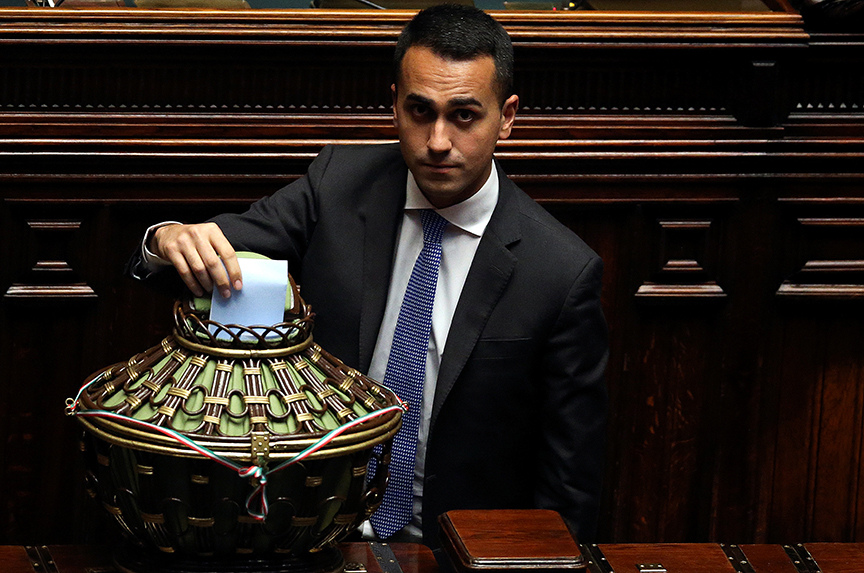 Italy’s populist Five Star Movement and the League have finalized a coalition agreement that challenges the consensus of the European Union (EU).

There are still a couple of hurdles to be cleared: the parties have yet to agree on a candidate for prime minister and supporters of the Five Star Movement are voting in an online poll this weekend to approve or reject the agreement. Given that many Five Star voters come from the left and the League is far to the right, the outcome could be a surprise. But if the party leaders get their way, Europe’s fourth-largest economy will soon be governed by an anti-EU coalition.

There are two immediate challenges for the rest of the EU.

First, there are the two parties’ spending plans. They want to reduce the personal tax code to two rates, which would lower taxes for middle- and high-income residents; introduce a €780 monthly basic income for poor families; and repeal 2011 pension reforms that raised the retirement age and made the system sustainable in the long term. It is unlikely that they will make good on all of these promises. Italian politics is notoriously slow. But any one of these policies could be enough to raise the deficit over 3 percent of GDP, which is the EU maximum.

The European Commission has repeatedly given countries, including France and Spain, reprieve from the fiscal regime, but on the condition that they would work to reduce their deficits. It could soon face a government that doesn’t care about the rules—and says so. The commission would have the power to fine Italy in an attempt to bring it into line, but that is risky without a consensus from the member states. A country like Greece, which is ruled by a left-right Eurosceptic pact not unlike the Five Star-League matchup, could be tempted to speak out against a penalty in order to get an exemption from the rules itself. Austerity will then be dead.

The second challenge is the parties’ sympathy for Russia. Both campaigned for East-West rapprochement. The Five Star Movement at one point even wanted to take Italy out of NATO. Its coalition agreement with the League calls for the lifting of EU sanctions on Russia, which are up for renewal every six months. Greece and Hungary are also known to oppose the sanctions regime, but they never had a strong enough ally to back them up. With Italy in their corner, the camp that is friendly to Russian President Vladimir Putin may finally have enough heft to change EU policy.

In the longer term, there is a third challenge.

A year ago, the election of Emmanuel Macron as president of France was hailed as an opportunity to give the EU new purpose. Macron introduced a range of proposals to reinvigorate the European project, from a common eurozone budget or European Monetary Fund to finance investment in weaker member states to harmonizing tax rates to creating an EU military budget and intervention force. Many of those ideas received a lukewarm reception in Germany and other rich nations, where the fear is that closer eurozone integration will lead to transfer union: the permanent subsidization of the south by the north. Now those ideas are dead in the water.

Italy, traditionally pro-EU, was Macron’s strongest ally. The allies France is now left with are Spain and smaller nations, such as Belgium and Portugal. EU reform may still happen; some proposals have been embraced by the European Commission and, once they are in the institutional pipeline, they are hard to stop. But they won’t be of the scale Macron dreamed of. With Italy on the side of Viktor Orbán and Vladimir Putin, the best the EU can do is muddle through.