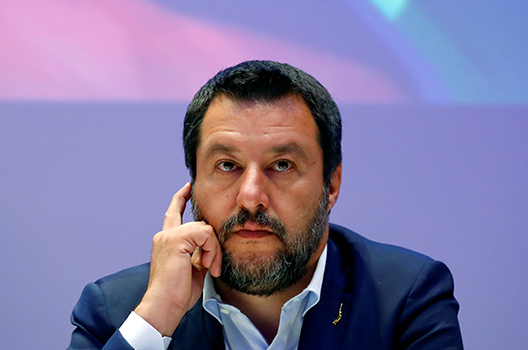 With European Parliament elections fast approaching, Italy is on the verge of a political crisis—but it has nothing to do with Europe. Neither the right-wing League nor the anti-establishment Five Star Movement—the two partners of the unlikely populist coalition that has ruled Italy since 2018—has made Europe the focus of their campaigns, albeit both having fueled anti-EU sentiments in recent years.

Rather, the potential political crisis is due to latent tensions between the two ruling parties that have finally come out into the open. These tensions threaten the survival of a government that international observers had initially looked at, with a mix of concern and interest, as a possible forerunner of similar formulations across Europe and the West.

For all the excitement the “yellow-green” Five Star Movement-League coalition experiment generated in the likes of Steve Bannon and other anti-liberal ideologues, in its current political configuration Italy is hardly in a position to lead a “populist international.”

There is now a question of how much longer the current government will last, and whether the League under the leadership of Deputy Prime Minister and Interior Minister Matteo Salvini will command enough support to create a new government, perhaps relaunching from a position of strength a center-right alliance previously led by Silvio Berlusconi (The former prime minister’s party, Forza Italia, is now struggling to reach 10 percent in the polls

The fragile balance of power within the ruling coalition has been undermined by the decline of the Five Star Movement (which opinion polls suggest has lost a significant chunk of support—perhaps up to a third since the general elections) and the surge of the League (which earned 17 percent in 2018 and is now polling around 30 percent). The clumsiness and policy incompetence of the Five Star Movement—an original yet dubious mix of redistributive, environmentalist, but also populist and conspiracy-minded platforms—have cost it dearly (the poor record of the Five Star Movement mayor of Rome, Virginia Raggi, is just one example), eroding much of its original innocence, vibrancy, and appeal. The Movement is far from dead and may very well stage a comeback, especially if over time voters become concerned with an unbound League. But it may be difficult for the Movement to find another open-minded partner for a coalition government.

With its more straightforward law and order and anti-immigration message, the League has largely monopolized media attention and public debate – overshadowing the Five Star Movement. The party has attracted a growing number of voters who believe that Italy needs straight talk and tight-fisted policies rather than solidarity and political correctness (never mind Italy’s very dangerous and tragic experience with similar approaches in the past). A skillful politician that has never ceased campaigning in the streets and on social media, Salvini has become Italy’s leader, for now largely eclipsing all others, in particular Five Star Movement head Luigi Di Maio.

The stability of the coalition government is further undermined by the unhealthy state of the Italian economy, which is projected to stagnate in 2019 after entering a technical recession last year. Differences between the two parties’ economic platforms—and the tilt toward the more populistic aspects of their respective agendas—are to be blamed. The redistributive policies promoted by the Five Star Movement have been modest in scale due to the constraints imposed by Italy’s troubled finances and the League’s reluctance to embrace welfarism. It is highly doubtful that they will be able to revive internal consumption, let alone meaningfully alleviate unemployment and poverty.

Meanwhile, tax cuts pushed by the League are only now being put on the agenda and it is not clear whether the outcome will be a real “flat tax,” as Salvini has been promising. More crucially, the unwillingness of both parties to implement any serious structural reforms casts shadows on Italy’s economic prospects and undermines the overall credibility of the ongoing political course. The lack of growth may end up hurting the rise of the League itself, a party that historically enjoys broad-based support in the economically dynamic northern regions of Italy. Additional challenges to the League may come from ongoing corruption investigations, which recently forced Five Star Movement Prime Minister Giuseppe Conte to sack the League’s Transportation Undersecretary Armando Siri. Most recent polls already show some loss of support for the League, together with a large number of undecided voters who might decide to never cast their ballot, return to the Five Star Movement, or even support the embattled center left opposition. While displaying political leadership on corruption and other cases, Conte remains a novice politician and will be increasingly busy keeping together a riotous coalition.

If he does not shoot himself in the foot over the next few weeks by overplaying his hand, Salvini is going to be the only Italian political leader who could harness enough leverage to play a meaningful role after the European elections. While having a much lower European profile, Salvini has already successfully endeavored to bring closer together different parties that belonged to separate European right-wing groups, from the Rassemblement National in France to Alternative for Germany. Salvini has also been flirting with Hungarian Prime Minister Victor Orbán’s Fidesz—an increasingly problematic member of the European People’s Party (EPP)—and with Poland’s Law and Justice Party. The
Five Star Movement has struggled with alliance politics in Europe, with less and smaller counterparts to call on.

Challenges abound. Key EPP leaders have ruled out an alliance with the populists and the Central European countries have very different views from Salvini’s League on Russia and other key European issues. Current polls indicate that sovereigntist parties will not be able to fundamentally change the balance of power in Brussels. But in case of an unsettled situation, Salvini could be expected to act alternatively as spoiler or bridge builder, if not a kingmaker of sorts.

After all, the League is among the oldest right-leaning populist movements in Europe, has proved remarkable adaptability, and has a track record of ruling with more mainstream center-right parties both at the national and local levels.

Emiliano Alessandri is an analyst of European and transatlantic affairs, with a focus on Southern Europe and the Mediterranean region. He can be reached at [email protected]