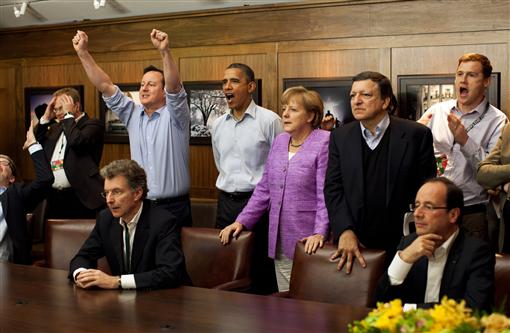 America deserves better. If only this year’s presidential candidates were as focused on global competitiveness as are America’s business leaders, the world’s most important economy and democracy would already have become the “Comeback Kid,” portrayed on this week’s Economist cover as a muscle-bound Uncle Sam.

We are witnessing the most expensive and one of the most negative presidential contests in US history. Thus far it is serving little purpose aside from enriching  the advertising industry.

The most crucial question for American centrists, who are likely to decide this November’s elections (and I count myself as a card-carrying member), is whether Obama or Romney can reverse the dangerous signs of eroding U.S. competitiveness and shore up the beginnings of an economic resurgence.

It is a question of historic significance.

Just as the best candidate during the four decades of the Cold War era was the one who most clearly understood how to tap America’s dynamism and stare down a very real Soviet threat (Ronald Reagan fit that bill), today’s most effective president will be the one who can best navigate a similarly extended period that is shaping up to be an era of global competition.

In this new age, great-power military conflict of the US-Soviet variety is all but unthinkable, yet smaller rivalries proliferate where there are economic gains to be had. It is an age in which the battlefield has been transformed by communication technologies and the addition over the past two decades of a billion people to the global workforce in emerging nations. They are not only manufacturing shirts and toys but also, empowered by the Internet, competing against America’s highly skilled computer engineers, lab technicians and architects with their outsourced labor.

The good news is that America is uniquely qualified to do well in this less dangerous yet more complex era, given the scale of its market, its agile private sector, its youthful demographics (compared with other advanced economies) and the fact that, unlike Europe, it acted more quickly and decisively to address its financial rot and remake its banks. America leads the world in exploiting shale gas, and its export sector is thriving. The US has a fighting chance to meet President Obama’s goal, stated in his 2011 State of the Union address, of doubling exports in five years. Exports to China alone have grown by 65 percent since 2007, making the country the third-largest American export market.

The bad news, captured Tuesday in Federal Reserve Chairman Ben Bernanke’s bleak testimony to the Senate Banking Committee and in this month’s IMF annual report on the U.S. economy, is that the threats to this potential rebound are immediate. IMF Managing Director Christine Lagarde called the US economic recovery “tepid,” predicting the US will have just 2 percent growth through the rest of the year. The downside risks that could reduce growth further include the euro zone crisis, the slowing growth of emerging markets and Washington’s political dysfunction.

Although the American business environment remains one of the world’s most attractive, a recent survey by Harvard Business School shows that 70 percent of its alumni expect American competitiveness to decline over the next three years. During 2011 alone, more than 1,700 respondents were personally involved in decisions about whether to place business activities in the U.S. or elsewhere, and in two-thirds of the cases they decided against the US.

The respondents pinpointed weaknesses that the candidates should be addressing, but are not. Among them: America’s cumbersome tax code, its failing elementary education, its overregulation, its aging infrastructure, its inadequate workforce skills and, yes, its political gridlock.

Many see jobs as the goal, when in fact it is only through restoring American competitiveness that good jobs can be created and sustained. Many see income inequality as the central problem, when in fact inequality is the outcome of underlying problems in skills, opportunities and other fundamentals that must be addressed if inequality is to fall.

In his 2011 State of the Union address, President Obama dramatically spoke of “our generation’s Sputnik moment,” comparing the new global competitiveness challenge to what Dwight D. Eisenhower faced following the Soviet launch of the first orbiting satellite. The outcome was a national mobilization that resulted in the birth of NASA, the education of a new generation of engineers and, ultimately, victory in the space race.

The problem is that Obama and Romney now are acting more as politicians out to win the next turn of the news cycle rather than as statesmen providing a roadmap for this new era of global competition. The Obama campaign’s portrayal of Romney as a rapacious capitalist is as unhelpful as the Romney campaign’s attacks on Obama as a closet Marxist.

The American private sector is doing much to rise to the challenge. It’s time for the two men vying for the Oval Office to stop playing gotcha and provide leadership for this new generational challenge. They may have to channel Eisenhower.