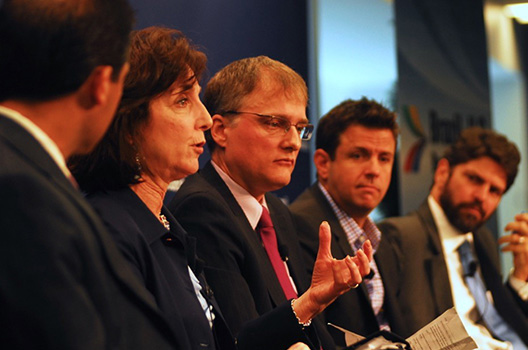 With less than two weeks to go before Brazilian President Dilma Rousseff’s June 30 trip to Washington, the State Department’s top Latin America official says she’s optimistic the long-delayed visit will mark “the beginning of a new chapter in our relationship.”

Roberta Jacobson, Assistant Secretary of State for Western Hemisphere Affairs, spoke June 19 at the Atlantic Council’s Adrienne Latin America Center. The diplomat—nominated by President Obama to be the next US Ambassador to Mexico— conceded that it hasn’t been an year and a half since Rousseff cancelled her planned October 2013 trip to Washington following revelations by NSA whistleblower Edward Snowden that the National Security Agency had been monitoring Rousseff’s phone calls and emails.

“Our relationship has been tested over the last 18 months, and there’s no doubt that because of that, we look to June 30 as a way to relaunch that relationship,” she said. “But the recent drumbeat of engagement allows us to ramp things up and prepare for this presidential visit without the usual sense of ‘maybe we will not meet expectations.'”

“For the United States and for Brazil, this visit really is critical,” said Jacobson, a State Department veteran focusing on Latin America since the early 1990s. “Our countries have so many similarities, and we really are natural partners. In many ways, it is much more artificial for us to be in tension than it is to be working together. We share democratic values and the commitment to diversity.”

While declining to discuss specific announcements that may come out of the visit, Jacobson did say that “in the end, people will be surprised by how many areas we’ll be able to move forward on. Maybe that’s because for awhile, things slowed down—but they never really stopped. They just weren’t at the highest level.”

One of those areas where progress might be made is in climate talks. Rousseff, facing declining popularity numbers back home in the wake of a widening scandal at state-owned oil monopoly Petrobras, is eager to score a victory in Washington, and a bilateral deal on clean energy technology could be in the works.

“The Obama administration places a great importance on moving toward the climate conference in Paris,” said Jacobson, “but it’s really hard to see that as the centerpiece because there’s a great deal of diversity in this visit. We’ve got ten or fifteen things here, all of them very important.”

US-Brazil trade came to $129 billion in 2014, “but we know it could be larger,” she suggested, adding: “We’re about to sign a Social Security totalization agreement, which will save US and Brazilian companies more than $900 million over the first six years. And despite all our talk about big companies, small businesses are the job generators, so we’re connecting thousands of small business incubators in the two countries.”

Jacobson hinted that the US-Brazil talks will focus on education, science and technology, though “there will also be movement on defense cooperation as part of this visit.”

On the regional front, Jacobson expressed hope that Brazil—which shares a 1,367-mile border with Venezuela—would use its political and economic heft to guide the oil-exporting nation away from authoritarianism and back towards democracy.

“There’s no doubt that every meeting we’ve had, either regionally or with individual countries, has touched on Venezuela. None of us can escape that these days,” she said.

“For a long time, we have believed that Brazil is a crucial actor in Venezuela. Its influence is critical, not only bilaterally but also within UNASUR, which has played an important role vis-à-vis Venezuela. At one time, the foreign ministers of Brazil, Ecuador and Colombia were playing a pretty crucial role,” she explained. “We hope that can re-emerge. Setting elections and freeing political prisoners are of particular importance.”

Jacobson said political instability in Haiti might also be discussed when Rousseff meets Obama. She noted that with elections to take place soon in that Caribbean nation, “Brazil obviously plays a critical role as leader of the Minustah peacekeeping mission there.”

Curiously, Jacobson didn’t mention Cuba, even though she helped forge a rapprochement last December between Washington and Havana after more than half a century of mutual hostility—and even though Brazil is pouring $1 billion into construction of the Mariel free zone west of Havana.

Sennes, an economist who has written extensively on Brazilian foreign policy, said the June 30 visit is “very important politically” for Rousseff, whose popularity numbers have tumbled in the wake of an emerging kickball scandal at state-owned Petrobras. More than 65 people have already been arrested—many of them politicians and government employees—and more arrests may be forthcoming.

“Right now, Dilma faces a very complicated political contest,” he said. “The coalition that she and Lula [Former President Luiz Inacio Lula da Silva] were leading is completely breaking down, and she’s facing the risk of political isolation. Part of this has to do with the emergence of opposition groups, so for her, the timing is very important.”

Asked what tangible results are likely to come out of Rousseff’s visit, Jacobson said that while she’d prefer to leave key policy announcements to the White House, “Presidential visits in and of themselves do two things: they are both symbolic and important as public demonstrations of a relationship and where it stands. The relationship can be incredibly busy and dynamic underneath, but if there isn’t an external perception that it’s healthy at the top, that’s a problem.”

Jacobson added: “This visit will solidify that, in the public mind, this is a healthy relationship moving forward. But as bureaucrats know, presidential meetings are action-forcing events. So the agreement that maybe would not have gotten done for another six months gets done now.”