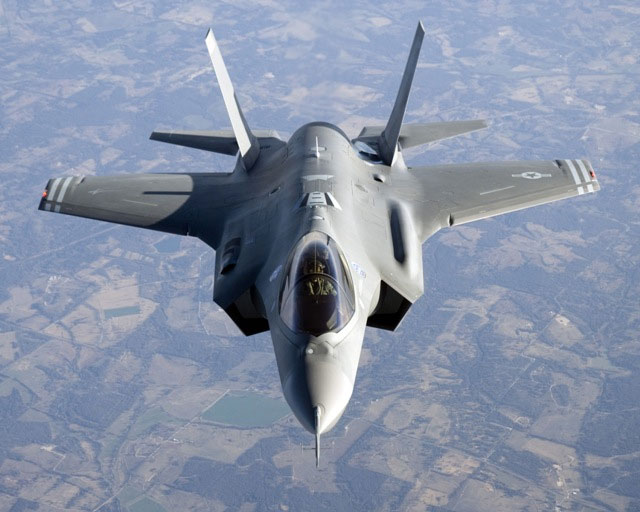 F-35 Lightning II is a name to conjure with. Otherwise known as Joint Strike Fighter (JSF) ten countries are collaborating under US leadership to build a fifth generation multirole fighter that can apparently do everything and not be seen doing it – whatever it is it does. Last week BaE systems announced the opening of a $175m plant in Lancashire, England to build the things. Being a Yorkshireman this is a bad mistake in and of itself as nothing good has come out of Lancashire since the fifteenth century Wars of the Roses (which was not very good either). Suspiciously this announcement comes hot on the heels of news that the British Government is having yet another wobble over whether to buy the F-35B STOVL (Short Take-Off or Vertical Landing) version or the F-35C conventional aircraft-carrier version for the two mythical British super-carriers HMS Not at All Sure We Can Afford This After All and HMS We Can Afford Either the Ship or the Plane but Not Both.

Now, the reason I was compelled to pen this blog is entirely the fault of my Dutch wife, Corine (brave woman bless her). In her infinite, supreme commander way she decided that I needed to be compelled to stop thinking quite so much about work. Having heard me drone on about the models I used to build as a kid she bought me an Airfix kit (I think you call it Revelle in Yankdom) of HMS Iron Duke (known affectionately by its crew as the Iron Duck due to a tendency to waddle), the flagship of the grandest fleet of the greatest navy ever to sail the seven seas. It sat accusingly in its box for a year or so until no longer able to bear the shame I last week took the myriad of tiny pieces out of the box and began to ‘build’ it.

Unfortunately, I had failed to tell my wife of two important failings that had slipped between the cracks of nostalgia. First, as a shipbuilder I was complete rubbish. Second, my childhood purchases were invariably models of the German battleship Bismarck which with a firework inserted inside (a ‘banger’ in English vernacular) invariably and rapidly met a watery demise in the stream outside my house. It was a happy 1970s childhood. Entirely in keeping with past efforts some hours into the project both the glue and the paint seemed to have gotten everywhere except where intended. This project was clearly going to take far longer, cost more and become a real mess. Just like the F-35 Lighting II.

To mix my metaphors the F-35 is fast flying into a tipping point. Estimated at $237.7m per F-35B and $236.8m per F-35C costs have doubled since the original estimates of its manufacturer Lockheed Martin. Moreover, the plane will not now see service until sometime “after 2016”. Last month the Japanese warned they would cancel the contract if prices inflated further and Italy cut its order by 30%. This month the Pentagon announced that it was delaying an order for 179 F-35s which surprise, surprise will push up the price further. Having made a decision in 2010 to re-design the carriers for F-35C, the potential British flip-flop back to the F-35B (which has half the range and can carry half the weapons of the F-35C) threatens to destabilize an already precarious British defense strategy. The Dutch? The savagery with which they are cutting their defense budget and the rate of climb of F-35 costs means that they will probably only be able to afford one F-35 and only if they scrap the Dutch Army and Navy.

What has gone wrong? Essentially the F-35 suffers from what is known as the 80-20 problem; expecting a system to do too much too soon given the available and untried technologies being built into it on the budgets available. This has been compounded by the savage cuts to defense budgets that have taken place in the wake of the 2008 financial crisis. Moreover, the project management of Lockheed and its government partners has left much to be desired, further complicated by American concerns about technology transfers and the shifting needs of clients. The only saving grace is that it has made Europe’s incompetent weapons-makers look positively nimble by comparison.

What to do? For the Europeans there are two options – scrap or pool. Take the British as an example. In London’s position I would reconsider F-35 not simply in terms of cost but defense strategy. It is evident that with the US shifting towards a maritime strategy and with a main aim of British defense policy to have sufficient deployable military power on call to influence Washington the two aircraft carriers are more important than the F-35 per se. In such circumstances it would make far more sense to buy a proven system off the shelf, such as the US F-18 or French Rafale, and equip them with the latest avionics and weapons systems.

By adopting such an approach the British could afford a full fifty aircraft wing for the carriers, including airborne early warning. Striking such balances is one function of sound defense strategy. Alternatively, all the European F-35 end users (Britain, Denmark, Netherlands, Norway and Turkey) could pool their respective efforts and look for economies of scale and maybe invite Australia, Canada, Israel and Japan to form a new end-users group to exert more control over the bloated US-led procurement process.

If not I suspect F-35 will suffer the same fate as my Duck – it too will probably never be completed.

Julian Lindley-French is Eisenhower Professor of Defence Strategy at the Netherlands Defence Academy, Fellow of Respublica in London, Associate Fellow of the Austrian Institute for European and Security Studies and a member of the Strategic Advisory Group of the Atlantic Council. He is also a member of the Academic Advisory Board of the NATO Defence College in Rome. This essay first appeared on his personal blog, Lindley-French’s Blog Blast..