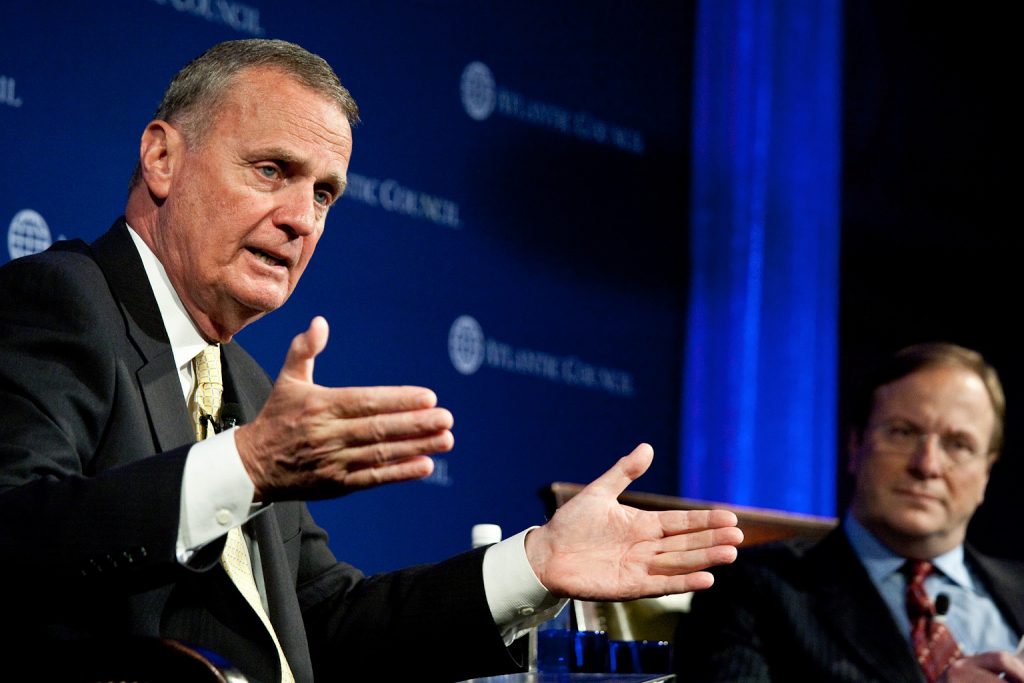 National Security Advisor Jim Jones declared in a speech to the Atlantic Council that the recent testing of a nuclear device and firing of Taepodong missiles by North Korea “are not an imminent threat” to the United States or the regions because “they have a long way to go” in perfecting the technology to weaponize their nukes.

He added, however that “The imminent threat is the proliferation of that type of technology to other countries and potentially terrorist organizations and non-state actors.”

Naturally, this bold statement, especially coming after several days of hand-wringing in the media, was not going to go unchallenged.  Blogger Rick Moran, writing at American Thinker, declares this “More Keystone Kops foreign policy from Obama.” While noting that the administration has raised our military alert level, which “makes it clear that the North Korean threat is being taken very seriously by the White House,” Moran wonders, “why go out of your way to downplay the threat by trotting out your national security advisor to state the obvious?”

Similarly, Hot Air’s Ed Morrissey wonders, “Has the Obama administration settled on a strategy of apathy? Does he think ignoring Kim will make him go away? I have to admit that no one has tried that strategy with North Korea, perhaps because no one has been crazy enough to think it will work.”

North Korea’s nuclear and missile tests are hardly good news, but they don’t justify going into full panic mode. We already knew that North Korea had a nuclear weapons capability, and though this latest test seems to have been slightly more powerful than the initial one, it doesn’t imply a qualitative shift in the strategic environment. North Korea’s defiance is annoying, perhaps, but it’s not like the act of testing a nuclear weapon tells us something new about their regime. And let’s not forget that the United States has tested a nuclear weapons 1030 times (plus another 24 joint tests with Great Britain), while Pyongyang has tested exactly twice.

After noting that both Bill Clinton and George W. Bush failed to stop the DPRK’s nuclear program because “our hands are largely tied,” Walt concludes,

So the best response is to remain calm, and stop talking as if this event is a test of Obama’s resolve or a fundamental challenge to U.S. policy.  In fact, the tests are just “business as usual” for North Korea, and it would better if the United States “under-reacts” rather than overreacts. Instead of giving Pyongyang the attention it wants, the United States should use this incident as an opportunity to build consensus among the main interested parties (China, Russia, South Korea, Japan) and let China take the lead in addressing it. Above all, the Obama administration should avoid making a lot of sweeping statements about how it will not “tolerate” a North Korean nuclear capability. The fact is that we’ve tolerated it for some time now, and since we don’t have good options for dealing with it, that’s precisely what we will continue to do.

Look, it’s frustrating to watch rogue regimes developing nuclear weapons.  After railing about an Axis of Evil and pledging repeatedly that “We have to have policies that prevent the world’s most dangerous people from having the world’s most dangerous weapons,” the Bush administration left office with the 2/3 of said Axis not under American occupation either possessing or in the final stages of developing nuclear weapons.  Indeed, Bush proclaimed Kim’s regime “evil” in late 2002, it was well on its way to a nuclear device by early 2003, and it successful tested its first one in late 2006.  It wasn’t because Bush’s team was insufficiently tough, dedicated, or competent but because being The World’s Sole Remaining SuperpowerTM comes with much less control than people think.

We don’t have to like it but Walt and Jones are right.  While the North Koreans certainly got our attention over the weekend with their provocations, they’re no more dangerous now than they were Friday afternoon.  Indeed, as noted in a previous post, by detonating a device, they’ve taken a huge chunk out of their tiny potential arsenal.   Their program came to fruition under Bush’s watch and there’s no reason to think Obama will be any more successful in ending it.  What remains, then, is to contain the damage.