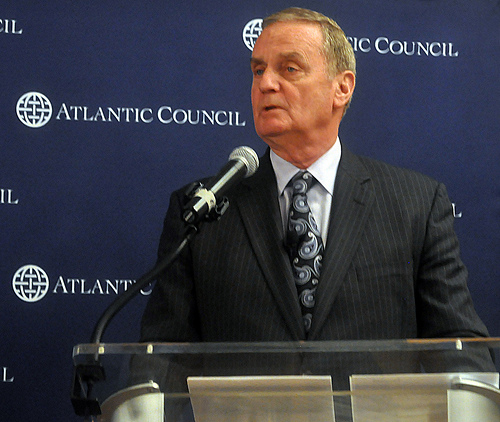 General Jim Jones, former national security advisor to President Obama, said “pivot to Asia” are probably “the words we regret most.” While there’s no question that the Asia-Pacific is more important than ever, the phrase signaled that other regions, notably Europe and Africa, were therefore less important.

Speaking at the third annual Bronislaw Geremek lecture at the Atlantic Council last night, Jones argued that a “US-European economic revival” is a critical prerequisite to achieving most of our shared goals and that it is much more likely to be achieved through transatlantic cooperation. He declared that dealing with  joblessness, entitlement spending, and debt “must be our shared agenda.” While “economic growth must be driven by the private sector,” it needs “wise public policy” to create an environment conducive to success. Given economies that make up a combined 50 percent of global GDP even in their depressed state and bilateral exchanges that account for 40 percent of all global trade, Jones urged transatlantic leaders to “think big.”

Relatedly, Jones argued that “energy security may be the greatest international security issue” facing the United States and Europe. He pointed to the good news in shale oil and gas (which dominated much of the evening’s discussion) but urged transatlantic leaders not to ignore other energy sources, including renewables, and conservation. He warned that it would be “irresponsible” to bet the future entirely on shale and urged “we must adopt a holistic approach.”

More fundamentally, the man who spent four decades leading Marines argued for a reconception of global security that went well beyond traditional military terms, prioritizing “human needs,” quality of life, and other global stability issues. He urged governments, firms, and non-government organizations to work together to “nurture developing societies” so that we might “prevent instability” rather than responding to it by deploying force once it erupts.

While this dichotomy might surprise those who haven’t followed Jones closely, the former Commandant and Supreme Allied Commander has championed the need for a comprehensive approach for years. As Bono revealed almost three years ago, when he accepted the Atlantic Council’s first Humanitarian Leadership Award, Jones called him back in his Marine days to see how he could work with the ONE campaign because he understood that Americans needed to “show the world what they were for as well as what they were against.” And that there’s a connection between misery and violence in the developing world.

But Bono also pointed to a rather fundamental issue: The US “national security strategy.  As I understand it, it’s based on the three Ds:  defense, diplomacy and development.  The last two Ds get a fraction of the government budget compared to the first.”

As Don Snow drilled into me years ago, “policy is what gets funded.” The Obama administration, under the leadership of those like Jones and former director of policy planning at the State Department Anne-Marie Slaughter, pushed hard for a heightened emphasis on soft power.  Slaughter led a Quadrennial Diplomacy and Development review, which gained enthusiastic praise from then-secretary of defense Bob Gates, calling for increased funding for USAID and other initiatives. But the reality has been a continuation of the old policy: the military is what gets funded.

Things are likely to get worse, not better, in the near future. Even if Congress and the White House manage to work out a deal to avoid the self-inflicted head wound that is the sequester, sharp cuts to defense are coming. And that money most assuredly isn’t going to be transferred to the diplomacy and development lines.