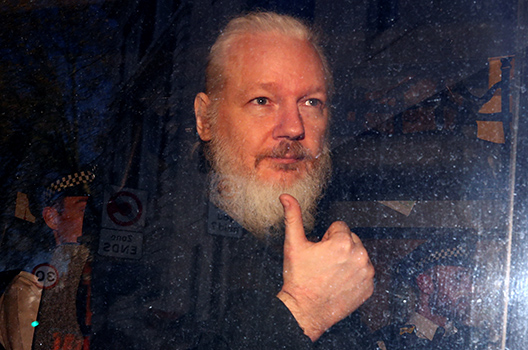 The arrest of Julian Assange in London on April 11 is a victory for the rule of law. Whatever one believes of the purported nobility of his ideology that governments and persons he does not like should be subject to information warfare under the guise of targeted “transparency,” Assange and his allies and enablers have done far more harm than good.

Individuals, businesses, and governments have the right to live within digital rules and laws.  Anything else is a crime, espionage or information warfare. Respect for protected and private information, whether it be for individuals or nations, is essential for societal function. Individuals who take it upon themselves to decide who deserves data respect and who does not are dangerous for all.  Who’s next?

Assange may have begun believing global data transparency exposes enough wrongdoing that his ends justify his means.  Wherever he began, he now stands before a magistrate as a presumed accomplice of the Russian government in undermining the integrity of the 2016 US presidential election.

Assange may have begun as one of many opposing the US intervention in Iraq and ouster of the Taliban in Afghanistan, but now stands before a magistrate charged with trying to undermine the safety of US military personnel abroad, helping expose the United States’ most sensitive signals intelligence gathering tools (but not Russia’s), and as someone believed to be working to undermine the United States’ diplomatic standing around the world. He stands before a magistrate as a probable tool and partner of Russia against the West, Europe, democracy, the rule of law, and the United States.

We are just beginning to understand how the international community convinced the government of Ecuador to withdraw its diplomatic immunity and turn Assange over to British law enforcement authorities. What we do know is that Ecuador wanted out of its 2012 decision to take Assange into its embassy in London, that multiple countries filed formal extradition requests for him to stand trial, and that the process of international law enforcement and diplomatic cooperation appears to have carried the day.  (London’s parallel response to Assange’s unilateral actions would have been to mass forces and overrun the Ecuadorean Embassy simply because it could.)

In perhaps the irony of ironies in his selective notion of when rules should apply and when they should not, Assange asserts British law enforcement is acting “unlawfully.”

The US, Swedish, and British governments are to be commended for showing patience and respect for international legal institutions over seven years.  For US law enforcement, it must have been awkward working with the White House, given Assange’s work tainting the 2016 election and US President Donald J. Trump’s professed “love” for WikiLeaks.

The actions of Assange exemplify the leveling power of individuals adept at exploiting the many crevices in our digital security. Nations are more vulnerable now than perhaps any time in modern history to individuals, relatively weak states and non-state criminal organizations having the capacity to cause strategic harm inside the homeland of other nations. Heretofore, states held aggregate power. Industry could lead in technological breakthroughs and produced ships, tanks, and planes, but governments owned and operated them and amassed the aggregate power. Governments decided when and how to apply force.  Today, individuals and technology companies are far ahead of governments in their capacity and aggregate technological prowess.  Criminals are now first adapters and technology companies are on equal footing with governments in their ability to work with or against governments in cyber security.

The New York Times reported in an insightful expose on March 21 titled “A New Age of Warfare: How Internet Mercenaries Do Battle for Authoritarian Governments” that some of the world’s best cyber warriors are legally selling their skills on the open market to commercial companies to enable relatively weak states to act as highly advanced cyber players on the world stage.  Some of these individuals inevitably will take up with persons like the next Julian Assange to make digital “exposers” even more powerful adversaries.

Whatever various national and international legal institutions determine in charges against Assange, his actions to date have been antithetical to the rule of law and the democratic system of governance. It is vital that he be afforded all the legal protections he has flouted.  The best outcome is for his admirers to conclude he had his day in court. Anything short of that will encourage some to believe the international system is rigged and his way is the only way to voice grievances.

Todd M. Rosenblum is a nonresident senior fellow in the Atlantic Council’s Scowcroft Center for Strategy and Security. Follow him on Twitter @ToddRosenblum1.