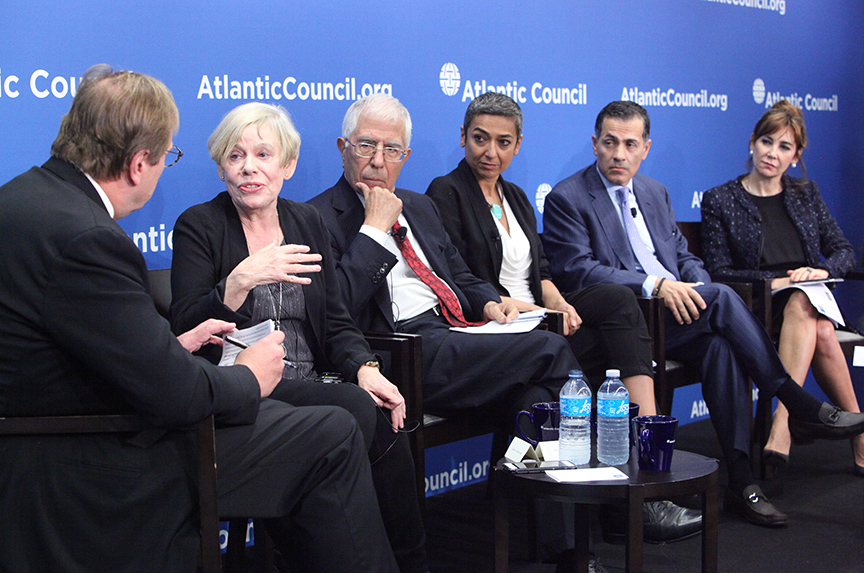 The United States and Europe have entered a “dark period” of Islamophobia, and no easy solutions are at hand, panelists contended in a discussion at the Atlantic Council in Washington on October 20.

In the wake of deadly attacks by sympathizers of the Islamic State of Iraq and al-Sham (ISIS) in Paris, Brussels, and San Bernardino, hate crimes against Muslims in the West have soared to levels last seen in the period after the terrorist attacks on the United States on September 11, 2001.

The Atlantic Council and the Aydın Doğan Foundation jointly hosted a panel discussion in Washington to discuss the challenge of Islamophobia and to seek solutions to counter the spreading sentiments. The event was convened ahead of the Smithsonian Institution’s exhibition on “The Art of the Quran,” which opens on October 22.

Vali Nasr, dean of the Johns Hopkins University’s School of Advanced International Studies, said he wasn’t optimistic about a near-term solution to Islamophobia. “We are in a dark period…It is no longer about terrorism or 9/11 or foreign policy,” he said. “We have become unwittingly entangled into some nasty forces that are going through American politics and society.”

Karen Armstrong, an author of books on comparative religion, echoed Nasr’s sentiment about a dark period and said she didn’t see a quick solution to the problem.

Nasr and Armstrong were joined in the discussion by Vuslat Doğan Sabancı, vice president of the Aydın Doğan Foundation and publisher of the Turkish daily newspaper Hürriyet; Zainab Salbi, of Zainab Salbi Project; and Mehmet Aydin, a former Turkish minister of state. Frederick Kempe, president and CEO of the Atlantic Council, moderated the discussion.

Far-right politicians have used Islamophobia to whip up public anger toward Muslim communities that have long resided in Europe as well as newly arrived migrants fleeing war zones in the Middle East and Africa.

Islamophobia is a problem not just for Muslims, but also for the United States and Europe. “Before very long, Islamophobia can change the political map of Europe as we know it,” Nasr warned. In Germany, for example, Chancellor Angela Merkel’s political party has suffered historic defeats in state elections largely due to the Islamophobic response to her welcoming Syrian migrants.

In the United States, Donald Trump, the Republican presidential nominee, last year called for “a total and complete shutdown” of all Muslims coming to America. More recently, he has said he is in favor of “extreme vetting” of Muslims.

“Muslims will have it much more difficult ultimately than Mexicans. After all, [Mexicans] are Catholic and part of the Western civilization; we are not,” Nasr, a Muslim, said, adding that Muslims don’t have a strategy to disentangle themselves from the waves of populism that are sweeping across Europe and the United States.

Salbi recounted meeting a Muslim family which has lived in France for the past four generations. A grandfather fought against the Nazis in World War 2. A son, on the other hand, has been recruited by ISIS. The son talked about the discrimination and bullying he faced growing up in France. “He said, ‘What’s the point? No matter what I do, how much I try to prove that I am French, they are never accepting me for who I am,’” said Salbi. “These actions… they have a reaction,” she added referring to the atmosphere of discrimination faced by immigrant communities.

Doğan Sabancı, who delivered opening remarks at the event and later participated in the panel discussion, said it is unfortunate that groups such as ISIS invoke Islam to justify their acts of terrorism. Muslims, she noted, are the biggest victims of ISIS.

The rise of Islamophobia in the West has fueled anti-Western sentiments in Muslim-majority countries and serves as a propaganda tool for ISIS, said Doğan Sabancı. “Both diseases are feeding each other and causing a bigger and bigger problem for the world,” she added.

Doğan Sabancı advocated greater engagement and dialogue between communities to create an awareness about the other and seek solutions to Islamophobia. The media can play a constructive role by facilitating a conversation that respects freedom of thought and speech, but also human dignity and faith.

Muslim women, especially those who wear headscarves, are a conspicuous target for hate crimes. In London, a woman in a headscarf was attacked by a man while she was walking in a busy shopping district on October 4.

“In the Western world, the ones who are suffering the most, in my opinion, are women who are wearing headscarves because they are physically different,” said Salbi.

“People assume Muslim women [in headscarves] are oppressed,” she said, “but what they are doing is oppressing these very women by prejudice and acts of violence.”

In France, this past summer, a number of cities imposed a ban on burkinis—the modest body-concealing swimsuit chosen by some Muslim women. In one highly publicized instance, police officers forced a woman to remove her burkini in front of fellow beach goers. A court in Nice later suspended the burkini ban.

Besides hijab-clad women, mosques, too, are targets of hate crimes.

Acknowledging a rise in attacks on mosques in the United States, Salbi said Muslim communities can help by, for example, demystifying what happens in these places of worship. Radicalization occurs not in the private confines of a mosque, but in the public spaces of the Internet, she said.

“Muslims need to co-own this issue. It is not about us and them,” Salbi said. “We can’t say, ‘I am a secular Muslim. I have nothing to do with it.’”

Nasr, however, found it offensive that the onus is being put on Muslim leaders to speak out against radicalism. He found it “particularly offensive” when Trump declared in a recent presidential debate that the burden of finding out who is planting a bomb rests on Muslims.

“This is essentially collective guilt… and the burden is on [Muslims] to prove themselves innocent,” he said.

Muslims, he added, are unique as immigrant communities in the West because “we are not in control of those who interpret our faith; they are sitting in Cairo and in Riyadh and they have different worldviews and different priorities.”

Salbi emphasized the importance of looking at Muslims not as a monolithic group but as a diverse community.

Aydin, meanwhile, suggested that there is a need for intercultural education and a respect for others’ values and cultures.

The rise of Islamophobia

Islamophobia “burst on the stage” after September 11, 2001, as a policy devised and promoted at the top echelons of the George W. Bush administration to manage Washington’s relationships in the Middle East, said Nasr.

He said the Bush administration used this policy to sidestep an introspective examination of US foreign policy, which was being blamed in the Muslim world for the attacks in 2001. “Islamophobia was a way of passing the blame back to the Muslims, put Islam itself on trial for its responsibility in promoting terrorism rather than put US foreign policy on trial for creating some of the problems,” he added.

Islamophobia quickly found traction in the evangelical community in the United States. “They have a very clear sense of ‘Islam is the enemy,’” said Nasr.

Nasr contended that US President Barack Obama signaled a break with this policy of Islamophobia in a speech in Cairo on June 4, 2009, that was seen as an effort to build bridges with the Muslim world.

Muslims in the West, Nasr said, pose a challenge when it comes to their numbers—which are growing—and assimilation into the larger community—which they don’t do. “The challenge for Muslims is now much, much bigger,” said Nasr. “It’s about defending their place in American society or European society going forward.”

Image: From left: Frederick Kempe, president and CEO of the Atlantic Council, moderated a discussion on the challenge of Islamophobia with Karen Armstrong, an author of books on comparative religion; Mehmet Aydin, a former Turkish minister of state; Zainab Salbi, host of Zainab Salbi Project; Vali Nasr, dean of the Johns Hopkins University’s School of Advanced International Studies; and Vuslat Doğan Sabancı, vice president of the Aydın Doğan Foundation and publisher of the Turkish daily newspaper Hürriyet at the Atlantic Council in Washington on October 20. (Atlantic Council/Victoria Langton)