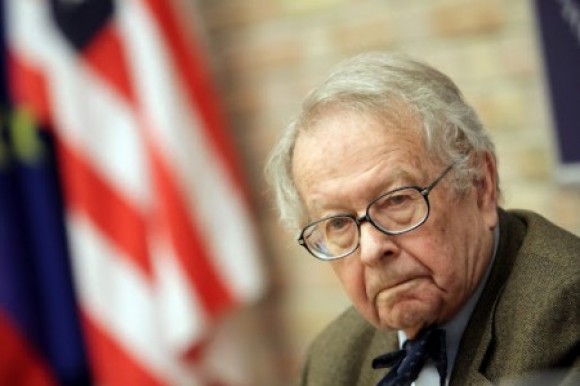 Kenneth Waltz, the most important Realist theorist of the last half-century, died Monday, a few weeks before his 89th birthday.

His Columbia University doctoral dissertation was published in 1959 as Man, the State, and War. He followed up with Theory of International Politics in 1979. Georgetown professor of government Daniel Nexon doesn’t exaggerate when he says those two books “provided the framework within, and against, international-relations scholars have argued for much of the post-WWII period.” Indeed, some concepts Waltz introduced are quite literally part of the Day 1 lecture in any course on world politics.

The Classical Realists, of whom Hans Morgenthau was the most influential modern theorist, argued that the relations between states were an extension of the men who ran them and the fixed laws of human nature, with the pursuit of power and survival the key components.

Waltz argued for a Structural Realism in which individuals leaders and nations were important actors but international relations were more than a sum of the foreign policies of states. Rather, there was a dynamic international system in which both states and their leaders operated, which both constrained some actions and forced their hand in others. Whereas states are hierarchical systems domestically, with various actors having assigned roles and powers, internationally they existed in a state of anarchy. Because states are sovereign, no entity exists above the state to impose rules on them in the way that police forces and court systems do domestically. This creates a “self-help” environment in which states and those who lead them are ultimately constrained in pursuing their interest only by their own power and the power of other states, which may have competing interests.

This seems quite obvious today but it is precisely because Waltz explained the concept so thoroughly that even his many critics acknowledge much of his framework as a baseline.

While primarily a scholar of international relations and not foreign policy, Waltz nonetheless weighed in with some frequency on the debates of the day. He was a fierce and early critic of the Vietnam War and later opposed the 2003 invasion of Iraq. He generally opposed military adventurism, large standing armies, and an ideology-based foreign policy. Waltz continued to contribute to the conversation to the end, arguing against going to war to stop Iran from becoming a nuclear power.

Waltz’s 1980 Adelphi Papers essay, “The Spread of Nuclear Weapons: More May be Better,” breathed new life into what had been a stale debate on nuclear proliferation. Arguing that nuclear weapons had been a force for peace during the Cold War because they “make the cost of war seem frighteningly high and thus discourage states from starting any wars that might lead to the use of such weapons.” His case shows Structural Realism in action:

States coexist in a condition of anarchy. Self-help is the principle of action in an anarchic order, and the most important way in which states must help themselves is by providing for their own security. Therefore, in weighing the chances for peace, the first questions to ask are questions about the ends for which states use force and about the strategies and weapons they employ. The chances of peace rise if states can achieve their most important ends without actively using force. War becomes less likely as the costs of war rise in relation to possible gains.

Waltz outlined in great detail why nuclear states would be better able to deter attacks by increasing their costs. He argued that states are unlikely to take great risks for minor gains, that a deterrent-based strategy eliminates the need of wars of conquest to create buffer zones, and that being a known nuclear-weapons possessor sends a certain signal to potential attackers that makes underestimation less likely:

Countries armed with conventional weapons go to war knowing that even in defeat their suffering will be limited. Calculations about nuclear war are differently made. Nuclear worlds call for and encourage a different kind of reasoning. If countries armed with nuclear weapons go to war, they do so knowing that their suffering may be unlimited. Of course, it also may not be. But that is not the kind of uncertainty that encourages anyone to use force. In a conventional world, one is uncertain about winning or losing. In a nuclear world, one is uncertain about surviving or being annihilated.

Critics argue, not unreasonably, that the risks of being wrong in following Waltz’s advice are high. It’s true that, in their almost seventy-year history, atomic weapons have only been used twice—both times by the United States against Japan during a time when no other power possessed the technology. Even in the case of very high-tension bilaterals—U.S.-USSR, USSR-China, USSR-China, and India-Pakistan—there have been no nuclear escalations. But, of course, the fact that it hasn’t happened doesn’t mean that it couldn’t.

Waltz’s provocative July/August 2012 Foreign Affairs essay “Why Iran Should Get the Bomb” continued the conversation he started three decades earlier, and sparked a hot debate all over again. He argued that “the danger of a nuclear Iran has been grossly exaggerated” because “the debate surrounding it has been distorted by misplaced worries and fundamental misunderstandings of how states generally behave in the international system.” He effectively rebuts the notion that the Iranian regime is irrational, citing several examples where it changed course to avoid conflict, and argued that “it is far more likely that if Iran desires nuclear weapons, it is for the purpose of providing for its own security, not to improve its offensive capabilities (or destroy itself).” Responding to the fear that Iran would hand nuclear weapons to terrorists, Waltz reasoned, “building a bomb is costly and dangerous. It would make little sense to transfer the product of that investment to parties that cannot be trusted or managed. ” He was back in the following issue debating Colin Kahl, artfully rebutting several lines of argument against his position.

Waltz’s version of Realism is likely to remain a major touchstone in the academic study of international relations for many more decades. One can only hope that it regains currency among those who make U.S. foreign policy as well.

James Joyner is managing editor of the Atlantic Council. This essay was first published in The National Interest.
This website or its third-party tools use cookies, which are necessary for its functioning and required to achieve the purposes illustrated in the cookie policy.