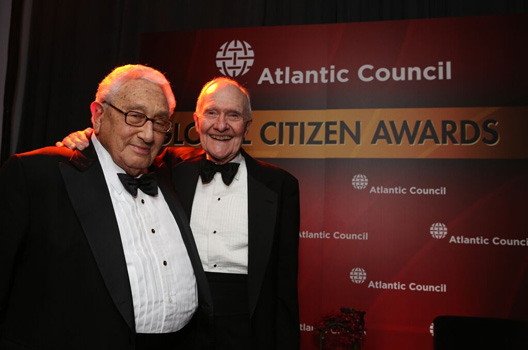 It is a great privilege to be here. To be introduced by Brent Scowcroft. He and I were colleagues forty years ago. And it is dangerous to bring us together because we are like two veterans of the thirty years war who keep telling each other stories of our great adventures and the dramatic times through which we lived. And it was a dramatic time.

Brent, of course, went on to be security advisor to President [George H.W.] Bush and to be one of our great national assets to whom one could always turn in times of crisis. He was kind enough to mention that at one period I was both National Security Advisor and Secretary of State. It was a unique period in American history because never before and never since have relations between the State Department and the White House been as good as they were then.

It is… If we want to reflect about the challenges of our time we can begin by comparing the situation of that period with the world today. Of course, there is some nostalgia for the Cold War when dividing lines were clear and all we had to worry about was the extermination of humanity in the nuclear war. But in those days borders were relatively well defined. Conflicts were between states. And the complexities of the modern period had not yet appeared. In the present world, the challenge is not disagreements between states, although they still exist, but the emergence of non-government areas.

We have in the Middle East today four countries whose governments are not able to control the territory defined by international law. [That] would be Libya, Syria, Iraq, and Yemen. In those conditions non-state organizations appear that can reach beyond their geographic locality, but that are not governed by any principle of international law. In fact, many of them pride themselves on a flagrant violation of what the world considers international law. What makes it even more complex is that there are countries that act both as state and as non-state actors. On the one hand, they claim the participation in the United Nations, the attributes of sovereignty, and the general principles of international conduct. On the other, they support non-state organizations that undermine these principles in the various countries.

And so we have not only the phenomenon of state against non-state organizations, but of schizophrenic political units that act as both states and non-state organizations. And when one looks at the kaleidoscope that emerges there sometimes it used to be said, “The enemy of my enemy is my friend.” In the Middle East today, it is perfectly possible that the enemy of our enemy is also an enemy.

And then, so, the challenge is how one can distill a country of borders out of this complexity. And, of course, the Middle East is not the only unsettled area in the world. The emergence of China, of India, will change the distribution of power in reflecting about international order. So that is a big challenge of our time.

When I first became involved in international affairs, the challenge seemed to be how can one prevent a military aggression across a well-defined line in the center of Europe? And in those days, the recovery of Europe and the cooperation with America was considered sufficient to achieve that objective. Since then, Europe has developed in a way that would have been unimaginable forty years ago. Many countries in the whole region have recovered a great degree of economic vitality. And also the problem of sovereignty and the conflict between countries within Europe has been substantially overcome in a number of important institutions some of whose representatives will be honored tonight. But there has been a gap between the economic evolution of Europe and the political evolution of Europe. That the unity of Europe that has been achieved in the economic field has not been matched by a parallel development of either the concept or the willingness to develop a political objective. And, at the same time, the United States, which was dominant in the immediate post-war period, and which could operate on the principle that many of the problems in Europe were solubleby American economic and political cooperation, now also has to face the issue of its involvement all over the world.

I say all of this not because I will give you an answer, so don’t be terrified that you will be delayed for very long from your dinner, but to point out that the Atlantic relationship that was initially developed primarily on military and strategic lines now really has to be extended into a conceptual question. What are we trying to achieve? What are we trying to prevent? And what sacrifices are we willing to make? Because great things cannot be achieved without some sacrifice of the present for the needs of the future. And when we look today at the challenges of immigration, for example, which bring with it humanitarian needs, but also some reflections of about the nature of what is going to become of this civilization that had evolved in Europe and how it can be combined with the influx that it faces, and how the conditions can be prevented from which this influx arises, we have one of the examples of the challenges, but also the opportunity of our time. I say this in order to underline, while the Atlantic Council remains as important and with the need of even more dynamism than when it was originally founded.

I’ve been told that part of this award is because I’m the longest-serving member of the Atlantic Council board. It is terrific to get an award for longevity. You can only improve on it. So I hope to be back here in future years when we begin working on the answers to some of these questions.

Thank you very much. It is a great honor.