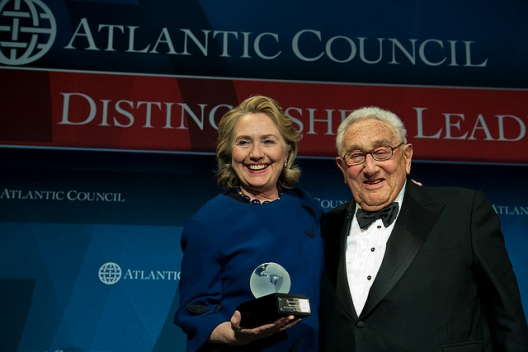 In a night filled with sober speeches on international security and economic issues, Henry Kissinger provided some levity concerning the rumored presidential aspirations one of the night’s awardees, Hillary Clinton.

Introducing Clinton at the Atlantic Council awards dinner, Kissinger, who served as secretary of state under presidents Nixon and Ford, talked about the transition to civilian life that Clinton now faces. “I know those are difficult times,” Kissinger intoned, “When your hand twitches to reach a telephone to give some order.” Pausing for effect, he added, “When you want to tell someone they didn’t get it quite right.”

He says his own recovery was aided when he “suddenly realized” that “at least four secretaries of state became president.” That insight “sort of started focusing my mind even though there was a constitutional provision that prevented me from doing it.” He added, “I thought up all kinds of schemes to get around that.”

So, Kissinger joked, “I want to tell Hillary that when she misses the office, when she looks at the histories of secretaries of state, there might be hope for a fulfilling life afterwards.”

When Clinton took the stage, she responded, “When I became secretary of state, I spent a lot of time thinking about my illustrious predecessors — not primarily the ones who went on to become president, but about the extraordinary generation of those leaders who were not just present at the creation but leading the creation of a liberal global order that provided unprecedented peace and prosperity along with progress on behalf of the values that we hold in common.”

Time will tell whether Clinton will make another run for the White House. But, yes, there is some history of America’s top diplomats becoming president. Indeed, there have been six of them—Thomas Jefferson, James Madison, James Monroe, John Quincy Adams, Martin Van Buren and James Buchanan.  Of course, it might give Kissinger some consolation that the last of those left the job in 1849 before being elected president in 1857. It has not exactly been a popular path to the Oval Office in modern times.