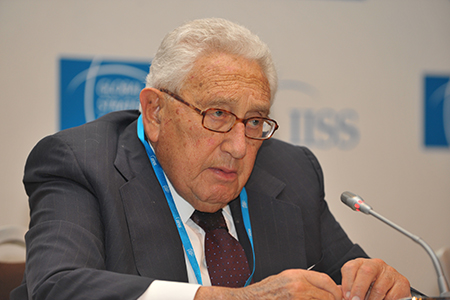 The other day in Geneva, former US Secretary of State Henry Kissinger delivered the keynote address of the annual meeting of the International Institute of Strategic Studies. His topic was the present and future state of world order – not an unfamiliar topic to him or to his audience.

But those expecting a bold tour d’horizon were perhaps taken somewhat by surprise. His address was wistful, ambivalent, foreboding.

Long ago, Kissinger made his reputation as a foreign policy “realist” whose worldview rested upon the articulate and confident combination of strategic truths with tactical legerdemain.

This address flipped that combination on its head. It called into question the basis for world order in the near future. Kissinger wondered why it is proving so elusive.

He cited the explanation popular among realists since the 1980s: the West is in decline; power is shifting to Asia; yet Asia sees the world differently, or at least differently from the way the West does today, but not so differently from the way the Europeans saw the world in the mid-late 19th century. Thus, Asia rises as a train of rivalrous nation-states and quasi-empires while Europe, and perhaps someday the United States, fall as geriatric former great powers. Collective security so appears as a luxury—or as a necessity—of decline.

Kissinger sounded unwilling to accept so deterministic a view, at least with regard to the future. There are still choices. Yet he also dismissed the optimism that sees in today’s Asia the kernel of something like a regional security community, similar in spirit but different in scope to what was built in Europe in the latter 20th century. The world is too messy and interconnected for suchregionalism to work.

As an alternative, Kissinger suggested a modest, “functional” approach to problems that lies somewhere between regionalism and globalism. Belgium in 1830, he said, provides one model, Afghanistan today potentially another.

He might also have included the Atlantic community. Its early boosters generally promoted it as something more than just a regional power bloc, namely, as an organic, open society that would someday acquire an important global dimension. This is what happened, or at least appeared to be happening, in the 1990s.

Perhaps it happened with too much zeal and the ‘90s will come to be seen as a lost decade. A new world order may yet emerge, but more as the result of a rupture than a continuity. Kissinger suggested as much in pointing to the relative weakness of the United States and its allies today. That was not the case a decade ago.

But he said little about the future of the Atlantic relationship beyond calling it “essential.” Maybe he has nearly given up on the West; but he has not exactly embraced the East in its place. He would seem to be in geopolitical purgatory; and his emphasis in the speech on cultural forces would give rise to the suspicion that his overriding faith in statecraft of the traditional sort has ebbed.

The suspicion is probably false; but where faith is lacking, imagination really does become essential.

Kenneth Weisbrode is a historian at the European University Institute and author of "The Atlantic Century."