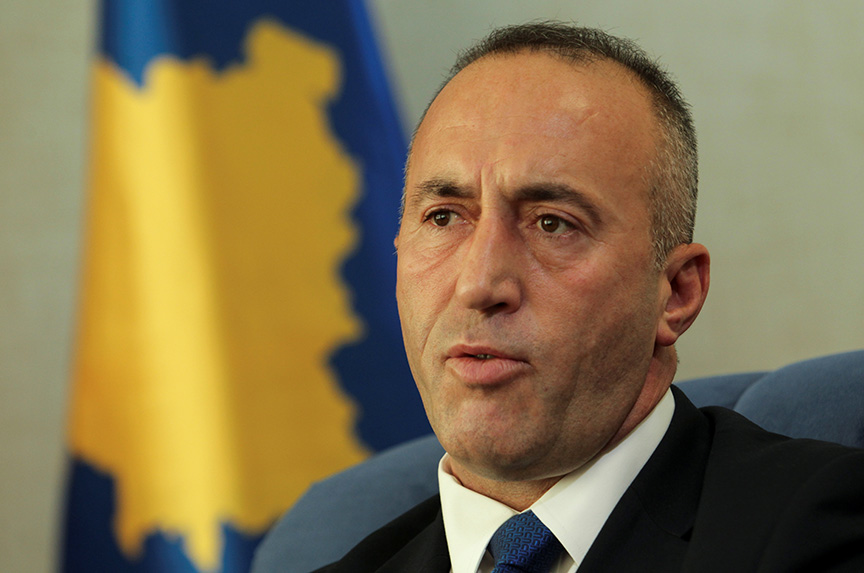 Kosovo’s prime minister, Ramush Haradinaj, says a land-swap plan floated by the presidents of his own country and Serbia is a dangerous idea that undermines Kosovo’s aspirations of NATO and European Union (EU) membership.

Haradinaj also anticipates Russia will meddle in this sensitive issue—just as was the case in 2016, when Russia reportedly attempted to assassinate the prime minister of Montenegro and overthrow the government.

Serbian President Aleksandar Vucic and President Hashim Thaçi of Kosovo are considering a plan that supporters say will ease ethnic tensions and contribute to stability in the Western Balkans. If the plan brings about a lasting settlement between Belgrade and Pristina, it could lead to EU membership for both in the longer term.

In an interview with the New Atlanticist in Washington on September 28, Haradinaj insisted that the land-swap proposal does not advance Kosovo’s prospects of EU membership. “The formula of swaps of territories or moving borders is not a ticket to [EU membership]. It is only a delay,” Haradinaj said.

“Just the fact of this rhetoric [about land swaps] has created an environment that is hostile to a solution,” he contended, adding, “As soon as this debate on border movement, or correction as they call it, stops then we can sit at the table for a rational solution between us.”

Serbia’s own aspirations to join the EU have been held back by its refusal to recognize Kosovo. Belgrade believes a territorial agreement would benefit Serbia’s prospects for accession to the EU while proponents of the plan in Kosovo view it as an opportunity to garner international recognition that would allow Kosovo to join the United Nations and pave the road to EU accession.

According to reports, under the land-swap plan, Serbia’s Preševo Valley, where ethnic Albanians are in the majority, could be handed over to Kosovo in exchange for Kosovo’s northern part of Mitrovica, which borders Serbia and has a population dominated by ethnic Serbs. Ethnic Albanians in Mitrovica and ethnic Serbs in Preševo Valley—whose fate hangs in the balance—are opposed to the idea.

Haradinaj explained that while he is opposed to the idea of land swaps, he supports “Kosovo’s commitment to dialogue and all the efforts being made by our president for a solution.”

“The opposition to this [land-swap plan] is an opposition to tragedies. As a rational human being I would prefer living in peace and not bringing back the tragedies of the past,” he added.

In 1999, NATO intervened to stop the escalation of violence led by former Serbian strongman Slobodan Milosevic against the ethnic Albanian population in Kosovo. NATO still has more than 4,000 NATO troops deployed in Kosovo.

Haradinaj was a regional commander of the Kosovo Liberation Army in the 1990s. He was twice tried and acquitted on all charges—in 2008 and 2012—by the International Tribunal for former Yugoslavia (ICTY) for war crimes and crimes against humanity for his alleged role in the torture of ethnic Serbs during the Kosovo War.

Haradinaj, who has served as prime minister since September 9, 2017, leads the ruling PANA coalition, which includes his party the Alliance for the Future of Kosovo (AAK). Kosovo’s president, Thaçi, is a member of the Democratic Party of Kosovo (PDK), which is also part of the PANA coalition.

Haradinaj is worried that what Thaçi refers to as a “border adjustment” could prompt nationalists across Europe to make similar demands.

“Opening up this question will open the past,” Haradinaj warned.

The United States and the EU have long opposed the idea of land swaps to resolve the dispute between Kosovo and Serbia. German Chancellor Angela Merkel recently said “the territorial integrity of the states of the Western Balkans has been established and is inviolable.”

However, that position may be shifting—at least in Washington.

US National Security Advisor John Bolton said in August that the United States would not oppose a land-swap deal provided it was a “mutually satisfactory settlement” between Pristina and Belgrade.

“Our policy, the US policy, is that if the two parties can work it out between themselves and reach agreement, we don’t exclude territorial adjustments. It’s really not for us to say,” Bolton said.

“We would not stand in the way, and I don’t think anybody in Europe would stand in the way if the two parties to the dispute reached a mutually satisfactory settlement,” he added.

In his meetings in Washington, Haradinaj said, he has conveyed his strong opposition to the land swaps.

Kosovo’s prime minister, Ramush Haradinaj, spoke in an interview with the New Atlanticist’s Ashish Kumar Sen. Here are excerpts from our interview. These excerpts have been edited for clarity.

Q: You believe changing the borders of Kosovo and Serbia is a dangerous idea, but there appears to be a shift in the US opposition to the idea of land swaps. Are you worried by this change in tone? What message do you have for Washington?

Haradinaj: We need a solution—a legal binding agreement between us and Serbia—on recognition. We are committed to dialogue and a solution. The swap of territories or change of borders is not a ticket to that solution, it is a setback. It is a call for the tragedies of the past. Our region is sensitive when it comes to territories and borders. I am against [land swaps] because it is a way to call back the past. I have stressed that with every partner that I have had a chance to talk with here in Washington.

Q: How do you achieve a lasting settlement between Kosovo and Serbia that does not involve land swaps?

Haradinaj: We have a lot of interest to work together on the economy. Recognition [of Kosovo by Serbia] will open the door for partnering between ourselves and also to a longstanding peace. The wounds of the past are still present. A peace treaty between us and Serbia will really open not only the gate to the EU, but also to the stability of our region.

Q: But would an approach that deals solely with economic integration be enough to satisfy Serbia?

Haradinaj: Peace is important. Forgiveness is a key achievement. It would open the gate for the economy and exchanges that would increase the prosperity of our region.

Q: What would be the implications of a land-swap deal for Kosovo and the region as a whole?

Haradinaj: Our region is [the] home of many nations. Some of [us] are spread in different countries today. Like Albanians, we live in many [countries]—Albania, Kosovo, Macedonia, Serbia, Montenegro. This is also the case with many others. Opening up this question will open up the past. When leaders in the past, during the Yugoslav Wars, sat together to find solutions that involved moving borders they opened this issue, but couldn’t close it and people died. This is [what] the consequence of this [land-swap] formula will be.

Q: President Thaçi is committed to the idea of land swaps. Are there any conditions under which you would drop your opposition to this plan?

Haradinaj: I am opposing this plan in the same time that I support Kosovo’s commitment to dialogue and all the efforts being made by our president for a solution. I oppose this [land-swap formula] strongly and I am not the only one. There is strong opposition in our society as well as in our region.

The opposition to this [land-swap plan] is an opposition to tragedies. As a rational human being, I would prefer living in peace and not bringing back the tragedies of the past.

Q: What are the potential consequences if the EU-backed negotiations produce no deal between Serbia and Kosovo?

Haradinaj: Only EU is not enough for a solution. The United States’ role is important, and actually capitals’ involvement, including other capitals in Europe, [as well]. We welcome the support for a solution. We are seriously committed to a peaceful solution with Serbia, which would include living in peace in our region.

Q: Do you believe a land-swap agreement will bring about any change in Serbia’s attitude toward Kosovo in particular and the region in general?

Haradinaj: We doubt the formula of land swaps. It is not well analyzed and studied. It is only the idea of a few. Anybody who is rational will realize that this is not good for nobody—not for Serbia, not for Kosovo, not for anybody in the region.

Q: You have described the land swap idea as an unnecessary gamble created by Serbia and its backer, Russia. What do you believe is their motivation?

Haradinaj: We saw the efforts of Russia to undermine the efforts of all of us toward the EU and NATO. We saw the efforts made [by Russia] since the Montenegro referendum. We have strong reasons to be suspicious that they are anticipating [such meddling] against Kosovo. Once Macedonia joins NATO, then we are in line for NATO membership. [Russia] strongly opposed [NATO membership] for everybody in our region. They are heavily invested in Serbia as well.

Q: Doesn’t a normalization of relations between Serbia and Kosovo give both countries a better shot at joining the EU?

Haradinaj: Yes, that’s why we are strongly interested. However, the formula of swaps of territories or moving borders is not a ticket to that. It is only a delay. Just the fact of this rhetoric has created an environment that is hostile to a solution. As soon as this debate on border movement, or correction as they call it, stops then we can sit at the table for a rational solution between us.

Q: What do you say to supporters of a land-swap deal who see it as a “peaceful form of ethnic cleansing” that will resolve longstanding differences between Kosovo and Serbia?

Haradinaj: All of us have to live in peace in our region. We don’t deserve to be experimented with after the tragedies of the past wars of the nineties. Please don’t threaten our stability.

Image: “The formula of swaps of territories or moving borders is not a ticket to [EU membership],” Kosovo's prime minister, Ramush Haradinaj, told the New Atlanticist on September 28. The presidents of Kosovo and Serbia have floated the idea of land swaps in exchange for Serbia’s recognition of Kosovo. (Reuters/Hazir Reka)