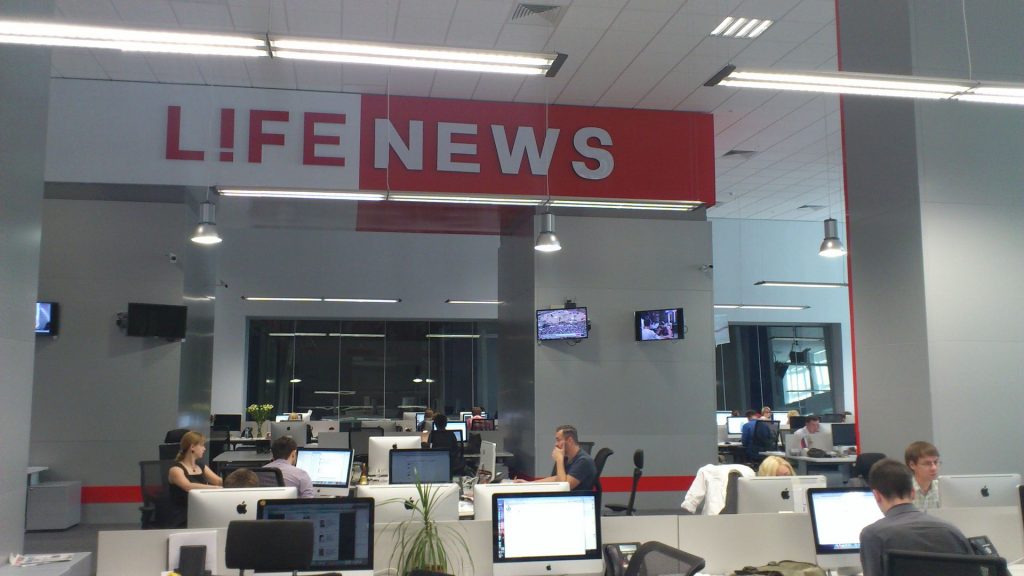 An essential asset in the Kremlin’s not-quite-covert sponsorship of the secessionist warfare in southeast Ukraine has been its ability to use Russia’s mass media to shape the story for populations at home in Russia and in much of the former Soviet Union. President Vladimir Putin signaled the importance of this propaganda war this week in decorating journalists of two government-controlled TV channels with the Russian state’s Order of Courage medal – the latest of more than 300 Russian journalists he has decorated for their coverage of Ukraine, most of them in secret.

Some of the Kremlin’s argument on Ukraine is a matter of long geo-political debate and negotiation, notably over the proper role of NATO as an institution for arranging the security of Europe. But much of it is plain myth-making that the Kremlin has needed to sustain political support at home and build acceptance among its neighbors for Russia’s attacks on Ukraine. This mythology, of course, describes Kyiv’s pro-democratic, pro-European Maidan movement as a rampage by fascist mobs that overthrew Ukraine’s President Viktor Yanukovych in February, and brutally killed and tortured ethnic Russians throughout Ukraine. Putin has used this story as the main justification for Russia’s military seizure of Crimea and its threat to invade mainland Ukraine.

On May 28, Putin’s office issued Ukaz (Presidential Order) No. 365, presenting the Order of Courage, a stylized silver cross hanging on a crimson ribbon, to three journalists “for courage and bravery exhibited in the performance of their professional duty”. On April 22, Putin gave various state decorations, including one “For Service to the Fatherland,” to more than 300 journalists for their courage in providing “objective reporting of the events in Crimea,” according to the Russian business newspaper Vedomosti. The awards handed out by Putin can include significant cash and perks – some of them boosting their holders’ state pension earnings by three to four times.

While about ninety of the 300 were correspondents, many were the CEO’s, directors or top editors – and others were middle-ranking engineers, editors and producers – at state-controlled news organs such as the NTV, Russia Today, and Life News TV channels, and the newspaper Komsomolskaya Pravda. One awardee was Russia Today chief editor Margarita Simonyan, who has generated controversy over her network’s pro-Kremlin coverage of the conflict. (As tensions between the separatist militants and Ukrainian armed forces escalated in Ukraine in late April, she drew attention by tweeting a message saying simply: “Ukraine R.I.P.”)

While eager to award its journalists, the Kremlin did so secretly, leaving Ukaz No. 269 unpublished. The Russian presidential website page that lists Putin’s decrees simply skips from No. 268 to No. 270, and Putin’s press office told Vedomosti only that Ukaz No. 269 “is not within public access.”

The three journalists decorated this week were decorated publicly, perhaps because the case for their heroism could be made more plausibly. Fedor Zavailenkov, a reporter for Russia Today was wounded this month during fighting between Ukrainian forces and separatist militias.

The two other awardees – Marat Saychenko and Oleg Sidiakin – have the more interesting tale, having been arrested among separatist fighters in eastern Ukraine by Ukrainian National Guard troops who reported finding a rocket-propelled grenade launcher in the trunk of their car. Ukraine’s Defense Ministry posted a YouTube video showing parts of the men’s detention, including the shoulder-fired weapon – capable of stopping a tank or destroying a helicopter. The journalists denied carrying the weapon, saying it had been planted in their car.

The men told the Security Service of Ukraine (SBU by its Ukrainian officials) that they had entered Ukraine not as journalists, but telling border officials they were coming to attend a concert. According to statements by Saychenko and SBU spokesperson Marina Ostapenko, the men effectively embedded themselves with the Russian-led militias fighting Ukrainian forces in Donetsk province, and filed reports affirming the Kremlin’s description of the conflict as a terrorist campaign by Ukraine’s government against its people.

The SBU charged the men with aiding terrorists before releasing them at the request of the Organization for Security and Cooperation in Europe (OSCE) and UN officials, Ostapenko said.

And they were given special attention by Ramzan Kadyrov, who has served as the Kremlin-allied leader in Chechnya since leading pro-Russian fighters there in the war against Chechen separatist guerrillas. Kadyrov told told Life News and Izvestiya that he had obtained Ukraine’s release of the men (incorrect, according to Ukrainian spokesperson Ostapenko). And upon their return to Russia, the men flew to Chechnya to be feted by Kadyrov – who is a fellow awardee of the Order of Courage.