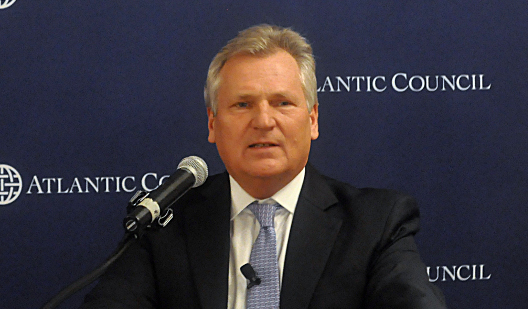 Former Polish President Aleksander Kwaśniewski declared Ukraine must choose between the West and Russia–and urged the United States and Europe to work to nudge them in our direction.

Speaking at the third annual Bronislaw Geremek lecture at the Atlantic Council last night, Kwaśniewski declared that “the European Union will survive” and that the United States has “a strong partner in Europe.” To fulfill that promise, however, requires more than solving the Eurozone crisis and otherwise getting Europe’s economic house in order. He called for “deeper integration” and “more common policies.” At the end of the day, Kwaśniewski believes, the solution is “more Europe, not less.”

Beyond consolidating the reach of Brussels for existing EU members, he said Europe must “open doors for new partners.” He singled out Turkey and Ukraine in particular. Not surprisingly, given the shared history of Soviet domination, most of the attention in the address went to the latter.

Kwaśniewski, who has since 2008 been chairman of the European Council on Tolerance and Reconciliation, argued that too many misperceive Ukraine as a Russian puppet, when it “is truly sovereign and has its own identity and ambitions.” At the same time, however, he declared that Ukraine’s courts and “quality of law” are “closer to Soviet than European style.” He pointed in particular to the practice of “selective justice” applied to opposition politicians, most notably former Prime Minister Yulia Tymoshenko.

Still, he notes there has been “gradual progress” on economic and legal reforms, including strengthening the role of barristers in court proceedings. He was also encouraged by the dialogue earlier this week as part of the EU-Ukraine summit. Kwaśniewski pointed to a review scheduled for May, and implied that it would be very helpful to Ukraine’s case if some tangible progress was made on the selective justice question by then.

While facing demands from the West for reform—not only from EU members as a prerequisite for membership but also from the International Monetary Fund as a condition for badly needed loan guarantees—Ukraine is also being courted heavily by Russia to join a Eurasian Union. Kwaśniewski argued that it would be bad news, indeed, if Ukraine chose that path.

Despite lapses under the present government, Kwaśniewski noted recent polling showed that 55 or 56 percent of Ukrainians want to be part of the West, contrasted with only 35 percent who want to follow the Russian orbit. He argued that the EU, IMF, and United States should all work to entice the nation’s leadership to follow the popular will.

It’s more than a bit optimistic, as Kwaśniewski acknowledged during Q&A, to think President Viktor Yanukovych is going to radically reverse his policies, much less in the next two months. He held on to power in the November elections by jailing opposition leaders and other practices that the OSCE termed a reversal of democracy. That Ukraine and its people would be better off following the path of Poland, the exemplar of transition from Communism to democracy, is indisputable. But Yanukovych would likely switch places with Tymoshenko in that event; he surely knows that.