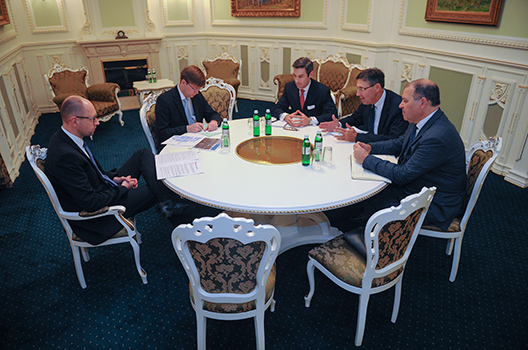 This Week Was the Deadline for the Kremlin to Halt Its Proxy Attacks on Ukraine – or Face Sanctions. It Has Done Neither.

It has been barely five weeks since tens of millions of Ukrainians achieved a major victory for themselves and for Europe with a democratic election that marginalized extremists and delivered the most nationally unified vote in the country’s two decades of independence. Given that singular accomplishment, a visitor to Kyiv might expect to find a sense of patriotic, public optimism lingering in the air – an emotion to match the blue-sky sunshine that glistens from the golden cupolas of Kyiv’s Orthodox churches.

Patriotism, yes. As I landed in Kyiv with colleagues this week, our first stop at a traffic light near the airport included a young boy who approached our car offering blue and yellow Ukrainian flags for purchase. Amid Russia’s ongoing attacks on Ukraine via the proxy of often brutal militias in the southeast, Ukrainian national pride sells easily, it seems.

But the optimism from the Ukrainians’ democratic achievement has faded with troubling speed, and for an equally troubling reason. The most basic international support they need – a clear message and firm pressure from the West that the Kremlin’s attacks on Ukraine must stop – vanished this week, just when it instead should have begun taking real effect. For weeks, President Barack Obama and European leaders have publicly warned Moscow to rein in its proxy fighters and halt the flow of weapons across its border by this week or face a far tougher set of sanctions than the West has imposed so far.

Yet as the deadline passed this week, the West has announced no sanctions, and European leaders are applying their pressures not against Moscow, but against the struggling, new government here in Kyiv.

I returned to Ukraine this week, eight years after ending my time here as the US ambassador. With the Atlantic Council’s Damon Wilson and Adrian Karatnycky, I’ve come to meet the country’s new government leaders and other influential figures. In our first three days, we interviewed more than forty government officials, opposition politicians, diplomats, businessmen, civil society activists, journalists and think tank scholars.  While our interlocutors represent a wide variety of views and interests, a common theme from them has been worry about Ukraine’s future, sometimes spilling over into outright pessimism.

To be sure, some of the mood change is the decline of immediate hopes following a successful election that were unrealistically high. The new president, Petro Poroshenko, had achieved an unprecedentedly broad victory, uniting the eastern and western parts of the country that typically have voted opposite ways, boosting both optimism and wishful thinking.

Still, the politically involved citizens we have met are struggling this week to make sense of what they are hearing from the governments to their west upon which they are relying for support in their war with the Russian government and state of President Vladimir Putin.

Ukraine needs two things to win the irregular war in the southeast.

First Ukraine’s security forces – the army, police, border police, secret police (Ukraine Security Service, or SBU) – must be able to defeat the insurgents on the ground.

Second, the West must support Ukraine by making clear to the Kremlin that it must stop the thousands of Russian fighters, plus money and military equipment, crossing its border. The West can do this with two steps.  It can threaten, and actually impose, punishing sanctions across entire sectors of Russia’s economy if the Kremlin continues this aggression. It also can supply Ukraine with selected types of  military hardware to help defeat the insurgency even if – as has been the case so far – the Kremlin sends in more fighters and more sophisticated military equipment. Thus far, the West has pretty much ruled out the military option, but it has talked quite a game on sanctions.

This is where the disappointment comes in. In the spring, the U.S. and the EU leveled two rounds of sanctions against key figures in the Kremlin’s power structure for its increasingly documented aggression against Ukraine. In early June, President Obama and British Prime Minister David Cameron announced that the Kremlin had thirty days to “use its influence on the separatists in eastern Ukraine to end the fighting.” (That formula is a circumlocution for ending the flow of fighters and equipment from Russia into Ukraine.) Failure to do so, Obama and Cameron made clear, would bring punishing sanctions against one or more sectors of the Russian economy.  As recently as Friday, June 27, German Chancellor Angela Merkel and French President Francois Holland reiterated this warning and set June 30 as the deadline.

At the same time, the Europeans were pursuing negotiations with Russia and Ukraine for a diplomatic solution.  As part of this effort, Kyiv and the Russian-backed separatist militias  agreed to a cease-fire. During the ten days of this truce, the insurgents, whose most prominent commander is the Russian army’s Colonel Igor Girkin, conducted more than 100 attacks on Ukrainian installations. Twenty-seven Ukrainian soldiers died in these attacks and 63 were wounded.  Equally important, ten tanks, as well as anti-aircraft weapons and other military equipment crossed from Russia into Ukraine during this period – a clear indicator that in defiance of the US and European deadline, the Kremlin was increasing its interference in Ukraine.

And what were European leaders doing on Monday, June 30?  As we heard from Ukrainian interlocutors inside and outside the government, those leaders were calling Kyiv insisting that it extend the ceasefire. And the sectoral sanctions?  The Wall Street Journal on July 2 cited several high-level Western European diplomats as explaining that the sanctions were not applied because the Russian government’s reaction to the demands of the West was mixed. These sources referred to Russia’s willingness to talk about a diplomatic solution to the crisis and to consider, in certain conditions, some form of Ukrainian and Russian joint control of the border with OSCE monitoring.

In other words, for those anonymous Western European diplomats, Kremlin words about a possible diplomatic solution were enough to offset actions that deliver relatively sophisticated weapons to an insurgency that could not survive without Russian support.

Instead of chastening Moscow for escalating its aggression in Ukraine, Western diplomats spent Monday hectoring the government in Kyiv for choosing to end a truce in which it suffered nearly 100 casualties and Moscow increased the fighting capacity of the separatists.  This was enough for President Putin to announce triumphantly to his assembled ambassadors this week that he and his European partners share a similar view of the crisis in Ukraine.

It is a good thing that Ukrainians have a well-developed sense of irony and a growing firmness of national purpose. That helps them maintain the necessary calm and determination in the face of European folly. It is also a good thing too that Ukraine is a functioning democracy with a strong civil society. A large majority of Ukraine’s citizens are outraged by the insurgents’ attacks during the ceasefire and over 60 percent expressed support for putting an end to the truce. This means that President Poroshenko has both national security and domestic political reasons for proceeding with the campaign against the Kremlin’s insurgency. One can only hope that Western Europe will come to its senses and realize that the purpose of diplomacy is not to make the world safe for the sale of French Mistral warships to the revisionists in Moscow.

John E. Herbst, a former US ambassador to Ukraine, directs the Eurasia Center of the Atlantic Council.