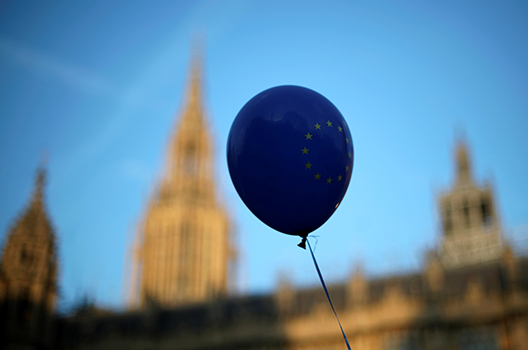 Former US President Lyndon B. Johnson bequeathed two definitive political lessons: learn to count and don’t tell the world you’re quitting. British Prime Minister Theresa May sought to prove on March 27 that she had finally learned the first lesson, only to demonstrate she had palpably failed to understand the second.

She intimated that she would stand down as prime minister as soon as Britain left the European Union in a bid to win back support in her own fiercely divided Conservative Party, a last gasp gamble which, if it succeeds could see Britain leave the EU and May leave her office at No 10 Downing Street on the same day: May 22.

But that depends on whether, in the wake of a series of voting disasters, she really has managed to count the votes accurately so that she can both hold and win a vote in the next few days that would enable the UK to leave the European Union.

There is no guarantee that a vote will even be held. And while some of the leading Conservative rebels —notably former Foreign Secretary Boris Johnson and arch-Brexiteer Jacob Rees-Mogg—were smiling broadly at the prospect of ditching the prime minister if they voted her deal through, it is still not clear that May has won over enough MPs to turn her previous 149-vote defeat into victory. Late on March 27, May’s supposed ally, the ten-strong contingent of Northern Ireland’s Democratic Unionist Party, announced that it would continue to oppose her deal. Of course, what May has done is fired the starting pistol for the next Conservative Party leadership contest.

Much of the day’s proceedings in the House of Commons provided proof of  May’s failure to date. MPs debated potential outcomes to the three-year-old Brexit saga and then held a series of paper ballots that would serve as an indication of the outcomes they preferred, rather than as a binding instruction for the government to follow.

And the very reason why they were able to operate in such an unorthodox way was because, in a vote on  March 25, the government lost control of the parliamentary agenda for the first time in more than a century.

For days – some commentators would say weeks or even months – May has operated within a swirl of rumors of coups, threats, and both actual and threatened ministerial resignations as she lost battle after battle to secure parliamentary approval for the Withdrawal Agreement she concluded with the European Commission last November.

In December, she was forced to concede that she would not lead Conservatives into the next general election (at that time, it was expected to take place in 2022) in order win a confidence vote. Under party rules, this should have bought her a further twelve months as unchallenged leader.

But such is the massive unrest within the Conservatives that, at a meeting of Conservative MPs on the early evening of March 27, she declared: “I am prepared to leave this job earlier than I intended in order to do what is right for our party and our country.” She gave no date, but the assumption was that she would quit immediately once the UK had legally left the EU, so that some other leader would handle the next set of negotiations with the European Commission on Britain’s future relations with the EU.

It was an echo of Lyndon B. Johnson’s announcement on March 31, 1968 that he would not seek re-election the following November, and that he would devote the rest of his time in office trying to secure a negotiated end to the Vietnam War. He wasn’t able to end the war—and he effectively became a lame duck president from that moment on. May, of course, is now also a lame duck, and we don’t even know how long she might attempt to stay on in office if her deal is rejected once again.

In the House of Commons, MPs were engaged in a process that really should have begun as soon as May lost her overall parliamentary majority in the 2017 general election: finding out whether there was a natural cross-party majority for any specific outcome or whether some combination of potential outcomes would be required.

But when these votes were tallied, however, it was something of an anti-climax. None of the specific proposals could command a majority.

But they did provide some pointers. A proposal from former Conservative Chancellor of the Exchequer Ken Clarke, an ardent remainer, favoring UK membership of a customs union with the EU was defeated by only eight votes, 272 to 264. An official Labour Party proposal for a customs union that would be strongly aligned to the EU’s single market failed by seventy votes, 307 to 237.

A call by former Labour Foreign Secretary Margaret Beckett for a confirmatory referendum to be added to any agreed outcome was defeated by twenty-seven votes, 295 to 268.

All the other motions were defeated by much larger margins.

If May fails to secure her own deal later this week, then Parliament will have another round of this kind of voting on April 1. By that time, the question will be whether MPs who voted for some of the more heavily rejected options, such as the creation of new Common Market (defeated 283 to 188) or leaving without a deal (defeated 400 to 160), are prepared to back ideas that suffered narrower defeats. The fact that government cabinet ministers overwhelmingly abstained in these votes, along with some other Conservative MPs, could also change the balance once the prime minister’s deal is out of the way.

And, of course, there is the possibility that some of the proposals might be merged, notably those involving a customs union and a confirmatory referendum.

But there were some positive votes today. The Scottish Parliament voted eighty-nine to twenty-eight to cancel Brexit in the event that a further referendum could not take place. It was a largely symbolic vote, but it did highlight the fact that not only does Scotland continue to favor remaining in the EU, but that the Scottish Conservatives remain isolated in their support for Brexit.

And at Westminster, the House of Commons, in an old-fashioned through-the-lobby vote, formally approved by 441 to 105 legislation necessary to delay any move to quit the EU from the previous exit date of March 29. Current arrangements now provide for a prospective exit from April 12 if no agreement has been reached by then, and for a departure date of May 22 if Parliament does approve a withdrawal agreement by April 12.

Image: A ballon is seen outside the Houses of Parliament in London, Britain, March 27, 2019. (REUTERS/Hannah McKay)