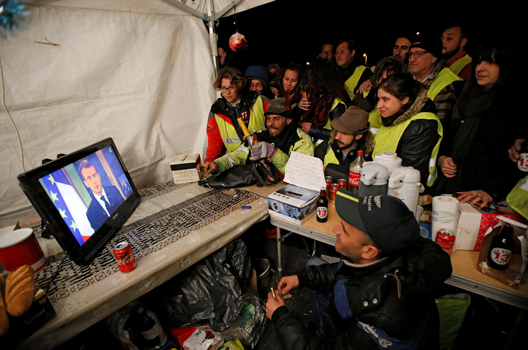 Having judged Theresa May on her leadership and found her wanting in a sense of reality, political honesty, a willingness to understand her opponents, and a commitment to seek consensus, one can ask how well Emmanuel Macron has fared by those same criteria, particularly as he has faced the “Yellow Vest” movement of grassroots protesters donning the high-viz jackets that all French motorists are required to carry in their vehicles and which have become both a uniform and a distress signal of those who feel left behind by globalization, the Parisian elites, and the haughty demeanor of Macron himself.

First, the differences: Macron was elected in May 2017 for five years, he has a massive majority in the French National Assembly, his government is rock solid from a political standpoint, and nobody in France is calling for the country to leave the European Union. But from there, the similarities: like May after surviving votes of no confidence, Macron, his government and his parliamentary majority have the power to govern while their legitimacy as representatives of popular opinion is contested.

The Yellow Vest movement was started and has been organized on Facebook. There is no question that social media has played an enabling role in the fissiparous movement. And there is no question that, just as the Brexit divide cleaves Britain, the Yellow Vest movement—setting aside the ultra-violent thugs who have used the movement as cover for their destructive derangement—is a product of the same class conflicts that are evident throughout much of the West.

Macron was slow to achieve a genuine sense of reality, in spite of early appearances to the contrary. He is neither a professional politician nor an experienced leader. His main source of success has been his intellectual brilliance and his ability to please older people at close range. Macron did seem, throughout his presidential campaign, to display a sense of reality about the genuine nature of the problems that France faced—unemployment, lack of skills, too much debt, a tax-and-benefits system that cripples creativity and undermines the value of work. But if he was able to visualize the problems at a macro level as a brilliant student and technocrat, he did not, as it turned out, have the hard-bitten experience to see trouble on the horizon, especially since his first year and a half in office, with no further elections, allowed his programs to sail through parliament and public opinion largely unopposed.

So when the Yellow Vest movement started in November, Macron was reticent to recognize the authenticity of people’s distress. It is true that the French have a distinct sense of entitlement and are convinced that they should share in the collective wealth whether they have individually earned that or not. But for Macron to tell a job seeker that all he has to do is cross the street, or to upbraid a high school student for familiarity, or to talk of people who “are nothing,” or to say, just recently, that that too many French are unwilling to recognize the value of making an effort—while all these things may be demonstrably accurate—creates an unnecessary political liability.

So Macron achieved a sense of reality the hard way: he failed. Four weeks after the beginning of the Yellow Vest movement, he apologized to the nation for his arrogance and he gave away the store, using government money to provide benefits and reverse policies which are estimated to cost in excess of €10 billion and by some accounts up to €15 billion.

Then, in his New Year address, he took a tougher line, lambasting those who resorted to violence and striking a much more law-and-order tone. And he said he would soon be writing to the French people.

Now, in mid-January, he has done something ineffably French, penning a letter to all Frenchwomen and Frenchmen and calling for a Great National Debate, to last until mid-March and focused on government spending and taxation, governmental organization, the transition to a green economy, and democracy and citizenship. France has 36,000 municipalities, about the same number as the United States and around the same number as immediately after the French Revolution, and half of all the municipal governments in the entire European Union. This means that local government in France is actually very present in people’s lives and quite strongly engaged on local issues. Consequently, Macron has organized the Great National Debate to take place in town halls and to kick off the debate he conducted a 6-1/2-hour question-and-answer session in Normandy to an audience of several hundred mayors who, at the end, gave him a standing ovation.

Predictably, these initiatives have been dismissed as window dressing and smokescreens by parts of the media and by the Yellow Vest spokespeople. But indications are that the whole operation has been very thoughtfully organized and could well appeal to the French people’s desire to see public debate conducted with respect and an open mind, which Macron maintains he has.

In light of his course correction, Macron achieves an improving score on his sense of reality.

Similarly, while he has tried to sugar the pill somewhat (his letter to the French begins with a reminder that “France is a country like no other”—the French love their exceptionalism as much as Americans do), he has by and large been honest and straightforward with the French people. His shortcoming is not so much a desire to dissimulate but, as has been clear in repeated over-lengthy speeches, a tendency to develop uselessly complex intellectual argumentation that people are simply not interested in hearing.

He has improved, too, in his willingness to try to understand his opponents. His natural tendency, as a blue-eyed wonder boy, is to be dismissive of losers. But he now seems to have understood that disdain will win him few friends and might lose him many votes. Having to apologize to the nation in December for his “hurtful words” cannot have been a pleasant experience and he probably does not want to repeat it.

In terms of a search for consensus, Macron and his government employed highly consensual processes in order to get their labor code reforms through last year. But they have been criticized for forcing through other changes without adequate consultation, such as lowering the rural speed limit and increasing fuel taxes, both of which are at the core of the anger of the Yellow Vests.

So on the criteria on which May has so far failed, Macron achieves a “can do better” mark, and the trend seems to be his friend. What he must do now is to articulate a vision of a changed and better future, not just a reaffirmation of traditional values, and, as he signs the new version of the Franco-German Treaty on January 22 in Aix-la-Chapelle, he must attempt to expand that vision to a European scale, particularly in the run-up to the European Parliament elections this May. His leadership, embattled a month ago, is recovering, but the proof of its permanence is yet to come.