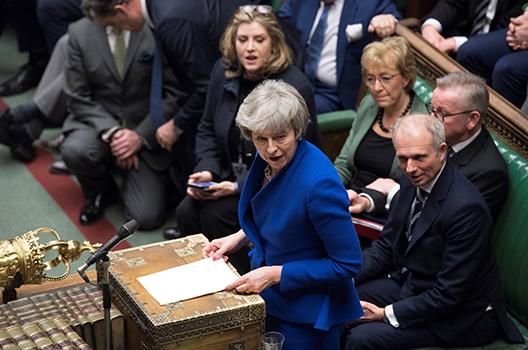 On January 16, British Prime Minister Theresa May won the day against a motion of no confidence in her government by nineteen votes after losing a vote on her Brexit withdrawal agreement the day before by 230 votes, the largest proportion of MPs voting against a government motion ever recorded in the entire history of the British Parliament. In December 2018, she won a vote of no confidence within her own parliamentary party (the Conservative Party), which cannot be renewed for a year. She is, therefore, now politically unassailable both as prime minister and as leader of the Conservative Party.

But even if she has retained formal “confidence” she has lost the faith of the people and of Parliament to lead the country, not only but especially in the Brexit negotiations.

This predicament, from which she must extract herself within three parliamentary business days, stems from her having contravened the most basic lessons of leadership: a sense of reality, honesty, an understanding of the opposite number in a negotiation, and a search for consensus.

The in-out referendum promised and delivered by the then prime minister, David Cameron, on June 23, 2016, was based on ignorance and opportunism. Ever since Britain joined the European common market on January 1, 1973, the British public and political class have largely remained shamefully unaware of the objectives and the workings of the European Union. For Cameron to promise an in-out referendum was folly based on no study or simulation whatsoever of the consequences. Cameron was dogged by the Eurosceptics in the Conservative Party and wanted to cut the Gordian Knot of resistance to Britain’s EU membership once and for all. But he sought to do so with no sense of the reality of the results of his actions.

May inherited this folly when she became prime minister on July 13, 2016, following Cameron’s resignation on the morrow of the referendum. From that moment onward, she had the opportunity and the duty—especially since she had been firmly in the Remain camp, opposing Britain’s exit from the EU—to tell it like it was: to explain that this referendum had been based on false premises, that it had over simplified the issue, that no government could deliver a clean Brexit and, above all, that Britain would be ineluctably worse off leaving the EU than staying in it.

Instead, she eschewed the patently obvious reality and, in doing so, failed to be honest with the public. Her “red lines” were from the beginning unilateral and unenforceable. Her “Chequers” proposal contained provisions which would never fly with the EU. Her repeated insistence that Britain could “take back control” of its laws, borders, and money free from EU interference, while enjoying an exceptionally favorable economic relationship with the EU, was simply a lie.

From the beginning, May and most others in Britain—not only in politics but even, perhaps especially, in the media—completely misjudged the nature of the withdrawal process with the EU. The prime minister, members of her government, and virtually everyone else in the UK portrayed the discussions as a negotiation, indeed a negotiation of equals. Again, nothing could have been further from the truth and that was perfectly plain to anyone looking at the situation from the EU’s point of view. The EU is a system of laws and regulations agreed by sovereign governments. For the EU, Brexit is a legal and administrative process, in which the principles of the EU—particularly the four freedoms: the free movement of goods, services, capital, and people—must be respected and in which all the outstanding issues must be addressed. This is why Michel Barnier, the EU’s chief Brexit negotiator, for so long asked what was going to be done about the pet passport, a small but nonetheless essential item, concerning the border crossing of people’s domestic animals, that simply needed to be dealt with.

On a larger scale, the requirement for an open border on the island of Ireland falls into the same category, as does the preservation of the rights of EU nationals in Britain and British nationals in the EU, a subject on which the British side has been conspicuously callous while the EU has strongly and consistently supported those rights.

Indeed, the EU, because it was clear on its realities, has remained strikingly united and professional at every stage of the Brexit process.

Had May and other politicians been imbued with a sense of reality and insisted on being honest with each other and the public, they could, and should, have easily comprehended that for the EU Brexit was in no way a negotiation. It is simply a process—the accession process in reverse, in which the EU holds not some, not most, but all of the cards, all the decision-making power.

That was true before, during, and after the referendum. It is true today.

Throughout the process of “negotiation,” May maintained a tight control over information even within the British Cabinet. The former deputy education minister, Sam Gyimah, who resigned at the end of November 2018 in protest against Brexit, told the BBC’s Christian Fraser on live television on January 15, 2019, that Cabinet ministers were kept in the dark about the negotiations throughout and yet were expected to vote in favor of whatever the prime minister produced. Not only did she not attempt to establish a consensus with those whose support would ultimately be necessary—especially after she called and lost a snap election in June 2017, forcing her to govern in alliance with the tiny and opinionated Northern Irish Democratic Unionist Party—she more spectacularly failed to “reach out” to the opposition, not just the  Labour Party but also the Scottish National Party (Scotland voted 62 percent to Remain in the EU) and even the pusillanimous Liberal Democrats, who nonetheless have twelve MPs in the current House of Commons. She chose to convey messages rather than try to establish dialogues.

Now that she has survived votes of confidence within her own party and in Parliament, May has asked to meet the leaders of all the parliamentary parties in the House of Commons. She will then need to bend or erase her “red lines” in order to avoid a no-deal disorderly Brexit on March 29, 2019. She may need to ask the EU for an extension of the Article 50 period before Britain formally leaves the EU, which she has said she would never do. She may, against everything she has said, need to accept a second referendum, a “People’s Vote.” In short, she will now need to do everything she has not done since 2016: recognize reality, be honest with herself and the public, correctly assess the EU’s positions, and create a genuine consensus supported by a majority of the MPs. Tom Watson, the deputy leader of the Labour Party, delivered a devastatingly cruel speech before the no-confidence vote, explaining that May simply did not have the character or the political skill to be a credible prime minister. She will now have to prove him wrong. She has the political standing to do so. Whether she has the personal capacity to do so will now be the test of her leadership.

Tomorrow: Lessons in Leadership: Emmanuel Macron and the Yellow Vests