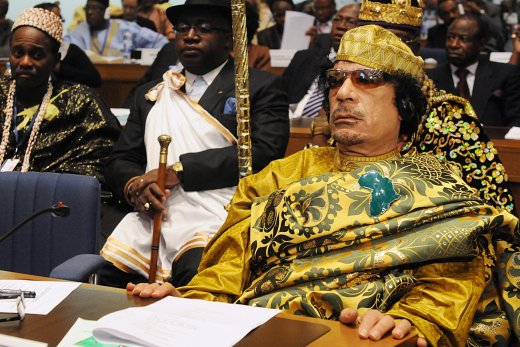 As Western-led operations against forces loyal to Libya’s Colonel Muammar Gaddafi continue, most analysis in the media has situated events in the context of the developments in the Middle East and its impact on it. Largely forgotten, however, is that Libya is an African power whose fate has significant implications for the rest of the continent.

Gaddafi has long harbored ambitions of hegemony over the continent and, at least until very recently, he did not hesitate to advance that objective when he thought he could get away with it. In the 1970s and 1980s, he incited numerous rebellions in Sudan and sent his army into Chad to make a grab for the disputed Aouzou Strip. In the 1990s, at least a quarter of million West Africans lost their lives because he backed two warlords, Charles Taylor of Liberia and Foday Sankoh of Sierra Leone, who started a decade of civil war from which the subregion is just now recovering.

The Libyan ruler also had a hand in creating both the Africa Union as well as the twenty-eight-member subregional Community of Sahel-Saharan States (CEN-SAD) which has its permanent headquarters in Tripoli. The African Union, as its leaders acknowledged rather obsequiously in their 1999 Sirte Declaration, issued from Gaddafi’s hometown, was “inspired by the important proposals submitted by Colonel Muammar Gaddafi, Leader of the Great Al-Fatah Libyan Revolution, and particularly, by his vision for a strong and united Africa, capable of meeting global challenges and shouldering its responsibility to harness the human and natural resources of the continent in order to improve the living conditions of its peoples.” In addition to lobbying for the AU’s creation, Gaddafi is paying a good chunk its operating costs. Not surprisingly, the mercurial colonel was elected to chair the AU in 2009, while the pan-African body itself—unlike the Arab League—has been largely absent from the debate leading up to the adoption of United Nations Security Council Resolution 1973.

More than its political influence, however, has been Libya’s economic reach throughout the African continent, driven by the substantial revenues from the country’s energy sector coupled with a relatively small population among which that wealth has to be shared (to the extent that it was shared at all before Gaddafi’s promise of subsidies to every family). From the Libyan Arab Foreign Investment Company (LAFICO), first established three decades ago, the Gaddafi regime expanded its portfolio to include no fewer than another six such investment vehicles, including the Libyan Investment Authority, the Economic and Social Development Fund, the Social Security Investments Fund, the Libya Africa Investment Portfolio, the Libyan African Investments Company, and the Libyan Foreign Investments Company. The decisions made by these sovereign wealth funds seem to be economic, although they are not without geopolitical implications. The investments have included everything from leasing 100,000 hectares of agricultural land in Mali to majority ownership of the Novotel in Kigali, Rwanda, to a 69 percent stake in Uganda Telecom to Oil Libya Holding Company’s more than two thousand gas stations in some twenty different countries.

The Libyan financing has been critical to the building of infrastructure in Sub-Saharan African, including the reverse flow-capable extension of the Mombasa-Eldoret oil pipeline in Kenya to the Ugandan capital of Kampala. The recently announced tender for the construction of a 230-kilometer pipeline from Lake Albert to Kampala is predicated upon the construction by the Libyans of the extension from Kenya, while soon-to-be-independent Southern Sudan’s ambitions of bypassing the North with its oil exports is largely based on the completion of the Ugandan pipeline. Thus the extent to which a post-Gaddafi Libya—or Gaddafi himself, should he somehow manage to survive the pounding being delivered against his forces—chooses to remain engaged in Africa will have serious repercussions on infrastructure as well as overall development on the continent.

The coalition military operations against Libya themselves will likewise have considerable impacts on Africa, not least because of the initial phase of the campaign is being led by the U.S. Africa Command (AFRICOM). The launch of the command four years ago was fraught with controversy, both on the African continent and beyond, over its mission and scope. Thanks to the efforts of the first commander, General William E. “Kip” Ward, who stepped down just two weeks ago, and his team, many of the difficulties have been overcome. But for AFRICOM to now find itself engaged in its first major combat operation on the African continent without the blessing of the African Union—not that such should be an exclusive criterion for legitimacy—is certainly awkward and will, undoubtedly, affect the future relations with a number of African states which the command and its new commander, General Carter F. Ham, will have. Moreover, if Gaddafi is ultimately defeated, the fate of the Africans—whatever their real number—who have fought for him will be an important security issue for the countries bordering Libya as well as the home countries of these mercenaries.

Finally, there is the possibility that extremists like those belonging to al-Qaeda in the Islamic Maghreb (AQIM) will exploit the current chaos and the vacuums likely to emerge from it. Whatever else the Gaddafi regime did, it suppressed the Libyan Islamic Fighting Group (LIFG) that had been formed by Libyans returning from the fight against the Soviets in Afghanistan and other Islamist groups. In fact, the eastern regions around Benghazi, Derna, and Ajdabia —which are the centers of the uprising—were at various points home to one or another Islamist opponent of Gaddafi. AQIM’s leadership, in fact, has even issued a statement of support for the rebels in which it described Gaddafi as “an enemy of Allah.”

Now that the United States and its allies have made the decision to intervene in Libya, policymakers and analysts need to take stock of its impact not just on the Gaddafi regime, but on the African continent which has for so long been the colonel’s playground.