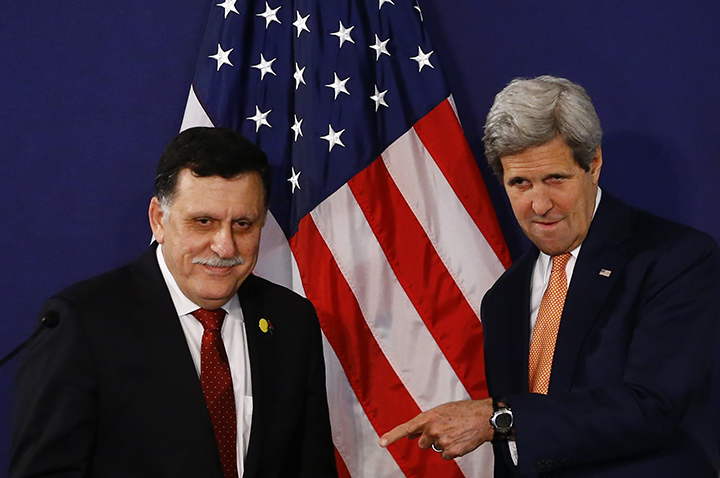 A decision by the United States and twenty other nations to provide weapons and training to help Libya’s UN-backed government fight the Islamic State of Iraq and al-Sham (ISIS) will put pressure on opponents—particularly a popular former General in Benghazi—to rally behind the new administration, said the Atlantic Council’s Karim Mezran.

The communique of support, the product of a meeting in Vienna, Austria, on May 16, “puts in black and white the fact that all the countries that signed this communique are strongly behind the Government of National Accord,” said Mezran, a Resident Senior Fellow in the Atlantic Council’s Rafik Hariri Center for the Middle East.

“This should mean a lot from a practical point of view because by agreeing to this communique, countries like Egypt and United Arab Emirates, which have been supporting [Gen. Khalifa] Haftar, have the duty now to ‘convince’ him to accept the role of the GNA,” he added. Haftar was appointed army chief by the former, internationally recognized government in Tobruk.

Libya has been plunged into chaos since its longtime leader, Moammar Gadhafi, was ousted and killed in an Arab Spring-inspired revolution in 2011. The country has until as recently as March been split between two rival governments—an Islamist-backed one in Tripoli and an internationally recognized one in Tobruk.

Following protracted negotiations between both sides, a UN-backed Government of National Accord (GNA), led by Prime Minister Fayez Serraj, was installed. However, the GNA has yet to win a vote of approval in the Tobruk-based House of Representatives (HoR).

While acknowledging the GNA as “the sole legitimate government of Libya” and security as “key for the future of Libya,” countries participating in discussions in Vienna said in a joint communique: “The GNA faces critical security challenges, but it does not face them alone.”

The signatories include the European Union, the United Nations, the League of Arab States, and the African Union, as well as Egypt and the United Arab Emirates—two countries that have provided military support to Haftar.

The provision of military aid to the GNA has been made with an eye firmly on the growing threat posed by ISIS and other militant groups that have exploited the chaos in the North African nation, as well as the migrant crisis facing Europe. Libya is a major conduit for human traffickers.

A UN arms embargo prevents Libya from purchasing fighter jets, attack helicopters, tanks and munitions. The rationale behind this embargo, when it was put in place last year, was a warning from a UN panel of experts that arms shipments could fall into the wrong hands.

The GNA will seek an exemption from the arms embargo in order to facilitate the fight against ISIS. “We will fully support these efforts while continuing to reinforce the UN arms embargo,” according to the joint communique.

The European Union, meanwhile, has already offered security assistance to the GNA; and US warplanes conducted airstrikes on an ISIS training camp on the outskirts of the western Libyan city of Sabratha on February 19.

Q: What is the significance of the decision reached in Vienna?

Mezran: It puts in black and white the fact that all the countries that signed this communique are strongly behind the Government of National Accord. This should mean a lot from a practical point of view because by agreeing to this communique, countries like Egypt and United Arab Emirates, which have been supporting [Gen. Khalifa] Haftar, have a duty now to “convince” him to accept the role of the GNA. The problem is that the Egyptians have been saying for a long time that they are behind the GNA, while at the same time they have been arming Haftar. We will have to wait and see whether Egypt will continue to do the same now that it has signed the communique.

From a practical point of view, I don’t think anything will change. The signatories will take into consideration lifting the [UN] embargo to provide weapons to the GNA to take on ISIS, but they will maintain the embargo for every other force. This embargo has been broken many times by the Egyptians and the Emiratis as they supported Haftar, but theoretically at least it is still standing.

Q: Does the GNA have a centralized military force at its command?

Mezran: Not yet, but the GNA has formed a unified command, which Haftar does not recognize. That’s why there was an invitation at the ministerial meeting for all forces to accept the rule of the GNA and work under a unified command.

Q: What role do you see for Haftar and his troops in Libya’s security?

Mezran: Officially, there is no other role than to accept the writ of the GNA and to submit themselves to its authority. I don’t think that will happen unless Haftar receives guarantees for his role in the military. In reality, what Haftar has been trying to do so far is obtain a fait accompli on the ground. It is hard to say whether there is a plan behind his more recent maneuvers and the rearming of his troops by the Egyptians. If there is a plan, we will not see Haftar subjecting himself to the will of the GNA.

Q: A UN arms embargo prevents weapons going to Libya. What has changed on the ground for concerns about arms falling into the wrong hands to now be set aside?

Mezran: The GNA is now in existence, so there is a new government that has been recognized by everybody. Therefore, there is no legitimate reason for not allowing this government to arm its own troops.

Q: Why wasn’t this embargo eased for the former, internationally recognized government in Tobruk?

Mezran: Even though it was internationally recognized there were so many doubts about its effectiveness and legitimacy. This prevented the United Nations from lifting the embargo. Moreover, there was the conviction that in order for the negotiations [with the Islamist-backed government in Tripoli at the time] to succeed no side should be empowered enough to believe that a military victory was possible on the ground.

Q: The GNA also faces political challenges. It has yet to be recognized by the House of Representatives, which is based in Tobruk. How important is such recognition?

Mezran: We have seen more and more that the HoR is trying to meet in order to vote, but the majority of deputies are being prevented from voting by a vociferous and violent minority. It is a fact that needs to be taken into account. If a bunch of thugs can prevent voting in the assembly, then it might be legitimate to forgo this step altogether.

Q: There have been reports about US Special Operations troops being posted in Libya. Will Libya’s government require more robust support—boots on the ground—besides weapons and training?

Mezran: That is a military question. The government of Serraj has not requested boots on the ground. The situation on the ground will determine whether more Special Forces will be needed to defeat ISIS or whether the Libyan troops will be enough. The fact is, if Serraj does not request these troops the Americans will not be able to send them.

Image: Libyan Prime Minister Fayez Serraj (left) and US Secretary of State John Kerry arrive for a news conference in Vienna, Austria, on May 16. (Reuters/Leonhard Foeger)