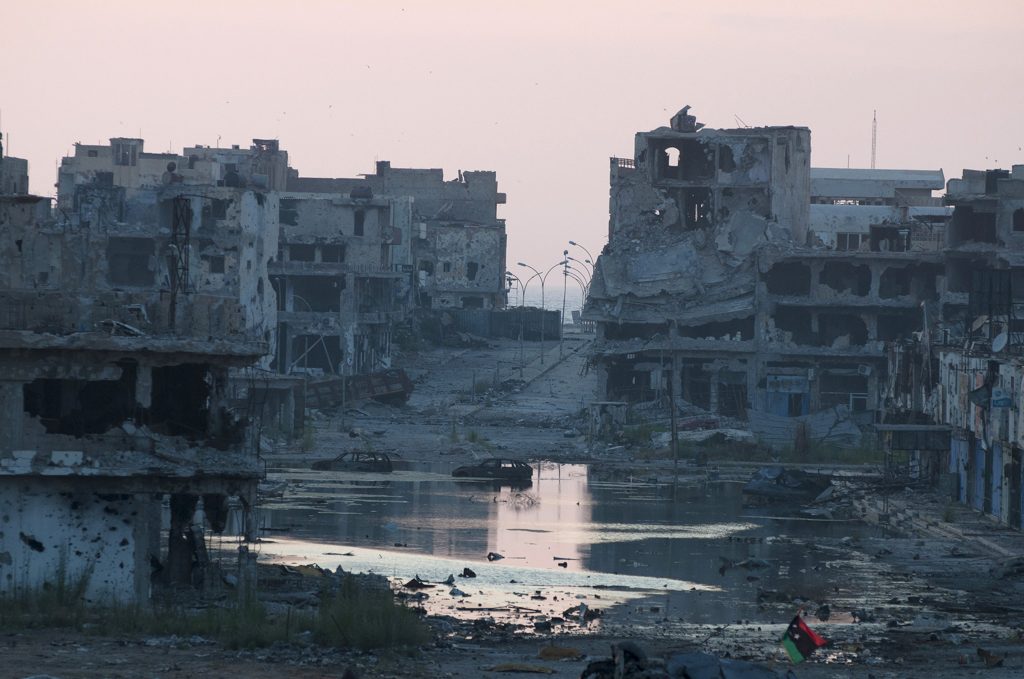 Damaged homes are seen after clashes between members of the Libyan pro-government forces, backed by the locals, and Shura Council of Libyan Revolutionaries, an alliance of former anti-Gadhafi rebels who have joined forces with Islamist group Ansar al-Sharia, in Benghazi, Libya, July 7. (Reuters/Stringer)

Even if a Tripoli-based faction were to set aside its grievances and sign a UN-brokered peace deal that would not be enough to rescue Libya. What the North African nation needs is an international peacekeeping force with a clear mandate to fight terrorists, says the Atlantic Council’s Karim Mezran.

Chaos has followed the 2011 ouster of Libya’s longtime dictator Moammar Gadhafi. Libya today has two power centers—one in the capital Tripoli and the other in the eastern city of Tobruk. (Only the government in Tobruk is internationally recognized.) Libya has become a conduit for thousands of migrants fleeing north to Europe and its security is in the hands of groups that often have no more than local control.

A protracted United Nations-backed peace process has produced an agreement to form a national unity government. There is a catch. The Tripoli-based General National Congress has refused to sign the deal.

“It is true that without the signature of the GNC the agreement is not perfect,” said Mezran, a Resident Senior Fellow at the Atlantic Council’s Rafik Hariri Center for the Middle East.

But, he took the optimistic view that “seventy percent of the participants have signed the agreement, which shows the willingness to support this deal.”

Advocating for an international peacekeeping force to rescue Libya, Mezran acknowledged criticism of the plan that Libyans would view it as an occupying force and become a target for Islamic State of Iraq and al-Sham (ISIS) terrorists.

“Of course this is not going to be a walk in the park,” he said.

Karim Mezran spoke an interview with the New Atlanticist’s Ashish Kumar Sen. Here are excerpts of that interview.

Q: What is the status of the UN-brokered peace talks?

Mezran: The agreement has been signed by most of the participants to the dialogue representing most of the factions except the important faction represented by the General National Congress in Tripoli.

It is true that without the signature of the GNC the agreement is not perfect. I understand critics who say it is a failure without the GNC, but I like to look at it in another way. Seventy percent of the participants have signed the agreement, which shows the willingness to support this deal. The door has been left open to the GNC to come in and discuss any amendments they want to propose, not to change the draft, but to add annexes to the draft if they have any particular grievances.

Q: What should be the international community’s role in pushing this process over the finish line?

Mezran: International pressure must be used to convince the GNC to limit its demands and join the agreement because the situation in Libya is rapidly collapsing into anarchy.

If the agreement does not lead anywhere the spoilers have the upper hand. By spoilers I mean some militia leaders, gangsters, Daesh, jihadi terrorists, and maybe even Gen. [Khalifa] Haftar from the east. The good guys have to get together to put forward this agreement and try to save the country.

The international community has a very important role to play. It should urge the regional actors to put pressure on the various Libyan actors to comply with the ceasefire that is part of the agreement thereby creating conditions in which the new Libyan government, once it is appointed, can be safely installed in Tripoli.

Q: Are UN sanctions on the GNC, as has been suggested by some diplomats, a realistic option to get them to sign the deal?

Mezran: Sanctions are a double-edged sword. It is a threat that needs to be used with a lot of care.

Q: Does the GNC signing up guarantee the success of this deal?

Mezran: I do not think that even if the GNC agrees, even if everybody signs up, that the new government can be safe in Tripoli and can begin to work without the support of an international peacekeeping force.

An international peacekeeping force should be on the ground in Libya to guarantee the security of the vital installations, the city of Tripoli, and the immediate surroundings, including the airport and the ports.

There are a lot of objections to a peacekeeping force. Some experts say it will be seen as an invading force and will become a target for Daesh.

Q: Why did GNC representatives back away from the peace process?

Mezran: First, they believe the draft gives too much power to the House of Representatives [which is based in Tobruk]. It creates a new chamber in which ninety of the 120 members will be taken from the current GNC, but it only gives them a consultative role. So the GNC members feel marginalized.

Second, they say that if you are so attentive to a democratic process you cannot ignore the decision of the Supreme Court last year to nullify the election of the House of Representatives.

In my opinion, these are points of principle and can be overcome. The GNC should understand that they can set aside these principles for the greater good of the country. Every objection can be ignored if the alternative is plunging the country into chaos.

Q: What are the elements of this peace deal?

Mezran: A national unity government will be centered on a President and two deputies. They will propose a government that will be accepted by the HoR.

Signatories to the deal will pick the President and the two deputies. This will be the hard part as clan and tribal rivalries will emerge as a big obstacle in this selection process.

Q: What are the security elements of the deal? Is there any agreement on how to deal with the various militias?

Q: What role can regional actors play in ensuring the success of the peace process?

Mezran: Because of what is going on with Iran and Yemen, both the United Arab Emirates and Saudi Arabia are sending signals to Egypt that they will not support military action in Libya. [Editor’s note: Egypt conducted airstrikes on suspected ISIS terrorists in Libya in February.]

And now the Egyptians are backtracking in their support for Haftar for various reasons, including the fact that they are getting messages from the Saudis and the Emiratis, and because they have their hands full with problems in the Sinai and also have to deal with internal politics.

The Qataris and the Turks, too, have in a sense been convinced to support the peace dialogue.

Q: What should be the priorities of a national unity government?

Mezran: First and foremost it should bring back security to the country, disarm the militias, and stop the fighting. Then it should rebuild the infrastructure, open the ports and the oilfields, and begin projects for the reconstruction of schools, hospitals, and roads.