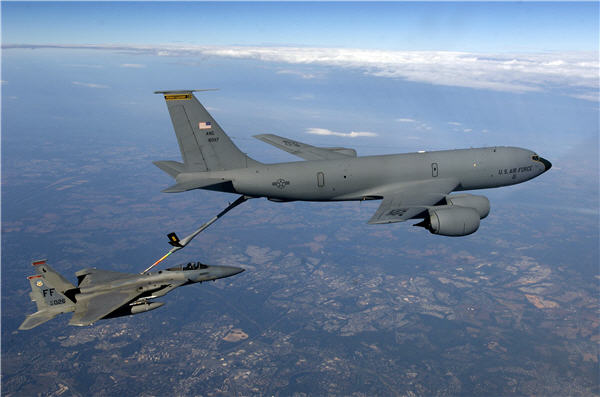 With the crisis in Libya moving at a breakneck speed, some have begun to call for the U.S. and NATO to do more to assist the opposition and halt human rights abuses perpetrated by the Gaddafi regime. The measures being proposed include a no-fly zone, which would prevent the regime from using airpower to suppress the uprising. However, while this may seem an enticing way to demonstrate U.S. and allied commitments to democracy and human rights, it would be harder to do than many assume and may send the wrong message to Tripoli and the region.

To establish no-fly zones and maintain U.S. and coalition combat air patrols (CAP) over Libya would require substantial combat power to be brought into the region. Fighter jets have short legs (small combat radius), so would therefore require the support of in-air refueling tankers to make the hop into Libya, conduct a CAP, and come back out. (It’s not unusual for U.S. fighters to take a sip of fuel off a tanker four or five times during a single mission over Afghanistan or Iraq.) Also, the fighter jets will require command, control, and battlespace management support, so Airborne Warning and Control System (AWACS) planes will have to be moved into the region as well. In order to reduce the threat from Libyan air defense systems, there will also be a requirement for electronic warfare capabilities (such as the U.S. Navy EA-6B Prowler platform) to suppress or destroy those air defenses.

Furthermore, in order to reduce the risk to U.S. and allied air crews one would need to stand up a robust combat search and rescue (CSAR) capability, which would include not only helicopters, but also ground forces. If the CSAR was ever needed, it too would require the use of air cover, tankers, AWACS, and electronic warfare capabilities.

Finally, the number of fighter jets required to generate enough sorties to maintain multiple CAPs over Libya would increase substantially should the operation continue for a longer period of time, to take into account the need for maintenance and repairs of aircraft, and required rest for the aircrews.

In addition to these practical considerations, any intervention force must figure out the rules of engagement, and the scope of the operation. This could prove tricky in a situation like Libya’s. Can U.S. and coalition airplanes attack Libyan ground based air defense systems in self defense? Can the same systems (anti-aircraft artillery, for example) be attacked if they are used against the civilian population? What if the Gadaffi regime grounds the air force, but instead uses heavy systems such as mortars and artillery to pound the opposition? Can these ground targets be attacked by U.S. and coalition airpower?

If no-fly zones were established, what does one do if the CAPs prove insufficient? For example, assume the mission was expanded to the targeting and destruction of heavy ground based systems (such as artillery). The Kosovo experience tells us that the sole use of airpower is less effective than promised, and the air campaign over Afghanistan didn’t reach its full potential until ground forces were present and forward air controllers could help lead the overhead air onto their targets. In the case of Libya, then, should U.S. and coalition ground forces be landed onshore to help raise the precision and effectiveness, while at the same time minimizing collateral casualties, of the air strikes?

Even if all these considerations were put aside, there is still the small detail about the mandate for an operation of this kind. Could there ever be a UN Security Council Resolution to this effect? If not, it is difficult to imagine the U.S. going it alone once again in this post-Iraq world for anything less than truly core national interests (democracy promotion in Libya, while not unimportant, can hardly be called a U.S. “blue chip” national interest). Indeed, Secretary of Defense Robert Gates recently told the cadets at West Point that “any future defense secretary who advises the president to again send a big American land army into Asia or into the Middle East or Africa should ‘have his head examined,’ as General MacArthur so delicately put it.”

Putting all this aside, there are of course ways that U.S. and coalition forces could accomplish this mission. For example, the U.S. could send a carrier battle group to the Mediterranean, as well as a Marine Expeditionary Unit (MEU). Those two forces should contain enough fighter jets and all the supporting capabilities needed to provide CAPs over Libya. But now we’re talking substantial U.S. combat power floating around in the Med, at the order of nearly 100 planes, close to 2000 Marines with the MEU and over 5000 sailors aboard the carrier and the surface vessels that go along with it. That is quite the statement from the U.S. government, and one which could unsettle a region that is very sensitive about the U.S. military foot print already there. Such a deployment of U.S. and coalition combat power may even work in Gaddafi’s favor as a propaganda tool (“rally to me, and we will defend against the imperialist invader”). After all, Slobodan Milosevic’s political position was initially strengthened during the Kosovo air campaign in 1999.

Furthermore, no-fly zones may be appropriate in order to manage a long-term strategic challenge (such as how Operations Northern and Southern Watch kept Saddam Hussein in his box between Operation Desert Storm and Operation Iraqi Freedom), but it is doubtful that it can helpfully influence a rapidly changing and dynamic situation such as the current one in Libya. Many have noted that the current uprisings in the Middle East and North Africa are not anti-American, but a large U.S. military presence of the magnitude needed to conduct CAPs over Libya could very well make it into that.

Finally, even if all of the issues detailed above could be solved, the standing up of an operation of this magnitude takes time, so the uprising may be over, for better or for worse, before the first CAP is ever launched. For comparison, it took the U.S. four weeks to launch the invasion of Afghanistan in 2001, and much of the time between 9/11 and the first incursion into Afghanistan was spent sorting out CSAR arrangements, overflight and basing rights, intelligence gathering for initial targeting, and other particulars that go along with launching any expeditionary operation. While establishing no fly zones over Libya will probably not take that long, the first CAP will certainly not be flown the day after the President gives the order.

As a military mission, robust no fly zones are more complicated to achieve than perhaps assumed, and even if established it could prove to be too late. CAPs over Libya may even be counterproductive even if they are established in time to have an effect on the current struggle in Libya. There is much that the U.S. and its friends and allies can do to nudge along the coming of democracy in Libya, but it doesn’t include the use of combat power.