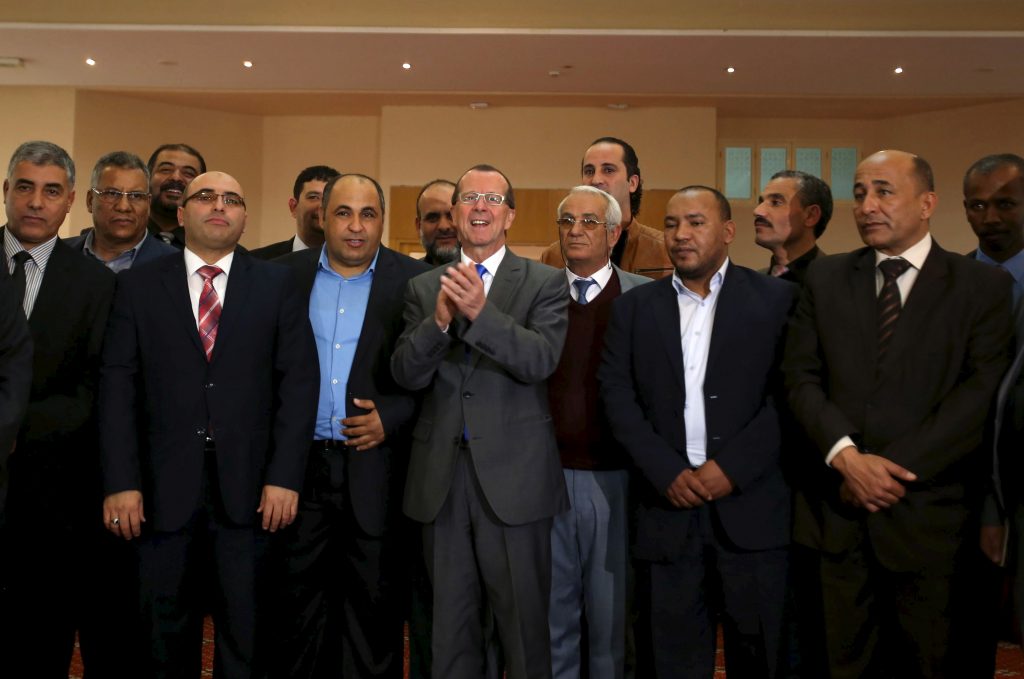 United Nations Special Representative and Head of the UN Support Mission in Libya, Martin Kobler (center), poses with representatives of Libyan municipalities after their meeting in Tunis, Tunisia, on December 21. (Reuters/Zoubeir Souissi)

A UN-brokered Libya peace agreement is hamstrung by security challenges, the uncertainty that it may actually end up producing a third power center in a country that already has two rival governments, and questions about whether the envisaged national unity government would even be able to operate from Tripoli.

But these challenges are not insurmountable. The agreement can succeed if it receives ample support from the international community and if the new government adopts a more inclusive policy, said Karim Mezran, a Resident Senior Fellow in the Atlantic Council’s Rafik Hariri Center for the Middle East.

Western governments will also need to press Libya’s new leaders to be more inclusive by, for example, reaching out to rival militias, former members of Moammar Gadhafi’s regime, and representatives of tribes that were once favored by the late dictator and have been marginalized since the revolution in 2011, Mezran added.

Fadel Lamen, a Nonresident Fellow in the Hariri Center, signed the peace agreement in the Moroccan resort town of Skhirat on December 17 in his capacity as a civil society representative and Chairman of the National Dialogue Commission.

The development is “an important first step,” Lamen said, noting that “majority consensus” had been achieved among the stakeholders, which “creates a good base to broaden the consensus and participation.”

“The need to establish a unified government that can end the duality and stop the country from sliding into total chaos is a must and that’s what was the main goal for the dialogue,” he added.

A shift in strategy

After months of political logjam, the breakthrough in Morocco was precipitated by a shift in strategy by Martin Kobler, the United Nations’ new Libya envoy. Kobler bypassed the legislative bodies in Tobruk and Tripoli after realizing that their leaders were reluctant to support the agreement, said Mezran. Instead, he sought the support of individual members of both bodies as well as civil society representatives.

And so it was that a group of Libyan politicians and civil society representatives signed the agreement. Under the terms of the agreement, the two rival governments—one in Tripoli and the other internationally recognized one in Tobruk—will make way for a national unity government.

Fayaz Sarraj, who represents Tripoli in the Tobruk-based House of Representatives, will lead the new unity government. While his government is supposed to be based in Tripoli, it remains unclear whether that will even be possible.

Kobler may have succeeded in gathering signatories, but factions in Tripoli and Tobruk swiftly derided the deal. The United Nations “changed the game in the final stages” and this has made it difficult for a national unity government to win the support of the Libyan people, said Mezran.

The world body’s image was tarnished when it was revealed earlier this year that its former Libya envoy, Bernardino León, was negotiating the terms of a job with the government of the United Arab Emirates while trying to convince rival Libyan factions to agree to a peace deal.This was controversial because the United Arab Emirates, along with Egypt, supports one of the Libyan rivals—the government in Tobruk—and has provided it military support in violation of a UN arms embargo. Turkey and Qatar have provided similar support to the Islamists in Tripoli.

A bumpy road ahead

“Restarting the economy; securing major cities; controlling, ultimately disbanding the militias and fighting terror will be at the top of the agenda” of the national unity government, said Lamen. As will create stability and predictability, facilitating the return of refugees who are trafficked through routes that head north through Libya en route to Europe, and beginning a process of national reconciliation, he added.

However, the peace deal quickly hit some serious bumps as key players were conspicuous by their absence from the signing ceremony and denounced the deal as one forced upon them by the United Nations.

One of the biggest challenges will be getting the governments in Tobruk and Tripoli to agree to the terms of the deal. “If they don’t agree, then we could end up with three governments,” said Mezran.

The other big challenge relates to security. The absence of a cohesive police force and army underscores the serious security challenges facing the country in which security has become the purview of militia groups that have pockets of influence.

The signatories to the peace deal have minimal control over the militias. “The United Nations is betting that by gathering signatories it will create some pressure on the militias to accept a new government,” said Mezran.

Another challenge will be dealing with influential and at the same time controversial figures such as the anti-Islamist General, Khalifa Haftar, who is popular in the eastern part of the country, but reviled in Tripoli.

It will also be important for regional powers such as the United Arab Emirates, Egypt, Qatar, and Turkey to excise themselves from the Libyan equation, said Mezran.

The national unity government is intended to last for a period of a year after which elections will be held. Mezran warned against getting hung up on elections. “Elections are not a panacea,” he said, “in fact, they can become a problem in and of itself.” The focus, instead, should be on putting a government in place that can deliver security and services, he added.

The rise of ISIS

The Islamic State of Iraq and al-Sham (ISIS) has sought to exploit the post-revolution chaos by putting down roots in Libya. Human traffickers, too, have taken advantage of the lawlessness in Libya to funnel hundreds of thousands of migrants—most of them fleeing the war in Syria—north toward Europe.

Western governments are reportedly eager to get the go-ahead to conduct airstrikes against ISIS in Libya. But it is not clear that Libyans would support foreign military intervention or whether there is even agreement in European capitals for such action, said Mezran.

“Western officials talk about it as an effort against ISIS, but ISIS is only part of the problem,” said Mezran. “The challenge in Libya is putting an end to the civil war, and that requires a comprehensive plan.”

Lamen added: “The international community should be a real [and] lasting partner this time around.”