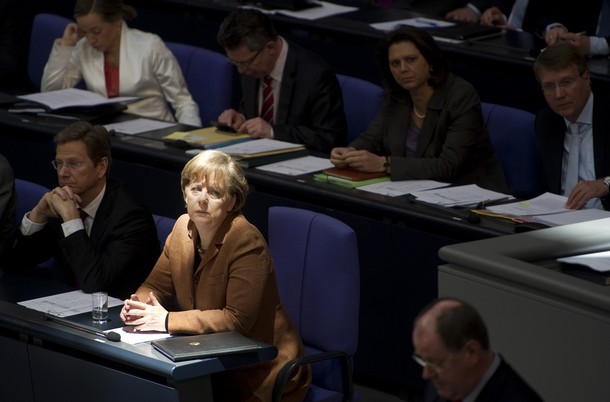 Almost a week after Germany’s abstention in the UN Security Council, the domestic political debate is as heated as ever.

Lothar Rühl, writing in Wednesday’s Frankfurter Allgemeiner Zeitung, summarizes the confusion and disharmony among NATO allies over the establishment and enforcement of a no-fly zone over Libya. And, almost as an afterthought, he claims that Foreign Minister Westerwelle had wanted to vote against tUN Security Council Resolution 1973 before Chancellor Merkel "wrested" an abstention from him.

This article has caused considerable alarm in government circles. The Foreign Ministry labeled it "made-up nonsense" and the Chancery termed it "completely wrong". But Rühl is generally considered well-informed; he was a state-secretary of defense under Chancellor Kohl and knows the inner workings of government. Other news-outlets, such as Der Spiegel, confirm Rühls assessment that Westerwelle planned to instruct his UN ambassador to vote "No" until Merkel convinced him otherwise on Thursday afternoon. And so Germany joined China, Russia, Brazil and India in abstaining.

Germany‘s abstention has been widely criticized by its Western allies as well as domestically. Former Foreign Minister Joschka Fischer, who has largely stayed out of the limelight and refrained from commenting on current policy since leaving office, called the abstention "a scandalous mistake". Not one to mince words, he also accused Westerwelle of vocally supporting the Arab uprisings when it was politically opportune to do so, and of "pulling his tail between his legs when it was time to chose sides in the Security Council."

Fischer is not alone; the list of those criticizing Merkel’s and Westerwelle’s decision is long and runs clear across the political spectrum. Former SPD minister Heidemarie Wieczorek-Zeul, for example, said it was "shameful" that Germany abstained from an effort to protect civilians. And Airbus CEO Tom Enders (co-chair of the Atlantic Council Strategic Advisors Group) today announced he is leaving the CSU.

Over the weekend, criticism also came from within the ranks of the governing CDU-CSU/FDP coalition. Here, the argument goes that Germany’s reservations about possibly being drawn into a war in Africa did not necessary mean it had to reject resolution 1973 and isolate itself. Germany could have followed its moral compass and voted for the resolution without having to put boots on the ground. Ruprecht Polenz, chairman of the Parliament’s Foreign Relations Committee, noted that it is possible to "show solidarity within an alliance without having to be on the front lines of every mission". Former army inspector-general Klaus Naumann opined that Germany’s refusal to go with its allies "shakes the foundations of Germany’s place in the West" and "does not serve Germany’s interests".

The ongoing discussion about Libya, and particularly the dissent from within the coalition, are a significant problem for Merkel. She is already under pressure for her change of course on nuclear power (which also provided welcome fodder for her Social Democrat and Green critics), as well as her change of course in handling the Euro crisis. Spiegel almost feels sorry for her: "The Chancellor seems befuddled these days. Normally seemingly unshakable, she now wavers and sways. Her decisions are driven by events and moods, not by the cool calculation she normally displays". And Germany’s largest tabloid pointedly asks "What price will Merkel pay for her zig-zag politics?"

The answer to that may have to wait until Sunday, when one of Germany’s largest and most affluent states, Baden-Wuerttemberg, holds its state elections. Both Merkel’s CDU and Westerwelle’s FDP are traditionally strong in this state – the CDU has governed uninterrupted for the last 57 years and this is the only state in which the FDP has never missed the 5% hurdle. Now, they are in danger of losing their majority; the Green Party is a serious contender for heading the next state government with the Social Democrats. Polls show that this race is too close to call, but losing this state would be a major blow for CDU/FDP politics on a wide range of issues. Rheinland-Pfalz is also holding state elections on Sunday.

The existential fear of elections has returned some party discipline to the CDU this week. Critics are not speaking up publicly and the party is attempting to present a united front. Journalists’ requests for statements go unanswered. Yesterday’s decision by the government to send a 300-strong reinforcement of the AWACS reconnaissance flights in Afghanistan is designed to show unity with Germany’s NATO allies.

Merkel may have prevented Westerwelle from voting "No" at the Security Council, but she did not manage to prevent the damage to Germany’s reputation and her own position. Now her coalition is scrambling to survive Sunday’s elections. For the time being, Merkel has clamped down on the bubbling dissent of those closest to her. But once the election-induced lid is removed on Monday, Merkel may be in very hot water within her own party.