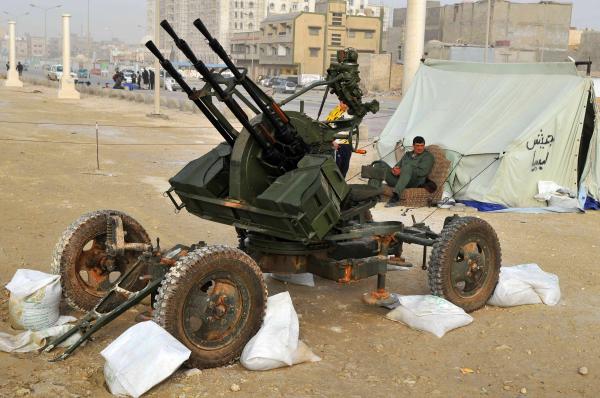 In the wake of a trillion-dollar war that gave Iran more say than the United States in Iraq’s future, and the longest war in U.S. history in Afghanistan that seems headed for another trillion dollars and is yet to shrink the Taliban insurgency, U.S. Defense Secretary Robert Gates wisely said those who would want to take on a third military operation — against Libya’s Col. Moammar Gadhafi — should have their heads examined.

But some hawks are agitating for action against the Libyan pariah, beginning with a no-fly zone. Easier said than done. Gadhafi isn’t friendless. For a couple of hundred dollars a month per volunteer, he can get more mercenaries from African states to his south — Niger, Chad, Mali. Arab governments are anti-Gadhafi but their public opinions still like the cut of his anti-American jib.

In a two-hour live TV peroration broadcast by al-Jazeera in English and in Arabic, Gadhafi excoriated foreign TV news broadcasts like CNN and the BBC. And millions from Yemen to the United Arab Emirates, Qatar, Bahrain, Saudi Arabia, Kuwait, Jordan, Syria, Lebanon, Egypt, Algeria and Morocco thought it was great stuff.

Egypt, heavily dependent on the tourist industry, is already engaged in "de-Mubarakization," synonymous with an anti-U.S. campaign. President Hosni Mubarak’s name was erased from hundreds of schools, hospitals, roads, bridges, military academies. And the deposed president, in power for three decades, is confined to his residence in Sharm el-Sheik while a judicial commission questions him — on the wealth accumulated by him and his family since he succeeded President Anwar Sadat, who was assassinated in 1981.

Lines and allegiances are being redrawn all over the Arab world. This is no time for the United States to get involved in an Arab civil war.

Libya could easily slip into inter-Arab warfare. Nutty though he appeared in his disjointed, two-hour monologue on al-Jazeera, Gadhafi appealed to ignorant masses to join his side against those who are "manipulated by al-Qaida." And the proof he supplied is the U.S. release of Libyans "imprisoned in Guantanamo (Cuba), who made their way back to Libya."

These are the "miscreants," said Gadhafi, who led the attacks that seized control of large segments of Cyrenaica in eastern Libya. U.S. hawks were urging President Barack Obama to line up against Gadhafi’s regular forces, which would then quickly cast the United State in the role of anti-Arab villain.

Both the Spanish civil war (1 million killed 1936-39), which divided both Europe and America between pro-Nazi and pro-Soviet camps, and the 1992-95 Bosnia war that killed about 100,000 civilians and displaced 2.2 million, found the United States on the side of the Muslims. Both are models of how quickly such conflicts can escalate into global crises.

Hence, Gates’ reluctance to get involved. Besides, a no-fly zone over Libya wouldn’t be a matter of a few warplanes flying off an aircraft carrier.

Gadhafi has 227 Russian and French warplanes and batteries of SAM-2 and SAM-6 antiaircraft missiles. Many of the planes can’t fly and those that can could easily be shot down. But it would be a miracle if a U.S. aircraft didn’t get shot down by a salvo of missiles, which would quickly escalate the conflict.

Gadhafi’s retaliatory capabilities aren’t harmless. They would have to be neutralized before a NFZ could be initiated.

Moving additional military assets into the region — e.g., NATO base in Sicily — would have immediate negative consequences on the war in Afghanistan and cut back on U.S. naval deployment in the Persian Gulf and the Gulf of Aden.

The aircraft carrier USS Enterprise and its escort vessels were on their way south through the Suez Canal and the Red Sea to relieve the USS Carl Vinson on station in the Gulf of Aden when they were ordered back to the Mediterranean close to the Libyan coast.

Today, a NFZ over Libya would require assistance from Britain, France and Italy. Britain, under defense cutbacks and Afghan commitments, made clear it couldn’t participate. France and Italy have long cultivated close relations with Gadhafi and aren’t interested in squeezing him.

A NFZ, said Gates, begins with an attack on Libya to destroy its air defenses — i.e., an act of war. Joint Chiefs Chairman U.S. Navy Adm. Mike Mullen added an NFZ is "an extraordinarily complex operation to set up." The U.S. Senate resolution played it safe; it called on the U.N. Security Council to impose a NFZ over all of Libya." The chances of this being approved ranged from nil to zero.

Meanwhile, Libya is on the edge of a full blown civil war. And Gadhafi has the wherewithal to reconquer the eastern half of the country. But it will be a long drag-out fight.

Libya pumps less than 2 million barrels of oil a day, most of it for Western Europe. Saudi Arabia has signaled it will increase from its current 8.5 million barrels to 10 million or more to keep the global flow even. But speculation is already rife. In Washington, some gas stations are posting prices of $4.55 a gallon.