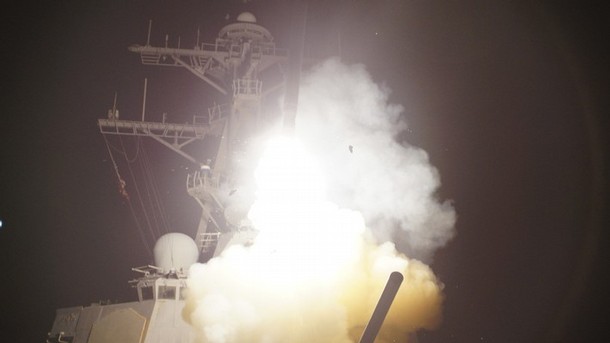 Are we becoming the tribe that lost its head?

The war to get rid of Moammar Gadhafi, the Libyan fashion plate wreck, is already running $100 million a day. The White House says it isn’t planning to request emergency funding — at least not yet. The Pentagon will have no choice in the matter. It will have to request supplemental funding when the meter hits $1 billion. In 10 days, that is.

But what’s $1 billion when we owe China $1.3 trillion — and the national debt meter keeps running at the rate of $4.12 billion a day, for a current total of almost $15 trillion. Federal spending is up to $3.5 trillion this year with a deficit of $1.3 trillion.

America’s third war in 10 years could quickly swallow all recent budget cuts. The Tomahawk missile, depending on number of bells and whistles, costs the Pentagon between $600,000 and $1.5 million per kinetic hit. Its pinpoint accuracy can take the weapon through a building’s specific window but not through Gadhafi’s underground maze where he has stashed almost $7 billion worth of gold bullion.

The Arab League was aboard the operation the first day, then jumped ship the second day only to be rescued and back aboard the third day. Arab League Secretary-General Amr Moussa couldn’t figure out what would best serve his campaign to become Egypt’s next president. And U.S. President Barack Obama was on the sombrero circuit listening to "ole" in three Latin countries while the dates hit the fan in Libya.

Obama’s coterie of doves was a kettle of hawks in disguise during his absence. Susan Rice, the U.S. ambassador to the United Nations, didn’t look comfortable in the sudden role of martinet. "We need to be prepared," she thundered, "to contemplate steps that include, but perhaps go beyond, a no-fly zone at this point, as the situation on the ground has evolved, and as a no-fly zone has inherent limitations in terms of protection of civilians at immediate risk."

It was a rock-solid formula for quagmire.

We now have another divided country where we have given our blessings to a new set of players in Benghazi that could be, for all we know, admirers of Osama bin Laden or Hezbollah, or the Muslim Brotherhood — or Iran’s theocrats.

America’s vital strategic interests are in the Persian Gulf, not Libya.

The naysayers at the Council of Foreign Relations were almost unanimous in rejecting what they considered a harebrained venture.

CFR President Richard N. Haass called it, "Too much too late."

"The United States has now embarked on its third war of choice in less than a decade. And like the 2003 Iraq war and the Afghan war after 2009, this war of choice is ill-advised," said Haass.

"It was John Quincy Adams who, some two centuries ago, warned that the United States should not go abroad in search of monsters to destroy," said Haass, "He was right then. He is no less right today."

Former CFR President Leslie H. Gelb added: "The reason why neither President Obama nor his coalition partners in Britain and France can state a coherent goal for Libya is that none of them have any central interest in the outcome. … It is only when a nation has a clear vital interest that it can state a clear objective for war. They’ve all simply been carried away by their own rhetoric."

Master strategic thinker Anthony Cordesman (of the Center for Strategic and International Studies) pointed out the obvious that had apparently eluded the White House, "The use of armed force to intervene in Libya still has no clear, meaningful strategic objective." He sees three uncertain outcomes with no predictable "End Game" or "Steady State" result:

1. A divided group of rebel factions, neutrals and former Gadhafi loyalists with no experience in politics, democracy and governance takes over with almost totally predictable effects."

2. "Mission confusion" is now even more of a risk than "mission creep." If the no-fly zone is literally enforced as a "no-fly zone," it is far from clear that the rebel factions can survive, much less win.

3. There is no clear winner. Libya divides for an unpredictable amount of time into two hostile zones with either a front or cease-fire line and a political and economic struggle goes on with periodic episodes of violence.

Geopolitics doesn’t appear to be our strong suit. We went to war in Iraq dismissing the best advice we were getting to keep the war short — and possibly sweet. We dismantled both the Baath party and the army, instead of simply firing 50 to 100 officials and generals at the top of each institution.

That little mistake cost us $1 trillion and a seven-year war. It also gave Iran more influence than the United States in Iraq.

Afghanistan was tailor-made for a SOCOM war — Special Operations to rid the country of Taliban and al-Qaida. Now, in its 10th, year, the Afghan war has cost $500 billion — half a trillion dollars — and we still cannot see light at the end of the tunnel for another three years.

A ray of strategic sanity shone through with the Century Foundation’s prestigious task force report on the way out of the Afghan war released this week.

"The odds may be long that approaches outside official channels will bear fruit," said the signatories, "but, on the other hand, the stakes are high and the need acute."

The alternative is "a protracted and interminable war that neither Afghans nor Americans nor Pakistanis nor Europeans nor anyone else will want or can afford."

Follows a complex diplomatic choreography with multiple players more suited for protracted negotiations than for a rapid denouement that all parties now seek. The Taliban left al-Qaida 10 years ago. And the Taliban are now ready for direct negotiations with the United States.

Arnaud de Borchgrave, a member of the Atlantic Council, is editor-at-large at UPI and the Washington Times.  This column was syndicated by UPI. Photo credit: Reuters Pictures.