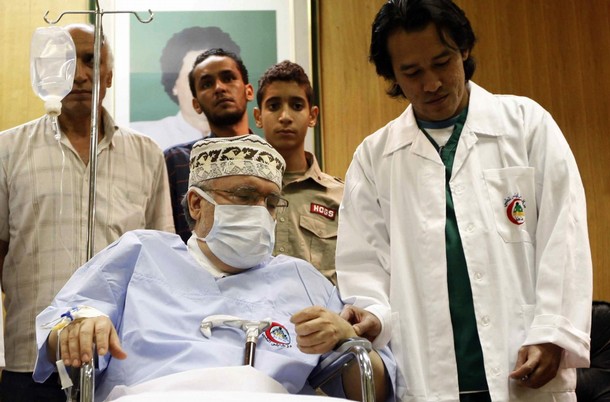 First things first: it is extremely inconvenient, even embarrassing, that Abdelbaset Ali al-Megrahi is still alive nearly a year after he was released from Greenock Prison on the grounds that he was believed to have not much more, and perhaps fewer, than three months to live. Nevertheless, the fact that he has lived longer than expected does not advance or give any greater credence to the notion that there was some conspiracy designed to free him come what may and regardless of any other considerations.

Nor is there any evidence, despite recent press reports, that BP (everyone’s favourite whipping boy now) played any role in Kenny MacAskill’s decision to send him back to Libya. One may reasonably think, as the British government does, that MacAskill’s decision was a mistake but that does not mean that, as matters were understood at the time, the Justice Secretary was either wrong or acting on behalf of other interests.

I’d go further: the fact that Megrahi is still alive does not enhance conspiracy theories, it makes them even less probable than their previous improbability suggested. But, wait, there’s an oil company "involved"! And it’s BP! QED!

There are two seperate issues that, unfortunately, continue to be conflated by people who ought to know better. Unsurprisingly this company includes several members of the United States Senate whose grandstanding is equalled only by their ignorance. Senators Schumer, Gillibrand, Lautenberg and Menendez have written to Hillary Clinton demanding some kind of pointless investigation into "links" between BP and the decision to release Megrahi.

Unfortunately their request is predicated upon nonsense and, for that matter, riddled with errors. Among them:

1. No "Scottish court" ordered that Megrahi be released. It was a matter for the Justice Secretary and him alone.

2. The prognosis given by Karel Sikora and the other doctors paid by the Libyan government played no part in MacAskill’s decision. He never saw Sikora’s report. The decision was made on the basis of reports compiled by Dr Andrew Fraser, the senior doctor in the Scottish Prison Service. These drew on the findings of at least two other independent consultants.

Still, given the inaccuracies contained in media reports, one can see why the Senators are so mistaken. John F Burns is a great journalist but the opening paragraph of his most recent New York Times report helps demonstrate why so many people remain so confused:

The oil giant BP faced a new furor on Thursday as it confirmed that it had lobbied the British government to conclude a prisoner-transfer agreement that the Libyan government wanted to secure the release of the only person ever convicted for the 1988 Lockerbie airliner bombing over Scotland, which killed 270 people, most of them Americans.

But a Prisoner Transfer Agreement says nothing about releasing prisoners. On the contrary it is, as the name suggests, an agreement about transferring inmates from prison in one jurisdiction to prison in another. That is, even the Libyans weren’t lobbying for Megrahi’s release. They merely wanted him to be eligible to be transferred to a Libyan gaol where he could serve the rest of his sentence.

So what do we have here? Let’s review the matter one more time:

1. Libya and the UK wanted to sign a PTA as part of the normalisation of relations between the two countries.

2. Libya made it clear to BP that a PTA would help BP’s commercial interests in the Gulf of Sidra.

3. BP also pointed out to HMG (Her Majesty’s Government) that signing the PTA would be very useful.

4. The Scottish Government was keen to exclude Megrahi from the terms of any such agreement.

5. The Libyans told London that it would be absurd to have a PTA that excluded the only high-profile Libyan in British custody.

6. Despite Edinburgh’s concerns, London came around to agreeing with the Libyans and so, when signed, the PTA contained no  clause excluding Megrahi from its provisions.

7. Signing the PTA most probably did help BP’s commercial interests in Libya. Then again, BP’s initial deal with Libya was signed in 2007 – well before any of the Megrahi business came to a head and well before there could be any consideration of releasing him.

8. So what if BP did benefit? The existence of the PTA did nothing to improve Megrahi’s chances of being released. (Here I would note that Edinburgh’s desire for a Megrahi Exception made little sense since the decision on his future would, as it always had been, remain a matter for Edinburgh. London gave Tripoli something Tripoli wanted badly but London did not have to give up anything in return since, again, what Tripoli wanted was not in London’s gift.)

9. Libya made an application to the Scottish Government asking that Megrahi be transferred to serve the remainder of his sentence in a Libyan prison.

10. The Scottish Government considered this application and then, based in part upon its understanding that assurances had been given to the United States that Megrahi would serve his entire sentence in Scotland, rejected Libya’s application.

11. Again, signing a PTA with Libya – which London was keen to do – is an entirely seperate issue from the decision to free Megrahi on compassionate grounds.

12. We are now in the odd position that those who think there was a conspiracy need Megrahi to live for years while those who think MacAskill made the decision honestly would be relieved if he died next week.

13. Not a single credible report has emerged disputing that MacAskill made his decision according to the medical facts as he saw and understood them at the time.

14. The fact that Megrahi has "outperformed" medical expectations says much more about medical science than it does about Kenny MacAskill.

15. If much of the press reporting is to be given credence we are asked to suppose that MacAskill would have released Megrahi come what may. This, of course, is because of BP and HMG and all the rest of it. But for this to be true we have to believe that if the doctors had said Megrahi’s prostate cancer was not so serious and he’d live for another year at least MacAskill would have said, "Well that doesn’t matter I’m going to release him anyway and so what if this rides roughshod over both established practice and the law? I want to be a Big Boy playing on the big stage." I suggest that this is implausible.

16. For there to be a conspiracy we need to believe that two (three if you include Libya) jurisdictions were involved and that this included several government departments and the Scottish Prison Service and at least two independent consultants. And BP of course. Again, I suggest that this is not credible. For a conspiracy to have any credence you need to believe that Edinburgh was determined to release Megrahi at any or all costs. There is precisely zero evidence to support this notion.

None of this means there aren’t perfectly good grounds upon which to oppose or criticise MacAskill’s decision. Good people may disagree in good faith upon this question. But that’s a long way from supposing that there was some conspiracy or that the medical evidence was fabricated or that BP was secretly running the entire show.

[My] blog’s Lockerbie archive is here and, more or less, I stand by pretty much everything I wrote nearly a year ago. Megrahi’s survival is inconvenient and, yes, embarrassing but that doesn’t mean there was any conspiracy to release him. Nor does it in and of itself suggest that MacAskill was acting in anything other than good faith at any point in proceedings.

Yet, again, for there to have been a conspiracy you need to believe that if the doctors had told MacAskill that Megrahi would live for another year he’d have been released anyway. Never mind that, as I understand it, this would have been beyond his purview it makes no sense even if you want to believe in it.

You can certainly argue that convicted terrorists should never be released but that’s an entirely different question. But cock-up – or rather the vagaries of medical prognosis – is a likelier explanation of all this than conspiracy not least because there is precisely no evidence of there being any conspiracy.

Alex Massie is a journalist based in Scotland and contributor to the Atlantic Council. He has also written for The Scotsman, The Daily Telegraph, The New Republic, National Review Online, The Sunday Telegraph, Scotland on Sunday, and The Sunday Business Post. This article was first published on The Spectator web site. Photo credit: Reuterts Pictures.