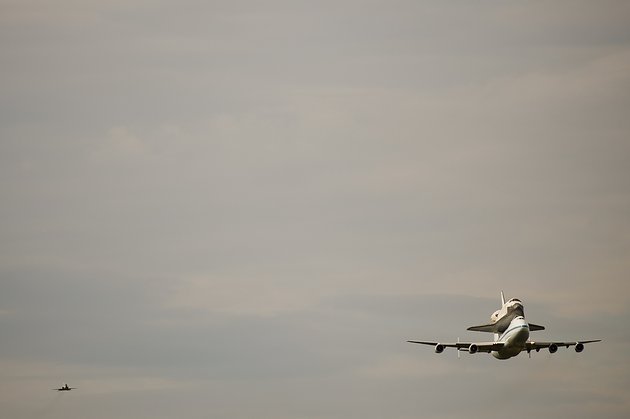 The Space Shuttle Discovery flying piggyback on a Boeing 747 for its “Last Hurrah” flight around the Washington Monument and the White House was a grim reminder of misplaced and misspent priorities.

The storied 30-year space shuttle program, which began with the launch of Columbia, April 12, 1981, ended last July, when Atlantis landed back on Earth. Since then, the price of a Russian taxi ride aboard the Soyuz to reach the International Space Station has skyrocketed from $55.8 million per seat — with a guarantee of no less than six trips to 12 round trips — to $63 million per seat, in 2013-14.

It was the shuttles — Columbia, Challenger, Discovery, Endeavour, Atlantis — and the 355 crew members who flew 135 missions over 30 years that built, hunk by hunk, the football field-sized lab in Earth orbit and launched the Hubble Space Telescope that allowed humanity to see billions of times farther into space than we ever could before.

The program’s shutdown comes after blowing $1 trillion on the Iraq war that put Iran’s mullahs in the driver’s seat in Baghdad, and half a trillion dollars (and counting) in Afghanistan, where the Taliban enemy, taking a page from the U.S. defeat in Vietnam, surprise-attacked several widely scattered targets simultaneously,

The longest period of war in U.S. history, with its grim toll of 6,345 U.S. troops killed and 46,300 wounded in both Iraq and Afghanistan, unlike World War II, did not produce hosannas of praise and gratitude. Hundreds of thousands of Iraqis and Afghans are also dead, and still more injured. By Afghan exit time in 2014, the two wars will have cost the U.S. taxpayer $3 trillion.

Future historians will shake their heads in disbelief over the trillions thrown at Iraq and Afghanistan with very little to show for it — except the biggest U.S. Embassy in the world in Baghdad, one originally built for 2,000 U.S. diplomats in residence (vs. 87 next door at the U.S. Embassy in Ankara, Turkey). Today, the Baghdad site is an embarrassing white elephant.

These delusions of grandeur were inspired by President Bush 43, who thought we had gone to Iraq to punish Saddam Hussein for trying to kill his dad. To this day, he does not seem to realize that Dick Cheney was both vice president and White House svengali. Iraq was a sleight of hand, for a different agenda.

This reporter was present at the vice president’s house for dinner 11 months before the invasion of Iraq, when the Iraq operation was described to me as “a done deal.” It was to be part of a larger geostrategic plan known as the “Clean Break” report written in 1996 by a study group of American “neocons,” chaired by Richard Perle, for Benjamin Netanyahu, about to become prime minister of Israel for the first time.

Discovery’s last journey to the Air and Space Museum (Washington Dulles International Airport branch) was a grim reminder of where history may say we took a wrong turn.

What elicited the admiration of the world were not U.S. feats of arms in Vietnam, Iraq or Afghanistan (where 70 percent of Americans say we don’t belong), or a “securing the realm” plan for Israel, but the way we defeated the evil Soviet empire without war, along with displays of technological prowess and humanitarian assistance. The U.S. also launched the first American female and the first black astronauts into space.

Decades after John Glenn rocketed into space on the first American manned orbital mission, he added another milestone to space history in 1998 when at the age of 77, he returned to space — as a payload specialist aboard Discovery.

During the 213-hour flight, he participated in multiple experiments on the aging process in space to countering the effects of old age on Earth. A tad more useful for humanity than fruitless attempts to democratize Afghanistan.

All we need from Taliban chieftain Mullah Omar is a pledge to sever any link with al Qaeda terrorists. He did that three months before 9/11 — but we still don’t believe him. So why not test him instead of wasting blood and treasure through the end of 2014?