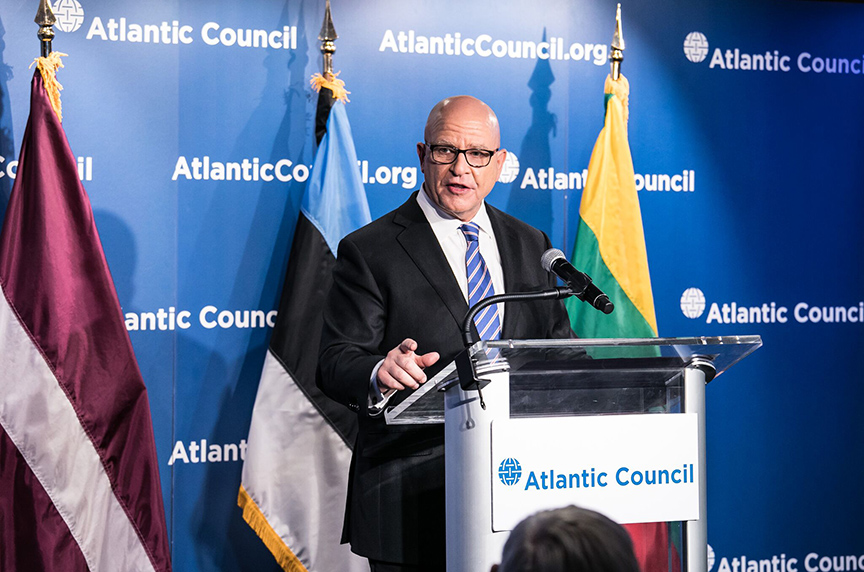 US President Donald J. Trump assured the leaders of the Baltic states—Estonia, Latvia, and Lithuania—at a White House meeting on April 3 that no one has been tougher on Russia than him.

Hours later, he was almost upstaged by his outgoing National Security Advisor LTG H.R. McMaster who delivered a blistering rebuke of Russia in remarks at the Atlantic Council. McMaster said that the West has “failed to impose sufficient costs” on Moscow for its aggressive behavior that has ranged from cyberattacks to near-fatal poisonings.

“Russian aggression is strengthening our resolve and our confidence. We might all help Mr. Putin understand his grave error,” McMaster said, referring to Russian President Vladimir Putin.

McMaster spoke at a dinner hosted by the Atlantic Council for the leaders of the three Baltic states. These were his last public remarks before leaving office. He will be replaced by John Bolton, a former US ambassador to the United Nations who is well known for his hawkish foreign policy views.

Trump, whose presidential campaign is the focus of an investigation by Special Prosecutor Robert S. Mueller III into links with Russia, was quick to congratulate Putin over a flawed election victory last month and even invited the Russian president to Washington. In his remarks at a joint press conference with the Baltic leaders on April 3, Trump said he thinks that he could have a “very good relationship” with Putin.

Those prospects would seem bleak given McMaster’s assessment.

McMaster contended that the West is engaged in a “fundamental contest between our free and open societies and closed and repressive systems.”

In a clear reference to Russia, he added: “Revisionist and repressive powers are attempting to undermine our values, our institutions, and our way of life.”

McMaster went on to list a series of Russian aggressions, including hybrid warfare that he described as “a pernicious form of aggression that combines political, economic, informational, and cyber assaults against sovereign nations.”

“Russia employs sophisticated strategies deliberately designed to achieve objectives while falling below the target state’s threshold for a military response,” he said, noting that these tactics include “infiltrating social media, spreading propaganda, weaponizing information, and using other forms of subversion and espionage.”

“For too long, some nations have looked the other way in the face of these threats,” he said. “Russia brazenly and implausibly denies its actions and we have failed to impose sufficient costs. The Kremlin’s confidence is growing as its agents conduct their sustained campaigns to undermine our confidence in ourselves and in one another.”

In March, a former Russian double agent, Sergei Skripal, and his daughter, Yulia, were poisoned in the United Kingdom using a military grade nerve agent that was traced back to Russia. The incident promoted the British government to expel twenty-three Russian diplomats triggering tit-for-tat expulsions, which also included the expulsion of sixty Russian diplomats from the United States.

McMaster said Trump’s decision to order the removal of dozens of Russian intelligence officers and close the Russian consulate in Seattle “will also help protect our democratic institutions and processes, as these Russian officers orchestrate Russia’s sustained campaign of propaganda, disinformation, and political subversion.”

McMaster called the poisoning an “assault on the United Kingdom’s sovereignty,” a clear violation of the Chemical Weapons Convention, and the first offensive use of nerve agent in Europe since World War II.

The Trump administration has concluded that Russia was also responsible for massive cyberattacks—NotPetya and an attack on critical US infrastructure, including the energy sector.

Russia has also conducted numerous intercepts of US, allied, and partner aircrafts and vessels in the Nordic-Baltic region threatening freedom of navigation and endangering our personnel, said McMaster.

“Mr. Putin may believe that he is winning in this new form of warfare. He may believe that his aggressive actions in the parks of Salisbury, in cyberspace, in the air, and on the high seas can undermine our confidence, our institutions, and our values,” said McMaster.

“Perhaps he believes that our free nations are weak and will not respond to his provocations,” he said. “He is wrong.”

The Trump administration has imposed sanctions on Russian individuals and organizations in response to Russian meddling in the 2016 US election and cyberattacks, including attempts to the hack the US energy grid.

The United States has also substantially increased funding for the European Deterrence Initiative, which provides billions of dollars to US military and allied forces in Europe to deter Russian aggression and prevent conflict, said McMaster.

“So we are acting, but we must recognize the need for all of us to do more to respond to and deter Russian aggression, especially in four critical areas,” he added.

These four areas, he said, are: counter Russian cyber warfare by integrating military, political, and informational instruments of power; invest in cyber infrastructure; share burden of defense, which means all NATO nations must honor the target of spending 2 percent of the GDP on defense; and realize that “all of our actions depend on preserving our strategic confidence.”In an earlier panel discussion, the leaders of the three Baltic states—Estonia, Latvia, and Lithuania—said that they would like a “long-standing” US troop presence in their region to help them stand up to the threat posed by a revanchist Russia.

“We hope that US forces’ presence in our region will continue… it will be a long-standing presence,” said Latvian President Raimonds Vējonis. “We can find different words” to describe this troop presence, he added, noting the sensitivity of the issue.

“For all three Baltic countries, the US forces’ presence in our region is one of the key and most important factor for us,” he added.

Security was high on the agenda when Trump met the leaders of the three Baltic states at the White House on April 3.

All four presidents affirmed their commitment to Article 5 of the Washington Treaty, which states that an attack on one NATO member will be treated as an attack on the entire Alliance.

The White House said it will provide the Baltic states with nearly $100 million to procure large-caliber ammunition and over $70 million in train-and-equip programs to build the capacity of military and security forces of the three nations.

US forces take part with Baltic troops in training exercises, including SABER STRIKE and BALTOPS. The White House said that more than 5,000 US troops will join multinational forces in the SABER STRIKE exercise later this year, the largest event of its kind to take place in the Baltic region.

In 2017, Russia conducted a massive and provocative military exercise—known as Zapad—that involved by some estimates up to 100,000 troops.

“It is a huge amount compared to the number of soldiers in our national armies,” Vējonis said, referring to the Zapad troop levels.

“The presence of NATO forces in our region is very crucial for us,” he added.

Linkevičius said: “Help us to protect ourselves.” He sought US leadership in shaping NATO’s agenda and support to fill the Baltic states’ defense capability gaps.

Kaljulaid said the Baltic States currently lack the technical ability to avoid an A2/AD [anti-access/area denial] situation. “We need to be able to reach the Baltic states by airplanes if there is a need,” she said.

“The A2/AD bubble is something we need to prick,” she added.

Further, Kaljulaid said, in the past things have gone wrong when Russia has thought that the unity of the West is cracking. “We must absolutely stick together,” she said.

Image: “Russian aggression is strengthening our resolve and our confidence. We might all help Mr. Putin understand his grave error,” US National Security Advisor LTG H.R. McMaster said at the Atlantic Council on April 3, referring to Russian President Vladimir Putin. (ImageLinkPhoto.com)