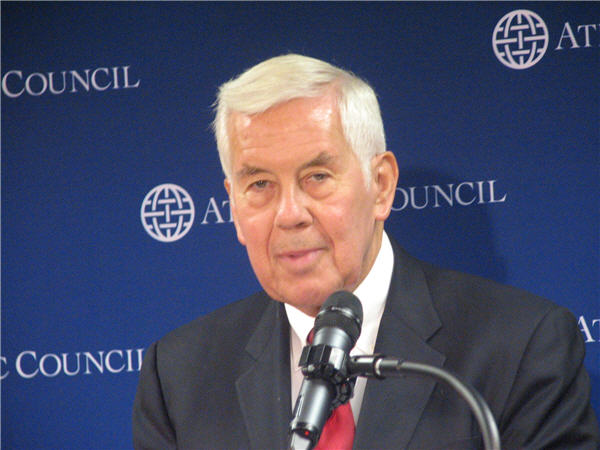 He argues, not unreasonably, that “that there was little distinction between an energy cutoff and an armed invasion. A shutdown of natural gas supplies to a nation in the middle of winter could cause death and economic calamity on the same scale as a military attack.” Beyond that, he contends, “Merging energy support into NATO’s core mission would also strengthen Alliance cohesion and reinforce public support for the alliance. The challenge of securing stable, affordable energy supplies is one that looms at the top of every ally’s agenda, cutting across the fields of transportation, industrial, environmental, and national security policy.”

Lugar has been in high political office since 1968, so he’s by no means blind to the realities. He acknowledges that, at this point, the proposal is unlikely to “be immediately embraced by many Alliance leaders” but believes it will “stimulate more thought about how NATO and other European institutions could achieve collective solutions to energy insecurity.” That’s a noble and important goal, indeed.

Still, it may be a non-starter as more than a launching point for discussion. Indeed, Lugar himself noted that “This challenge is magnified by the fact that most of our domestic constituencies no longer perceive our security and way of life to be under imminent threat.”

Even under the narrow confines of military attack, many of the Allies have lost faith in Article V’s deterrence value. The Russian invasion of Georgia — mere months after being promised certain membership in the Alliance at Bucharest — was an eye-opener, with many key NATO leaders suddenly realizing the implications of admitting states to a military alliance they were not prepared to go to war over. The conflict in Afghanistan, the first actual invocation of the “an attack on one is an attack on all” measure in NATO’s history, has long been losing support in most of the 27 capitols of the Alliance.

Given that context, it’s difficult to imagine that the UK or France — much less the United States and Canada — would be willing to risk war with Russia over cyber attacks in Estonia or disputes over gas prices that got ugly.

Still, the discussion itself is vital as NATO undertakes the review for its new Strategic Concept. Article V was written in a time when Soviet tanks coming across the Fulda Gap was considered the main conventional threat. What exactly does it mean in the present day? Would, for example, an invasion into a breakaway republic, as happened last August, trigger an automatic military response? Or just a discussion about possible options?

While most proponents of deterrence theory argue that some ambiguity is useful — both for creating doubt in one’s adversary and not giving tacit permission to do everything on the other side of a “bright line” — members of a security alliance should have some idea of what guarantees their participation confers. And those expectations must be factored into both resourcing and membership expansion decisions.