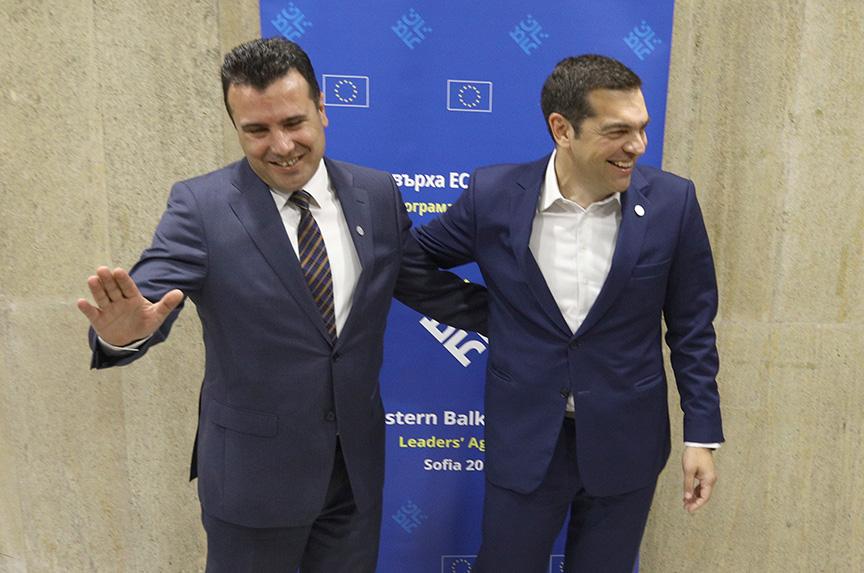 Greek Prime Minister Alexis Tsipras (right) met Macedonian Prime Minister Zoran Zaev at the EU-Western Balkans Summit in Sofia, Bulgaria, on May 17. The two leaders announced on June 12 that they had reached an agreement on a deal to end their twenty-seven-year name dispute. (Reuters/Stoyan Nenov)

In the midst of a news cycle dominated by the historic summit between the United States and North Korea, one might be forgiven for overlooking the news of another diplomatic triumph. On June 12, the prime ministers of Greece and Macedonia announced that the two countries had reached agreement on a deal to end their twenty-seven-year name dispute. Make no mistake, this is a significant milestone for both countries that will not only resolve a contentious issue, but could also set a precedent for a more stable region embedded in Euro-Atlantic institutions.

The decades-long impasse stemmed from a disagreement over the use of the name “Macedonia” to refer to the Western Balkan country that achieved independence from Yugoslavia in 1991 and shares its appellation with a region in Northern Greece. Many Greeks believe that the name implies ambitions on Greek territory and appropriation of the Hellenic identity; the resulting stalemate has tainted the relationship between the two countries ever since.

The disagreement is not simply rhetorical. Greece’s exercise of its veto power as a NATO and European Union (EU) member state has prevented its neighbor from joining either institution. The country was welcomed into the United Nations, but only under the Greek condition that it be referred to as the Former Yugoslav Republic of Macedonia (FYROM), rather than its constitutional name, the Republic of Macedonia.

The deal, announced at a press conference by Macedonian Prime Minister Zoran Zaev and later in a national television broadcast by Greek Prime Minister Alexis Tsipras, establishes that the country will be renamed Severna Makedonija (“Republic of North Macedonia”), and asserts that the name does not imply any claim to the cultural heritage or identity of the Greek region.

Assuming the deal holds, it will represent one of the greatest wins for diplomacy in the post-World War II era. In the near term, the agreement will pave the way for Macedonia’s long-standing aspirations to join NATO and the EU. The EU could agree to formally open accession negotiations as early as the European Council summit on June 28-29. If Greece removes its veto in time for the upcoming NATO summit on July 11-12, it will eliminate the final obstacle to Macedonia’s NATO membership and complete a process that has been on indefinite hold since the Bucharest summit in 2008.

Over the long run, the deal will help to stabilize a region whose essential identity abroad is typically equated with ethnic conflict, economic struggles, and geopolitical crises requiring foreign involvement. US and European diplomats played a key role in tirelessly pressuring both countries to resolve their differences, yet the agreement was ultimately achieved through a process led by Greece and Macedonia, with regular meetings between the two countries at the foreign minister and head-of-government level. This is a significant step for the Balkans, and one that will send an important signal to the international community. With the right amount of political will combined with leaders who are ready to tackle the toughest challenges, it is indeed possible for conflict resolution to be driven from within the region, supported—but not controlled—by external actors.

US and EU officials were quick to praise the announcement. However, as the initial elation of the announcement fades, the coming days could yet deliver difficult hurdles.

Greek nationalists who oppose the deal will argue that any use of the name “Macedonia,” even with a qualifier, remains unacceptable; and in Macedonia, many opponents are likely to object vehemently to the Greek requirement that the country’s constitution be amended. Both Zaev and Tsipras face fierce opposition from opposing parties and factions. VMRO-DPMNE, the conservative party of former Macedonian Prime Minister Nikola Gruevski, decried the deal as a surrender to Greece, and Macedonian President Gjorge Ivanov himself has railed against the idea of constitutional change.

Tsipras must navigate similarly rough domestic waters. Within Greece’s ruling coalition, Tsipras’ Syriza party has been unable to secure the support of its coalition partner, the Independent Greeks, foreshadowing a political scramble over the next months as Tsipras seeks the backing he needs to ensure ratification in the Greek parliament.

Perhaps more concerning is uncertainty over the potential outcome of a referendum on the name deal in Macedonia, tentatively scheduled for September or October. Zaev’s greatest challenge over the next several months will not be international in nature, but rather to convince his own people to accept the solution that the government has put forward. It would represent an embarrassing failure of both governments and the international community to invest so heavily in a successful resolution of the name dispute only to have the result rejected by the countries’ citizens.

Past experiences in the Balkans suggest that it is perhaps unwise to give too much credit when so many things could derail the process. Despite this, the June 12 agreement is a breakthrough that should not be underestimated. If Tsipras and Zaev can successfully stay the course, they will be responsible for opening up a new era for Balkan relations and will cement their own global legacies in the process.