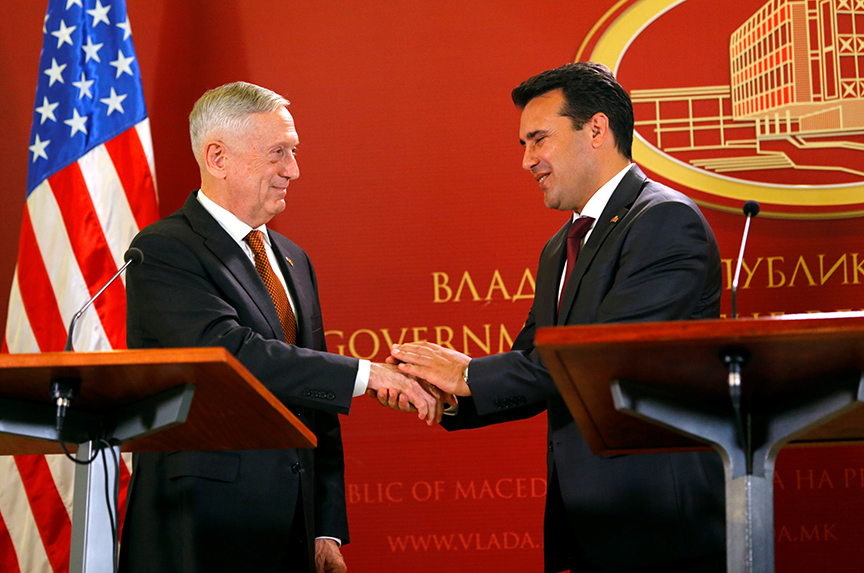 While much of the United States was focused on uppercase Fear (the book) and lowercase fear (the hurricane), Defense Secretary James Mattis was going about business as usual, making the United States safer and stronger (we’ll get to more competitive in another column).  On September 17, he touched down in Macedonia to reaffirm US support for NATO and Macedonia’s bid for membership.

More importantly, Mattis sent a strong signal to the world that Washington still stands firmly behind international institutions based on acceptance of common democratic principles and the free market.  His visit drew attention to Macedonia’s bid for membership—a vote of confidence in collective security. It is the requirement for NATO’s collective security that all countries aspiring to membership resolve internal conflicts as well as those with their neighbors.  Expanding NATO brings peace and stability—the key rationale for becoming a member.  This is even more compelling for the Balkan states, which experienced ethnic and interstate wars as recently as about two decades ago.  Indeed, I was in the Macedonian capital of Skopje in August celebrating the anniversary of the signing of the Ohrid Agreement in 2001, which brought an end to ethnic war in Macedonia between Slavic and Albanian fighters.

Mattis is also pushing back against regional bullies and autocrats—in this case Russia—in defense of the sovereignty of small, poor European states like Macedonia and their larger neighbor Greece.

Macedonia was almost admitted into NATO in 2008, but Greece blocked its admission over concern that its name signaled an intent to challenge Greek sovereignty over its northern province with the same name and an appropriation of Greek history (the ancient Greek Macedonia was the center of Alexander the Great’s empire).  The NATO compromise was to offer Macedonia membership upon a joint Greek-Macedonian resolution of the name issue. For a decade, politics in the two countries mitigated against progress, but in June of this year Alexis Tsipras’ Syriza-led government in Greece and the new Macedonian government led by the longtime opposition leader Zoran Zaev came to an agreement. The so-called Prespa Agreement signed on the banks of the eponymous lake compromised on a new name for the Macedonian state—the Republic of North Macedonia.

The Macedonian people face a September 30 referendum on accepting this name as a precondition to NATO membership.  The referendum is non-binding, but being watched carefully by the Macedonian and Greek parliaments which must ratify the name change before Macedonia can become NATO’s thirtieth member. There is evidence the Russian government is interfering in the run-up to the referendum, attempting to rally opposition, much as it tried to derail Montenegro’s membership bid just a few years ago—although unlike in Montenegro, there is no evidence Moscow has tried to assassinate the prime minister.

More disturbingly, the Macedonian majority Slavic VMRO-DPMNE party, now in opposition, is maintaining a grudging silence, which is essentially a tacit opposition to the referendum and NATO accession under the leadership of Zaev’s party.  These opposition leaders quietly confided to me and other Westerners in August that Macedonia can try again later if the referendum fails and parliament is unable to ratify the name change. This argument puts party over country and risks Macedonia’s security and future prosperity.  Greece and NATO are ready to act now; there is no reason to believe if they are spurned, either party would be willing to try again anytime soon.  Moreover, the ethnic Albanian parties—in the governing coalition and in opposition—are fully in favor of the referendum and NATO membership.

If the Macedonians fail to join NATO now, it will shake confidence in Balkan stability in the region—where ethnic tensions remain in Bosnia and Kosovo—and beyond.  A failed referendum will be a loss for stability, exacerbating and creating new tension in light of the ethnic Albanian position on NATO.  A no vote would be a defeat for democracy—it is after all democracy NATO collective security aims to defend. And this defeat will be a win for Moscow, which regards everything as a zero-sum struggle for regional power and is adamantly opposed to any NATO expansion, even to Macedonia, which has no contiguous borders with Russia.

Mattis should tell the Macedonian people that the world is watching. Despite the rise of nationalism and protectionism—a rise led by fear and irresponsible politics—Macedonia offers another example.  It provides an answer to Putinism—an authoritarian corrupt means of governing.  It offers for the Macedonian people and the world the hope that peace and stability can prevail because of continued trust in European and transatlantic institutions rooted in democracy.  A failed referendum would be a win for extreme nationalists and Russia, a loss for democracy, rule of law and quite possibly, peace.

Evelyn Farkas is a nonresident senior fellow in the Atlantic Council’s Future Europe Initiative, Eurasia Center, and Scowcroft Center for Strategy and Security. From 2012 to 2015, she served  as deputy assistant secretary of defense for Russia/Ukraine/Eurasia, responsible for policy toward Russia, the Black Sea, Balkans, and Caucasus regions and conventional arms control. Follow her on Twitter @EvelynNFarkas.