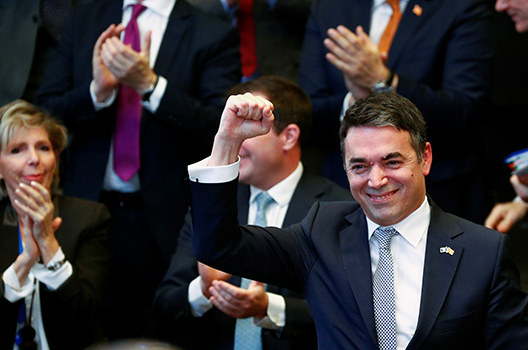 The signing by NATO’s twenty-nine members and Skopje of an accession protocol that would make the future Republic of North Macedonia the Alliance’s thirtieth member represents “a victory for stability, security, and reconciliation in the Western Balkans,” according to Michael Carpenter, a nonresident senior fellow in the Atlantic Council’s Eurasia Center.

“Today the Western Balkans have turned a page,” said Carpenter. “Common sense and regional reconciliation have prevailed over divisions and discord.”

The accession protocol was signed in Brussels on February 6. Each NATO member state must now ratify the protocol.

“This is a historic day,” Macedonian Foreign Minister Nikola Dimitrov said in Brussels, adding “it has been a long journey.”

The signing of the accession protocol follows the passage of a name deal between Macedonia and Greece. Under the deal, Macedonia’s name will change to “the Republic of North Macedonia” once Greece ratifies the NATO accession protocol, potentially as early as February 8. The name deal—known as the Prespa Agreement—was agreed to by Macedonian Prime Minister Zoran Zaev and Greek Prime Minister Alexis Tsipras in June of 2018 and was ratified by both nations’ parliaments in January.

Dimitrov praised the leadership of Zaev and Tsipras in getting the contentious agreement passed, explaining that “what they dared to do was to invest political capital for the benefit of the two people of the two nations, and the whole region, and NATO as a family and alliance.” Now that Macedonia will be part of NATO, Dimitrov declared, “we will never walk alone again.”

“This achievement,” Carpenter explained, “was neither inevitable nor easy, and many spoilers, including Russia, tried to scuttle the deal.”

Stoltenberg said he was confident the future North Macedonia would provide value to the Alliance, despite its relatively small size. Macedonia, Stoltenberg explained, had already helped NATO by “contributing to our security mission in Afghanistan, promoting regional cooperation in the southeast of Europe, and… implementing major reforms.” Bringing Skopje into the family, he added, will also “contribute to stability in the southeast of Europe, that is important to the whole Alliance.”

Stoltenberg said that there was a “clear commitment from the government in Skopje to meet the NATO guideline” on defense spending by 2024, and assurances that the country would continue progress on defense modernization and general domestic reforms. Dimitrov added that his country will not only work to make progress in their own society, but will work with their new allies and regional partners to do “everything we can to make sure that our region…is more predictable, more stable, and more prosperous.”

For the future North Macedonia, Stoltenberg said, NATO membership will give Skopje an “equal voice in shaping the decision we take as allies,” while also joining a common defense pact that “keeps almost one billion citizens across Europe and North America secure.”

The future accession of North Macedonia, Stoltenberg said, “shows that NATO’s doors remain open for countries that meet NATO standards and adhere to NATO’s values of democracy, the rule of law, and individual liberty.”

Speaking with Dimitrov one day before the accession protocol was signed, Atlantic Council Executive Vice President Damon Wilson said that despite current disagreements within the Alliance, “one of the most important signs of the dynamism and health of our Alliance is that nations on its periphery still believe it is strategically valuable to be part of NATO.”

Stoltenberg used the example of Montenegro to explain that the ratification process could take as long as a year but maintained that he was “very confident that that ratification will also take place in a smooth way. We don’t expect any surprises.” Until full ratification, Stoltenberg explained, the future North Macedonia will take part in NATO meetings and operations as an invitee. Zaev will also be invited to the NATO leaders’ meeting in December, which Stoltenberg announced would be hosted in London.

Image: Macedonian Foreign Minister Nikola Dimitrov raises his fist during a signature ceremony of the accession protocol between the Republic of North Macedonia and NATO at the Alliance headquarters in Brussels, Belgium February 6, 2019. (REUTERS/Francois Lenoir)