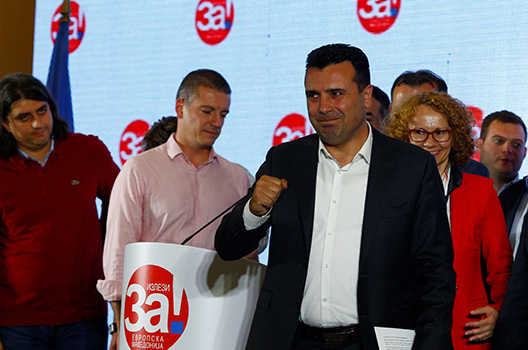 Macedonia's PM Zoran Zaev gives a speach during a referendum night on changing Macedonia's name that would open the way for it to join NATO and the European Union in Skopje, Macedonia September 30, 2018. (REUTERS/Ognen Teofilovski)

The ambivalent results of the September 30 referendum in Macedonia – more than 90 percent voting yes, but below 40 percent turnout – understandably have caused many to doubt whether the small Balkan nation will remain on track to join NATO and the European Union (EU).

This analytical gloom ignores the fact that Macedonia has been on the brink of dramatic failure frequently during the past three years of its domestic political crisis and, yet, at each stage, its leaders manage to advance the country to a better position. This has not been a linear process. Nonetheless, over this period, Macedonia’s democracy and its European aspirations have decisively advanced.

There are two key reasons why. First, despite sharp partisan differences, all political forces in the country agree on a Macedonia embedded in the West and its institutions (NATO and the EU). Second, against high odds, Zoran Zaev has maintained a singular determination, optimism, and tenacity to ensure his country overcomes its twenty-seven-year dispute with Greece, a decade of stagnation, and its historic estrangement with Europe.

When the polls closed in Macedonia on Sunday, September 30, the results that began trickling in from the State Electoral Commission were mixed. While the proportion of citizens voting “YES” for the name deal that will likely ensure Macedonia’s future in NATO and the EU was higher than officials had hoped, overall turnout was lower than anticipated at only 37 percent.

Prime Minister Zaev reacted rapidly, harnessing the momentum from more than 600,000 votes for a European Macedonia to call for the parliament to approve the name deal (the Prespa Agreement) quickly or to face early parliamentary elections.

The post-mortem on the low turnout will take time, but a few specific circumstances likely contributed in this case:

First, flawed voter registration data set up the “YES” campaign for an insurmountable hurdle from the beginning. Macedonia is a country of less than 2.1 million people, but there are 1.8 million citizens listed on the official voter registers. To achieve 50 percent turnout based on this data, approximately 900,000 votes needed to have been cast. However, there has not been a census in almost twenty years, and a lack of economic opportunity at home has led to well-documented “brain drain.” Many experts agree that there are no more than 1.4 million eligible voters left in Macedonia, but without a full census there is little concrete data that can point to exactly how many people were available to vote on September 30. In an extreme case, during August, our Atlantic Council-Ohrid Group team visited one town which officially claimed 4,000 residents where only several hundred remained. At the same time, the process for absentee voting is long and arduous, disincentivizing even the Macedonians who are only temporarily living abroad from participating in the election.

Second, the “YES” campaign overestimated its ability to mobilize key groups of voters. Despite a government-led campaign that included significant public engagement and media outreach across the country, voters from Prime Minister Zoran Zaev’s ruling SDSM party, who largely support the name deal, did not turn out in expected high numbers. Similarly, the campaign assumed that ethnic-Albanian voters, whose parties are largely aligned with the ruling coalition and who overwhelmingly support Macedonia’s future integration into NATO and the EU, would turn out in high numbers. Whether ambivalent about the name of the nation or of SDSM’s effort to woo Albanians into the party, these communities did not turn out in especially high numbers. Furthermore, too many in the electorate perceived the vote as a test of political forces rather than a referendum on the future of the nation.

Finally, the “YES” campaign underestimated the power of the boycott effort. What started as an anonymous #bojkotiram hashtag and retweet effort developed into a well-coordinated campaign that included broad engagement on social media networks including Facebook and Twitter, new and anonymous websites, flyers handed out in restaurants and on the streets, and protests featuring glitzy stages and sound systems. Such a sophisticated effort, with a campaign infrastructure that rivaled that of the major political parties, is unlikely to have been an organic expression of grassroots opinion. There will be more to the story to be told about the funding and organization of the boycott campaign. The net effect was to create a climate in which many voters felt uncomfortable if not intimidated in speaking out about why they would vote or even showing up to vote.

The result leaves both sides in a gray area, with no clear victor. Opponents of the vote, including VMRO-DPMNE leader Hristijan Mickoski, have already stated that the failure to reach 50 percent turnout means the referendum is invalid. On the other hand, the fact that an overwhelming 91 percent of people who did vote cast their ballot in favor of “YES” cannot be discounted.

The focus now shifts to Macedonia’s parliament, where a two-thirds majority is needed to pass the constitutional amendments relating to the name deal. The SDSM-led ruling coalition can be assured of a maximum of seventy-one votes but it will need at least nine additional MPs, likely from the opposition VMRO-DPMNE party, to lend support for the agreement to be implemented.

Had the referendum achieved the 50 percent threshold, the additional votes would have been achievable with some old-fashioned horse-trading. Now, however, the picture is not as clear. Leading VMRO figures have stated that they support Macedonia’s integration into NATO and the EU, but not under the current terms. VMRO leadership has yet to present other potential solutions. In the coming days, Zaev will need to convince his political adversaries that there is no viable alternative to the current deal. While the government is not prepared to respond to demands for amnesty for former VMRO leaders, it will need to offer political incentives (and probably security) to a small group of parliamentarians who would be willing to break party discipline and back the deal.

If he is unable to do so, Zaev has indicated that he will call snap elections. This is a high-risk move. But Zaev, who managed to form a coalition after his party received 437,000 in 2016 parliamentary elections, believes he can wield the 610,000 “yes” votes in the referendum to secure a larger majority in parliament. Key VMRO deputies know the consequences of not backing the deal in parliament may be loss of their seats in the next parliament.

But given the high level of polarization and politicization of the name issue, snap elections may not achieve a dramatically different result; and even if early elections resulted in a new government that favors the deal, the deal’s expiration date is getting perilously close.

Technically, the deal anticipates that Macedonia will complete its national procedures by the end of this year. New elections followed by the two parliamentary votes required for constitutional changes would almost certainly push the process into 2019.

The pressure is on, but not only for Macedonia. There is also uncertainty that Greece will be able to fulfill its end of the agreement. While the terms of the name deal do not require Greece to put the issue to a referendum, the agreement still needs to be ratified by the Greek parliament. Greek Prime Minister Alexis Tsipras has already had to survive a no-confidence vote brought by the country’s key opposition party, New Democracy, which opposes the name deal.

With (possibly early) Greek elections on the horizon as early as May 2019, it is critical that the name deal reach the Greek parliament for ratification while Tsipras’ position is still secure. If the timeline for ratification in Macedonia’s parliament slips due to prolonged infighting or early elections, the deal might head to Greece for ratification at the exact moment when Tsipras and his allies in favor of the agreement are most vulnerable to domestic opposition.

Yet like Zaev, Tsipras has already paid any political cost associated with the deal. Furthermore, a failed parliamentary vote in Greece would only accelerate the decline in Tsipras’ chances for re-election in next year’s parliamentary elections, something he will work to avoid. A successful vote in Greece would cement his reputation as Europe’s bad boy turned statesman and position this young leader well to have a bright future in Greek and European politics.

Key to ensuring the success of the deal will be continued support by the United States, the European Union, and NATO for both the Macedonian and Greek governments as they navigate the road ahead. Key will also be to provide patriotic and conservative voters in both Macedonia and Greece a place at the table as part of the deal, not a sense of being side-lined. The big test for these democracies in Southeast Europe is to embrace the concept of compromising to achieve key goals, rather than a winner-take-all approach to politics.

Voter turnout on September 30 was disappointing by some measures, but the vote and the result itself was cause for great optimism as citizens made clear their preference for a European future. This is not the end of the road. This is part of the difficult process of former adversaries becoming allies. This is part of the winding path to completing Europe in the Western Balkans and advancing a vision of a Europe whole, free and at peace.

Graham Brookie is the Director and Managing Editor of the Atlantic Council’s Digital Forensic Research Lab. Follow the DFR Lab on Twitter @DFRLab.